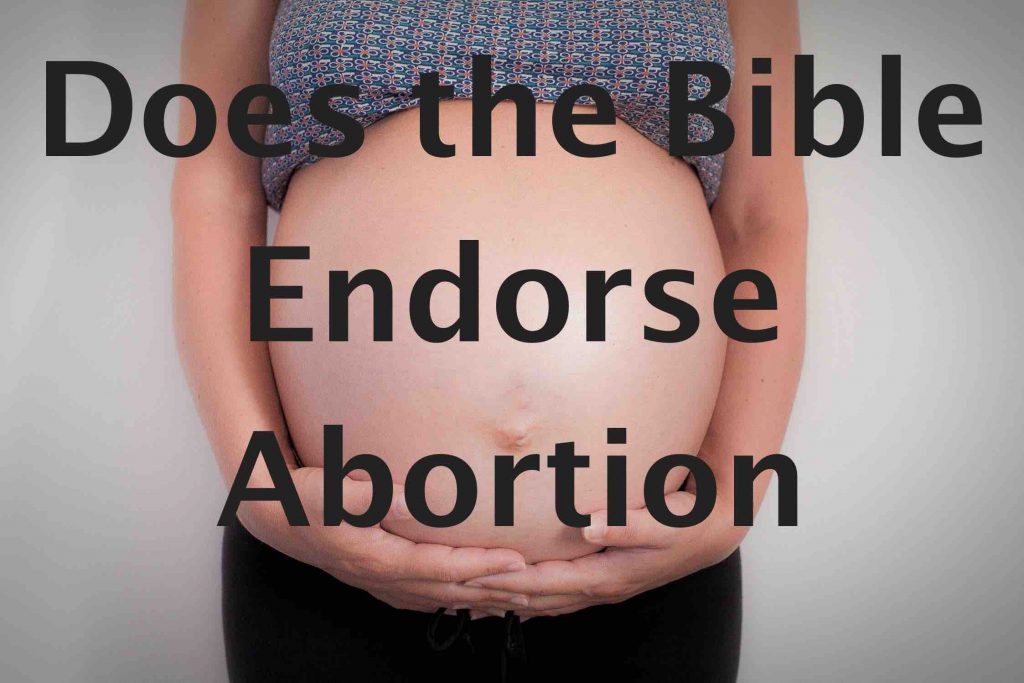 A student at Augustana College approached me and asked how I could worship a God that endorsed abortion. I didn’t handle the objection well. So, when I got home I opened my Bible and studied.

My friend, Mark Spence, taught me something very important several years ago. He said, “Study the last question asked.”

Here’s what he meant.

If you spend any time on the streets engaging people in apologetic, worldview, and gospel conversations, someone is bound to ask you a question for which you don’t have an answer. It’s happened to me several times, over the years.

One mistake Christians make is shying away in such circumstances from saying, “I don’t know.” It’s okay to admit that you don’t have an answer to a question. The person with whom you are speaking might see it as a “gotcha” moment, but it’s not. God’s person and character, the legitimacy and authority of Scripture, His determined way of salvation, and the salvation of the soul of the person in front of you is not contingent upon your ability to correctly answer every question you are asked.

In suggesting to study the last question asked, Mark Spence is saying this: when you’re asked a question for which you do not have an answer, make that a subject for study. This way, the next time you are asked the question you will be able to provide a good answer (1 Peter 3:15).

This nugget of wisdom Mark imparted to me years ago is the impetus for today’s article.

Elder Nick Rolland and I spent some time this morning at Augustana College. It was a frigid morning. While the conversations were few, the Lord did allow us to distribute more than 100 gospel tracts during the hour-or-so we were there.

As I stood on the sidewalk, I looked up the drive, which is part of the route many students take to make their way to different parts of the campus. I saw a young man walking down the drive toward me. He had both a look in his eye and a determination in his step that gave away his intentions. He was going to give me a piece of his mind.

Without saying “hello,” Nate launched into his attack.

“So, how can you worship a God that endorses abortion?” He asked with a sarcastic and defiant tone. It was immediately obvious that Nate wasn’t looking for a conversation, but rather to simply make his point.

“Yes it does!” Nate protested.

Nate began to feverishly push the buttons on his phone. He was looking up a passage of Scripture he believed supported his claim.

“Numbers 5:11-27 says that if a woman commits adultery and she drinks a certain potion she will miscarry. Your God allows for the abortion of babies whose mothers commit adultery.”

“You’re taking that passage out of context.” I replied.

The answer I gave was not a good one.

Nate and I talked for a few minutes. There was no reasoning with him. His mind was made up.

As Nate walked away, I asked him, “Nate, is that going to be your defense when you stand before God–that you believe God endorses abortion?”

“Nate, your belief that God endorses abortion will not wash away your sin–the sins for which you will be judged. You need Christ. Turn to Christ and live, Nate.” I said.

Nate just shook his head, waving the gospel tract I had given him in his hand, as he continued back up the drive.

“Where did Nate get the idea that Numbers 5 endorses abortion?” I thought to myself. I was familiar with the passage, but I didn’t recall it saying anything about the potion causing an adulterous, pregnant woman to miscarry as part of the curse against her.

I finished my time of ministry with Elder Nick determined to find the answer to the question when I got home.

And here we are.

Neither my ESV or NASB bibles said anything about miscarriages in Numbers 5. So I turned to BibleHub.com to look at multiple, parallel translations of the passage. What I discovered was interesting.

Of the many tranlsations I viewed, only two versions of one translation used the word “miscarry” in the passage: The NIV and the NIVR. The NIV translation of Numbers 5:11-27 reads as follows:

Then the Lord said to Moses, “Speak to the Israelites and say to them: ‘If a man’s wife goes astray and is unfaithful to him so that another man has sexual relations with her, and this is hidden from her husband and her impurity is undetected (since there is no witness against her and she has not been caught in the act), and if feelings of jealousy come over her husband and he suspects his wife and she is impure—or if he is jealous and suspects her even though she is not impure— then he is to take his wife to the priest. He must also take an offering of a tenth of an ephah of barley flour on her behalf. He must not pour olive oil on it or put incense on it, because it is a grain offering for jealousy, a reminder-offering to draw attention to wrongdoing.

“‘The priest shall bring her and have her stand before the Lord. Then he shall take some holy water in a clay jar and put some dust from the tabernacle floor into the water. After the priest has had the woman stand before the Lord, he shall loosen her hair and place in her hands the reminder-offering, the grain offering for jealousy, while he himself holds the bitter water that brings a curse. Then the priest shall put the woman under oath and say to her, “If no other man has had sexual relations with you and you have not gone astray and become impure while married to your husband, may this bitter water that brings a curse not harm you. But if you have gone astray while married to your husband and you have made yourself impure by having sexual relations with a man other than your husband”— here the priest is to put the woman under this curse—“may the Lord cause you to become a curse among your people when he makes your womb miscarry and your abdomen swell. May this water that brings a curse enter your body so that your abdomen swells or your womb miscarries.”

“‘The priest is to write these curses on a scroll and then wash them off into the bitter water. He shall make the woman drink the bitter water that brings a curse, and this water that brings a curse and causes bitter suffering will enter her. The priest is to take from her hands the grain offering for jealousy, wave it before the Lord and bring it to the altar. The priest is then to take a handful of the grain offering as a memorial offering and burn it on the altar; after that, he is to have the woman drink the water. If she has made herself impure and been unfaithful to her husband, this will be the result: When she is made to drink the water that brings a curse and causes bitter suffering, it will enter her, her abdomen will swell and her womb will miscarry, and she will become a curse.

In addition to the NIV and NIVR, I looked at 26 other translations of the text. None of the 26 made any mention of the woman caught in adultery miscarrying a baby.

Nate, like many unbelievers, engaged in translation-picking. He found a poor translation of the text to support his eisegetical claim that the Bible endorses abortion.

What the Passage Actually Says

Numbers 5:11-27 makes no mention whatsoever of miscarriages, abortion, or even pregnancy. Simply looking at the Hebrew text, in verse 27 for instance, shows this to be the case.

Since I’m not the sharpest tack in the box, I also spent some time reading commentaries on the passge. While many commentaters agree that the curse the adulterous woman faced included negative impact on her reproductive organs, I did not read one commentary that mentioned a word about the curse causing the miscarriage of a living child in the womb.

Question: “Is Numbers 5:11-31 referring to God causing an abortion? What was the jealousy offering?”

Answer: Numbers 5:11-31, describes an unusual procedure, known as the jealousy offering, a husband could use to determine if his wife had been unfaithful to him. Essentially, the husband and wife would come to the priest, the priest would then create a concoction of unpleasant ingredients, and then the wife would have to drink the concoction. If the wife was guilty of adultery, she would get sick and her belly would swell. If the wife was innocent, God would protect her from the effects of the concoction. There was nothing magical about the concoction. It was entirely a matter of God using the result to demonstrate whether a woman was innocent or guilty. So, in summary, Numbers 5:11-31 affirms the truth of Numbers 32:23, “Be sure your sin will find you out.”

Some propose that Numbers 5:11-31 refers to God causing an abortion. The 2011 edition of the NIV mistakenly states that the drink will cause miscarriage in Numbers 5:21-22, 27. However, this is not what the passage is talking about. Pregnancy is nowhere mentioned, or even hinted at, in the text. The only thing that even sounds like pregnancy is the guilty wife’s stomach becoming bloated, but even in that instance, it has nothing to do with pregnancy. Further, the passage does not say that drinking the concoction would cause an abortion/miscarriage. While drinking a poisonous mixture of ingredients could very well cause a miscarriage, that is not what this text is speaking of.

If a wife was found guilty, the punishment was death (Leviticus 20:10). If the wife was found innocent, she would be “cleared of guilt” and “able to have children” (Numbers 11:28). So, again, Numbers 5:11-31 does not refer to abortion in any sense. Rather, it is describing a method that God allowed to be used to determine if a wife had committed adultery against her husband.

I met Bentley and his grandfather Steve while fishing at Pride Lake, in Scott County Park. This is the story of God's gracious providence. A three-Fold Purpose For me, there is a three-fold purpose … END_OF_DOCUMENT_TOKEN_TO_BE_REPLACED