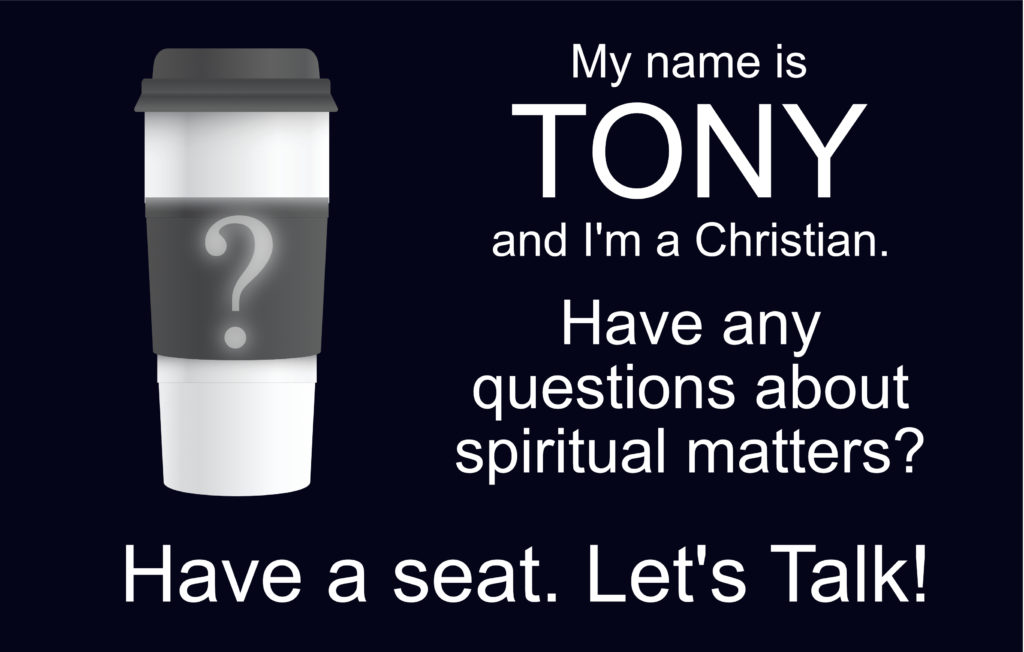 I spend a lot of time writing in coffee shops. Coffee shops are popular gathering places for all kinds of people–people who need to hear the gospel.

As stated above, I spend a lot of time working and writing in places like Starbucks. I’ve done so for many years. I concentrate better with white noise in the air. The din of coffee grinders, cash registers, and people talking about everyone and everything under the sun actually helps me focus my attention on the task at hand, whether that is reading or writing. Put me in a quiet room and my mind races. I daydream. I will get more work done in a public coffee shop than I will in a quiet home office.

One day four years ago while writing in Starbucks, I began to think of how I might add an element of evangelism to my many hours of writing. And then it hit me. I don’t know if it was an original thought. Everything I know I’ve learned from others.

“What if I put a sign on my laptop lid inviting people to sit down and talk about spiritual matters.” I thought.

I ran the idea by then Cross Encounters Ministries manager, Richard Story, who quickly got to work at designing a sign. The sign, which featured the ministry logo in the center, simply said, “Have a Seat. Let’s Talk about God.”

Soon after receiving the sign, I headed to Starbucks to give it a try. Not long after sitting down with my coffee I was approached by a man we’ll call “Bob.” You can read the story, here.

My first laptop lid sign was permanently affixed to my laptop lid. Like everything else, laptops get old and die. I’ve had a couple laptops since that time, but never got around to putting a sign on the lids.

Recently, a couple in my church asked me to ghostwrite a book they want to write to get the word out about their business. Ghostwriting a book means an increase in hours, at Starbucks. That thought brought to mind my old, laptop lid sign. I decided it was time to get a new one. But I wanted this one to be different.

Having determined how I wanted the sign to read, I contacted my long-time friend, Elijah Hankins, and asked him to design the sign. The result: the sign pictured above.

Again, I wanted this new sign to be different. I wanted it to be more overt. I want people to sit down. But I also want them to have an idea of with whom they will be talking, before they sit down. So, the sign includes my first name and these key words: “I’m a Christian.”

Those simple words, “I’m a Christian,” have been used by God to literally shape human history. Untold millions of people have been martyred over the centuries because they would not recant for saying those words.

“I’m a Christian.” My own life changed forever the first time I publicly uttered those words. The occasion was the evening after I cried out to God to forgive me and save me, through faith in Jesus Christ.

I was a young deputy sheriff, serving with the Los Angeles County Sheriff’s Department, in the 13th month of what would be a 20-year career. I was young, self-righteous, prejudiced, perverse, hateful, and sinfully enjoyed my newfound power and authority. At the same time, I saw myself as a good person. In fact, I shrouded the belief that I was better than most people in a porous veneer of false humility.

“I’m a Christian”: A Personal Testimony

The night following my conversion was a night like most nights in the medium security facility, in which I worked. It was time for the evening inmate population count. On this night, I was working as a “prowler.” “Prowler” was the nickname given to deputies assigned to roam about the facility or a specific compound, making sure the residents were behaving themselves.

While compound deputies conducted the evening count, I sat on a chair in the compound doing nothing, really. Having completed the count of their assigned dorms, two deputies approached me and said, “Come on, Tony. It’s time for court.”

I knew what they meant. “Court” was the term we used to described the meting out of disicpline upon inmates in ways not prescribed in the department’s “Policies and Procedures” manual. Simply put: after the evening count we would remove a select few inmates from their dorms–inmates who committed breaches of etiquette, such as back-talking or otherwise disrespecting a staff member. The inmate(s) was escorted out of his dorm and taken to a nearby, discreet location–usually a place out of sight.

We then engaged in a disciplinary and re-education process in which we inflicted emotional and physical pain upon the inmate, without leaving any marks on the inmate’s body. The abuse ended with a stern warning not to speak of what happened.

Any time I experienced a twinge of conscience after participating in one of these “court” sessions, I quickly suppressed the truth in unrighteousness (Romans 1:18). I simply convinced myself that the inmate deserved to be treated the way I treated him.

“Come on, Tony. It’s time for court.” One of the two deputies said.

Filled with the fear of man, but knowing I could do no other, I said, “I became a Christian last night. I don’t think God wants me to do that anymore.”

The two deputies laughed. They knew me well. At least they knew who I was up to the day before this particular night.

“No; really. I’m a Christian, now. I don’t want you guys to get hurt, so I will come and help you if you get into a fight. But I don’t think God wants me to do things like that anymore.”

The looks on the deputies faces were not positive ones.

I sat their alone in the compound stunned by what just happened. God had changed my heart.

Almost immediately I lost friends, including the two deputies to whom I had given testimony that night. Mocking notes began to show up in my work mailbox. “Jesus Freak” was written on the chalkboard in the briefing room.” Many of my fellow deputies no longer wanted to work with me. One deputy (who years later would be dismissed from the department after an internal investigation revealed an inappropriate relationship with an underaged girl) went so far as to conspire with inmates to both test and try to undermine my integrity. While hypocritically claiming to be a Christian, he was determined to prove I wasn’t one.

Another Kind of Coffee Shop Evangelism

Putting a sign on my laptop lid is not my first foray onto the coffee shop evangelistic battlefield. I’ve tried other evangelism methods inside coffee shops. One method I called “Eavedropping.”

In “Eavesdropping” I wasn’t the one doing the eavesdropping. I made it possible for others to eavesdrop on my phone conversations.

The plan was simple. I would enter Starbucks, grab a cup of coffee and have a seat. I then called a friend and asked him to call me back and role-play a gospel conversation with me. Before my friend returned my call, I made sure the volume on my cell phone was set to maximum. This way every potential eavesdropper would hear the ring and, like Pavlov’s Dog, would begin to listen to my side of the conversation.

“Hey, John.” I might say. “How are you doing. Thanks for calling me back. Have you given any thought to our conversation from the other day? You have? Wonderful.

“So, just by way of reminder, let’s go through that Good Person Test, again.”

I would repeat snippets of what my friend said on the other end of the phone, in order to provide easvesdroppers with context. While I communicated the law and the gospel to my friend on the phone, I looked throughout the coffee shop to see who might be listening. After I called me friend on the phone to repent and believe the gospel and said goodbye, I got up from my seat. As I left the coffee shop, I made sure to stop by the table of each person I had seen eavesdropping and give them a gospel tract.

I practiced this form of evangelism during the evangelism “Cage Stage” of my life. I was so on fire to open-air preach everywhere and anywhere that I was utterly obnoxious about it (some may say I haven’t changed a bit). The above evangelistic ploy allowed me to preach inside Starbucks without preaching inside Starbucks–if you know what I mean.

I much prefer using a sign on my laptop lid to draw people into conversations than using the ruse of a phone conversation to open-air preach indoors.

I am writing this article from inside my favorite, local Starbucks. While no one today has sat down to talk, many people have read the laptop lid sign. As with sign evangelism or crosswalking, there is a lot more fishing than catching. But when a fish is caught, when a conversation is initiated, it is because the other person made the first move. I’m simply providing the means and the opportunity for them to do that.

I have found that the gospel conversations I have, when the first contact is initiated by the other person, tend to be deeper, more meaningful, and rarely antagonistic. This is NOT AT ALL to say Christians shouldn’t initiate conversations with unbelievers. On the contrary: Christians should regularly and frequently do so. People are dying. People are going to hell. And they need Jesus. Talk to them! What I proffer to you today is simply ANOTHER way to engage in evangelism.

Helping You, Helping Us

Since first posting the picture of my new laptop lid sign, and since sharing this idea in my most recent ministry newsletter, I have received a number of inquiries from people who want to try this form of evangelism. Praise the Lord.

I would love to help you get started in your Coffee Shop Evangelism efforts. Let’s work together to get it done.

For a $30 donation to the ministry, I will send you one of these customized signs.

Simply make a donation to the ministry, and then email me to let me know that you made the donation and would like to receive a laptop sign. PLEASE include your full name and full mailing address in your email, along with how you would like your name spelled on the sign.

Garry from San Diego is the first person to ask for a laptop lid sign. Garry wrote:

“I hope this finds you well and encouraged. I’ve recently read your newsletter and I’d like to have a laptop lid sign. I’ve just donated $30.00 to your ministry for the sign . . . Thank you for the hard work you do for His glory!”

While Garry is the first to order a laptop lid sign, I’m hopeful he will not be the last.

Please join me and Garry in turning our visits to the coffee shop into evangelistic outreaches. And let’s do it all for the glory of Christ!

Evidence is very important in a courtroom, and I try never to rely on evidence when engaging in evangelistic apologetics. Bike Patrol In the Summer of 1998, I was assigned to the Career Offender … END_OF_DOCUMENT_TOKEN_TO_BE_REPLACED