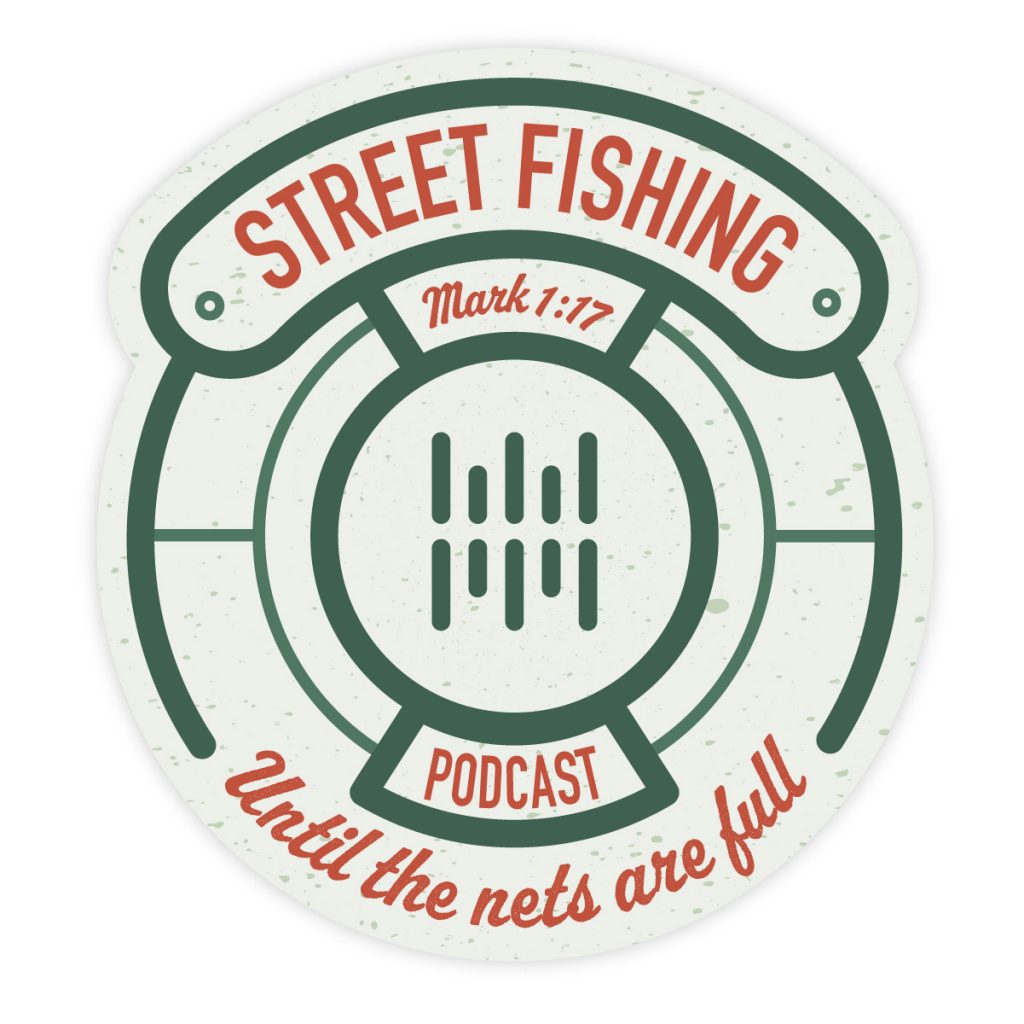 Thirteen years ago I co-hosted my first radio program. I’m getting back into the broadcasting game with a new podcast called “Street Fishing.”

How I Got Into Radio and Podcasting

Way of the Master Radio

In 2005, I published my first book, “Take Up The Shield.” It was published by the same publishing house that has published a goodly amount of Ray Comfort’s material. Through the publishing experience, I was afforded the opportunity to meet and get to know Ray Comfort.

In October 2006, I began to serve as a “street fishermen” for the Way of the Master Radio program. My role was to find people on the streets and convince them to get on the phone so Ray, Kirk Cameron, and/or Todd Friel could share the gospel with them. It was Todd Friel who gave me the moniker “The Lawman.” I would serve in this capacity until 2008 when the program aired for the last time. Soon thereafter, Todd Friel would start Wretched Radio. From time to time, in the early days, Todd would have me on the program or play portions of my open-air videos.

In the Fall of 2007, a couple of friends of mine had started a radio program. They called it “Last Words Radio.” The program was on a very small, Spanish/English radio station, based in Pasadena, CA. They put a request for callers out on an evangelism message board. So, the following Saturday afternoon, while sitting in my car outside the house (I wanted to make sure I had good cell phone reception), I put a call into the show.

I chatted with the hosts for a few minutes about open-air preaching, serving with Way of the Master Radio, and street evangelism in general. Within minutes after the show ended, I got a call from one of the hosts, asking if I would co-host the show the following week. It sounded like fun, so I agreed.

The radio studio was as small as the station’s power. The dirty-walled room was smaller than a child’s bedroom. The program’s host and I playful bantered back and forth, talked about evangelism, and answered questions from a couple of callers. It was fun.

The program’s team of four or five people and I walked out of the building where the studio was located. Once outside, the team stood in a circle, surrounding me. They just stood there, staring at me.

Did I do something wrong? Did I say something I shouldn’t have on the show?

The host looked at me and said, “We want you to be a permanent co-host on the show.”

The host ran down a list of reasons why they wanted me on the show. I already had a face for radio, but it was more than that.

Just a few weeks later, we all found ourselves in the board room of 99.5 FM, KKLA Los Angeles, one of the largest Christian Radio stations in the country. We were there to pitch a Way of the Master-like radio program to the station. Unbeknownst to us, the station had been trying to get Way of the Master Radio on the station, but the two sides just couldn’t work out some of the particulars.

No sooner had we told them what kind of show we wanted to produce that the station’s representatives offered us a half-hour time slot on Saturday nights, at half-price. We had no idea how we were going to raise the $3,000+ it would cost each month to produce the show, but we accepted the offer anyway. It was too good an opportunity to pass up.

On January 5, 2008, Last Words Radio aired for the first time on KKLA. Just a couple of days prior to this, I was hired by Living Waters to create and lead the Ambassadors’ Academy. It was an eventful week.

For the next year or so, I co-hosted the program. I loved it. I loved everything about it.

Eventually, money became an issue and we had to cancel the show.

Podcasting, originally called “audioblogging,” began in 2004. It began at about the same time broadband internet access came on the scene. Former MTV host Adam Curry and software engineer Dave Winer are credited with producing the first podcasts. By 2008, podcasting was still relatively new in Christian circles. A platform called Blogtalk Radio was the place for hosting podcasts.

I pitched the idea of a podcast to Ray Comfort, hoping he would see it as an inexpensive way to fill the void left by the absence of Way of the Master Radio and as a means of promoting the Ambassadors’ Academy. Ray agreed and allowed me to run with it.

My choice for co-host was the same person I picked to be the first Ambassadors’ Academy Team Leader: Bart McCurdy. Bart was hundreds of miles away in Redding, CA. In addition to co-hosting the program, Bart also served as a “street fisherman,” finding people to put on the phone so I could share the gospel with them.

Over the next two years, Bart and I produced 65 episodes of Ambassadors’ Alliance Radio, which saw almost 90,000 listens/downloads.

In 2011, Chad Williams (my assistant) and I pitched the idea of an Internet-based video program to Ray. Ray didn’t like the idea, at first. Ray was, as he always is, very busy. Both Way of the Master Television and the Living Waters University videos, along with stand-alone documentaries like “180,” were filling much of his time. Writing and co-hosting yet another program didn’t appeal to him.

Chad and I convinced Ray that all he would have to do is show up and be himself. Chad and I would handle all of the writing and production, with the help of very talented members of the Living Waters team. Ray hesitantly agreed. But after we shot the first episode, Ray said, “That was fun!” He was hooked. I had the privilege of co-hosting some 400 episodes of “On the Box,” with Ray Comfort. The 400 episodes racked up more than one million views on YouTube. There probably were no episodes as funny as Episode #100. We almost set the studio on fire.

My time with Living Waters drew to a close in July of 2012. That is when Cross Encounters Ministries began. A short time later, with the help of my friends Richard Story and Chris Hohnholz, I started Cross Encounters Radio. Together we produced over 160 episodes, which garnered almost 240,000 listens/downloads.

Rich and Chris are still at it. Together they host a podcast called Voice of Reason Radio. 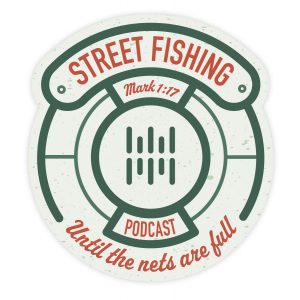 I’ve spent the last several years away from the podcast game. With the encouragement of Christian brothers like Virgil Walker and Dawain Atkinson, as well as the encouragement and support of my pastors, I’ve decided to give it another go.

My new podcast will be called “Street Fishing.” The program’s format is as simple as the name implies.

With the help of “street fishermen” around the country, I will communicate the gospel to whoever they can convince to get on the phone. No scripts. No planning. No preparation. Just impromptu gospel conversations with random people out there, in a world in desperate need of the Savior.

The program will also include follow-up conversations with the street fishermen. What happened after the guest got off the phone? I’m going to want to know. Won’t you?

Another important element of the program will be what I will call “Chalk Talk.” After I communicate the gospel to the guest and then hear from the street fishermen, I will spend a few minutes reviewing the conversation. Why did I say what I did? Why did I take the conversation in this direction or that? What could I have said or done better?

My hope is that each episode will be more than entertaining, but evangelistic to the point that Christian listeners will want to share it with their unsaved friends and family. I also hope the program will be edifying to my brothers and sisters in Christ who take the time to listen. By the time each program ends, I want Christian listeners to be better equipped to communicate the gospel than they were when the program began.

I’m putting together a wonderful team of “street fishermen.”

I’ve converted a desk in my basement into a very humble podcast studio.

Intro and exit scripts have been submitted for voiceover work.

The theme music has been selected.

And I hope to record my first “Street Fishing” segment tomorrow.

I’m excited to start this new podcast. I hope it is something to which you will listen and enjoy.