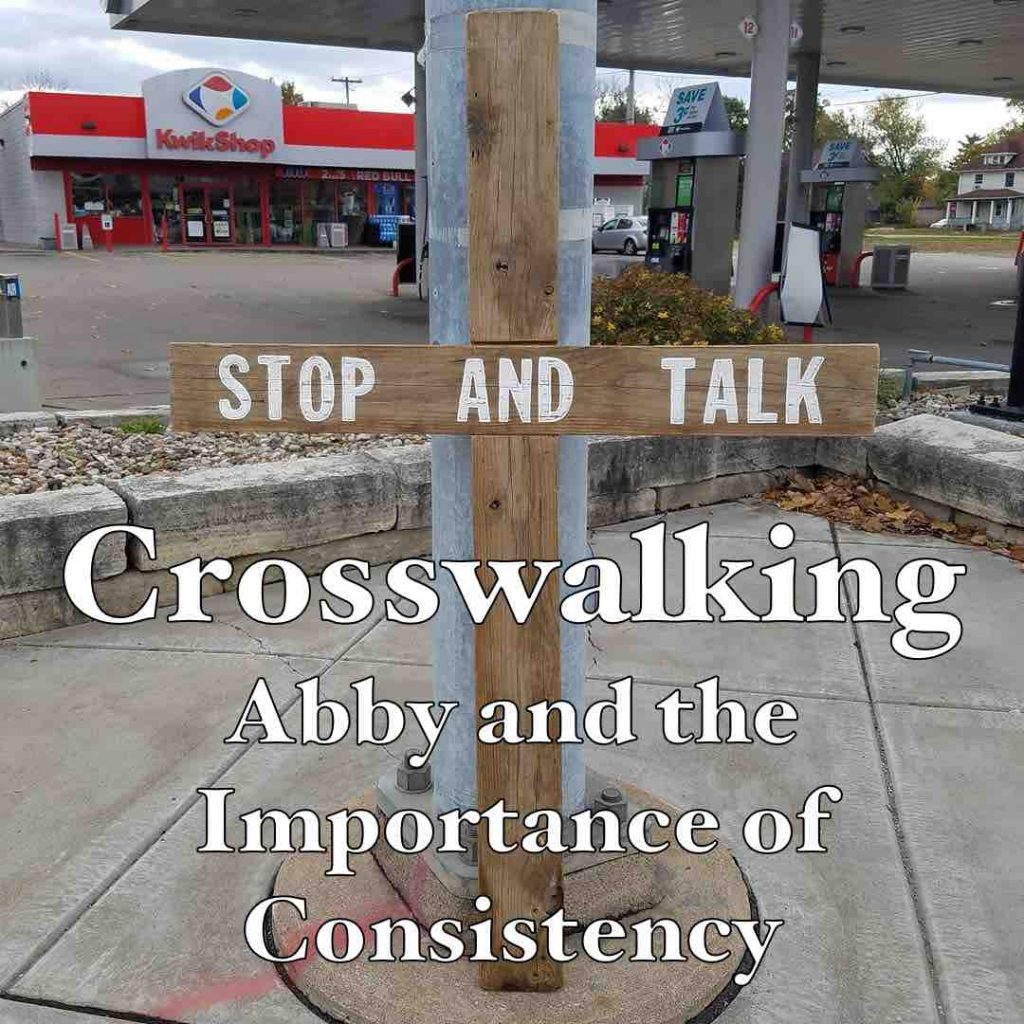 This article is the first in a two-part series.

Abby approached me as I stood on the corner, with my cross. The first thing she said to me served as a reminder of the importance of consistency.

I spent a couple of hours yesterday morning on the corner of Harrison and Locust, one of the busiest intersections in my city. As I’ve likely mentioned in previous articles, it is one of my favorite intersections for crosswalking. I usually stand at the southwest corner, near the Kwik Shop gas station. The gas station provides the best place at the intersection, for people to park if they want to stop and talk.

For a Saturday morning in the midst of a pandemic, there was quite a bit of traffic passing through the intersection. The sun was bright. A bit of wind kept the temperature cool, but it was warmer than it has been. We had a few inches of snow the previous day, which had already melted. I think once Spring actually arrives, it will last about a week before Summer sets in. Now in my fourth year of living in Iowa, I’m starting to get used to the Midwest’s patternless weather patterns.

Yesterday marked 26 of the last 27 days I have been on the streets of my community, with my cross.

There were fewer waves than usual yesterday. My guess is that people in my town aren’t as demonstrative at 9:00 AM on a Saturday morning. At least none of the waves I received yesterday were of the single-finger variety.

A couple of ambulances and a few patrol cars passed through the intersection. All first responders who pass my way while I’m crosswalking receive salutes.

A man walked to my corner while making his way to the gas station’s convenience store. He took a gospel tract from me. On his way back, he stopped to talk. He is in Davenport on business. He’s from Southern California, which gave us something in common. He told me that he’s thinking of relocating to the Phoenix area soon. So, I told him that if he is looking for a good church he should check out my friends at Apologia Church. It’s not every day I get to recommend a church in Arizona, from a street corner in Davenport.

“Well, I’m going to get going,” the man said, as he started across the street.

“Okay. Good meeting you. Don’t forget to look up Apologia Church. Jeff Durbin is the pastor,” I said.

The man looked back at me and waved with the hand holding the gospel tract I gave him. He then stuck the tract in his back pocket. I love seeing that. Paper missionaries are able to go to places I can’t go. I prayed the man would read the tract later, in the comfort of wherever he was staying, and that the Lord would save him.

I turned my attention to the patiently waiting young lady. I introduced myself. She told me her name was Abby.

“I’ve Seen You Before”

Abby appeared to be in her early twenties. She was attractive, modestly dressed, and wore a sweet smile. Her eyes were bright and seemed to sparkle in the sunlight. I share this because Abby’s appearance did not match her recently troubled past.

“I’ve seen you out with your cross, before. God has told me to stop the other times I’ve seen you–not like a prophecy–I just knew He wanted me to stop. But I didn’t. And then I saw you again today, and God told me again to stop. I wasn’t going to. I told myself I needed to go do laundry. But I had to stop today,” Abby explained.

“Are you a believer, Abby? Do you know Jesus?” I asked.

“And how did you come to faith in Christ?” I asked.

Abby told me what was obviously the Reader’s Digest version of a much longer story. I could tell Abby had already lived a relatively long life, in a short amount of time.

Abby told me about a lifelong battle with depression and anxiety, which eventually led to hospitalization. The trajectory of her life had her on a downward spiral that landed her on the streets and homeless.

Somehow–the way was unclear to me, Abby connected with a pastor and his family in a community just a few miles up the Mississippi River. She told me the name of the church. I wasn’t familiar with it.

By the time Abby finished her story, I had yet to hear a clear testimony of salvation by the grace of God alone, through faith alone, in Jesus Christ alone. It is not unusual for me to meet genuine followers of Jesus Christ who struggle to communicate their testimonies. It is more common for professing Christians I meet on the streets to have no testimony at all. Abby was somewhere in the middle.

I decided to communicate the gospel to Abby by way of sharing my testimony.

Giving Abby the Benefit of the Doubt

No sooner had I finished telling her my story than Abby put her arms around my neck and gave me a hug. It was a sweet gesture, like a daughter hugging her dad.

“Abby, is that the gospel you believe?” I asked.

“How long ago was it that you came to faith in Christ?” I asked.

“It was in February or March,” she answered.

If She Belongs to Christ…

If Abby is a genuine follower of Christ, being asked by a stranger on the street corner to share her testimony just a couple of months post-conversion might explain why she struggled to articulate it.

Abby affirmed the gospel I proclaimed to her, punctuating her affirmation with a hug (not required for salvation). So, I gave her the benefit of the doubt. I thought of her as my sister in Christ.

“Tell me a little about your church,” I asked.

As with her testimony, she struggled to describe her church and her pastor’s teaching. What she did say made me wince a bit. I’m confident I didn’t let it show.

I encouraged Abby to be like the Bereans of old and make sure whatever she hears from her pastors and teachers lines up with the Bible. I told her knowing that as a two-month-old, baby Christian she likely lacks the requisite wisdom and discernment to distinguish truth from some error.

At the same time, if Abby is truly saved, the Lord will protect her and keep her.

Once I got home, I did some checking. The church she attends is decidedly charismatic and their worship features Bethel Music. The pastor begins his “welcome message” on the church website, with these words: “I believe in God’s crazy, reckless, mad love for you.” I turned it off at that point.

I’m concerned about Abby. But again, if she has been adopted by God the Father and is a co-heir with Jesus Christ, God will protect her and keep her.

“Thank you so much for talking to me,” Abby said. She gave me another hug.

“I’m very glad you stopped to talk. It made my morning,” I replied.

I thanked God for my time with Abby and for answering my request to be able to have a gospel conversation with someone, on the corner.

Join me in praying for Abby.

In Part 2 of this series, we will consider Abby’s story, as it relates to the importance of consistency in public/street evangelism ministry.

I met Bentley and his grandfather Steve while fishing at Pride Lake, in Scott County Park. This is the story of God's gracious providence. A three-Fold Purpose For me, there is a three-fold purpose … END_OF_DOCUMENT_TOKEN_TO_BE_REPLACED