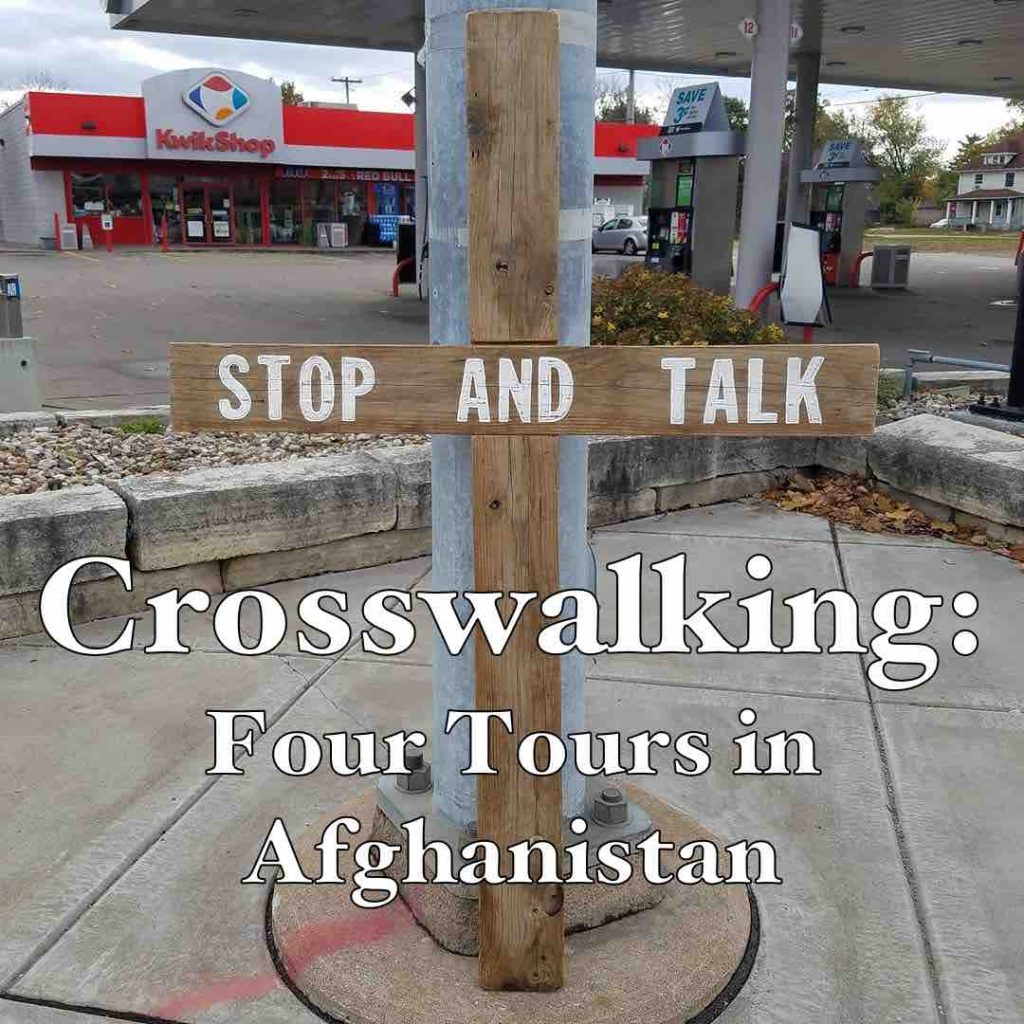 The War in Afghanistan is now in its 19th year. It is the longest war in U.S. history. More than 2,300 U.S. military personnel have been killed. John served four tours in Afghanistan. He made it home in one piece but lost something along the way.

Crosswalking at Kimberly and Marquette

The intersection of Kimberly Road and Marquette Street in Davenport (IA) is less than a half-mile from my home. It is the first intersection at which I engaged in crosswalking in Iowa, following our move to Davenport, in December 2016.

As my familiarity with my new city of residence has grown, I have found other intersections where not only more motorists see the cross, but where more people stop to talk. In the last couple of years, I have spent my crosswalking time at these other intersections. Yet lately I’ve been drawn back to Kimberly and Marquette.

While there is nothing authoritative about this observation, it seems that motorists are a bit friendlier who drive through this intersection than those I see at other places. Not that people are generally unfriendly at any of the intersections where I stand with my cross. In fact, the opposite is true. However, at Kimberly and Marquette, more people seem to smile and wave. Over the course of the last few days, multiple motorists have slowed their vehicles enough to be able to lean out their windows to tell me that they appreciate what I’m doing, encouraging me not to stop.

“What’s Up with the Cross?”

Yesterday I spent a couple of hours later in the afternoon, at the corner of Kimberly and Marquette. Many people, waved, smiled and honked their horns. In fact, I don’t recall receiving a single one-finger wave yesterday. I usually receive at least a few whenever I’m out with the cross. Yes, people truly do hate Jesus and those who represent Him.

At one point, I turned to face southbound traffic on Marquette. As I did, I saw a young man walking toward me on the sidewalk.

“What’s up with the cross?” He asked.

The young man was wearing shorts and a t-shirt. The temperature was finally warm enough, at least by Iowa standards, for such attire. He had tattoos on his calves. Between his teeth and lower lip was a plug of chewing tobacco. His teeth were stained and speckled with debris from his habit. In his hand, he carried a small bag from the Popeye’s restaurant on the corner. The Coronavirus and its related societal shut-downs left him with no choice but to carry-out his meal.

“Well, I’m hoping people like yourself will stop to talk about how their sins can be forgiven and how they can be reconciled to the God everyone knows,” I answered. “I’m Tony, by the way.”

The introduction was immediately followed by one of several greetings that have hopefully only temporarily replaced the handshake: in our case, the fist bump.

“John, do you have any particular spiritual beliefs?” I asked.

“I don’t believe in God anymore,” John replied. I watched his countenance fall as he gave his answer.

“How did you come to that place, John–the place where you would say you don’t believe in God?” I asked.

“You served in the military,” I asked.

“I’ve been out for about a year, now,” John replied.

“What branch of service?” I asked.

“And how many tours in-country?” I asked.

Four tours may seem like a lot, but there are soldiers who have served ten or more tours in Iraq and Afghanistan–men like Brigadier General Donald C. Buldoc (Ret).

I had no reason to question John’s length or type of military service. However, there are people who lie about military service. The reasons are varied. Some have served, but embellish how and where they served. Others have never served and lie about it in order to get discounts at restaurants or to get better seats on planes. Such egregious behavior is referred to as “stolen valor.”

I could tell by John’s countenance that he likely didn’t want to go into detail about his time in Afghanistan. So, I didn’t pry.

“So, because of what you saw, what you experienced in Afghanistan, you no longer believe in God?” I asked.

“I didn’t serve in the military,” I offered. “But I did serve for 20 years as a deputy sheriff in Los Angeles County. I’m not trying to compare my experiences to yours. I know they’re different. I’m just saying that I know what it’s like to see men do terrible things to they’re fellow man, on a daily basis.”

What I didn’t know about John’s military service is if what troubled him was what he saw in others or what he saw in himself. Did his present denial of the existence of God stem from acts he saw others commit or did it stem from the guilt over things he had done? I wanted to be careful not to make verbal assumptions about John’s military service that would either make him feel unnecessarily guilty for things he did not do or let him off the hook for sins actually committed.

Regardless of where John’s denial of God’s existence came, it was invalid. John knew God existed the same way I do.

“For the wrath of God is revealed from heaven against all ungodliness and unrighteousness of men, who by their unrighteousness suppress the truth. For what can be known about God is plain to them, because God has shown it to them. For his invisible attributes, namely, his eternal power and divine nature, have been clearly perceived, ever since the creation of the world, in the things that have been made. So they are without excuse. For although they knew God, they did not honor him as God or give thanks to him, but they became futile in their thinking, and their foolish hearts were darkened. Claiming to be wise, they became fools, and exchanged the glory of the immortal God for images resembling mortal man and birds and animals and creeping things” (Romans 1:18-23).

“John, if someone broke into your home and stole all of your stuff, would that person cease to exist because he did something you didn’t like?” I asked.

“That’s right,” I affirmed. If I did something bad to you, I would cease to exist. You could say you don’t believe I exist, but that would never change reality, right?” I asked.

“I’m not questioning the reality of what you saw during your service in Afghanistan, or how terrible it was. But that you had troubling experiences in Afghanistan doesn’t change the reality that God exists. God doesn’t go away simply because you don’t like what He did or allowed, or because of what someone else might have done in His name,” I explained.

“Something else to consider,” I said. “Part of the problem may be that you might be thinking bad things shouldn’t happen to good people and, if God is real, He wouldn’t let that happen.”

“The problem with that, John, is that none of us are good. Look, if I was in a room with John, Osama, and Adolf and I’m told I have to pick a friend, I’m going to pick you. But God doesn’t grade on a curve. He’s not going to compare you to me, or me to you. He’s going to judge us according to the law He’s written on our hearts.

“We know it’s wrong to lie, steal, take God’s name in vain, and murder because God has given us a conscience. Again, we know right from wrong because God has written His law on our hearts. We’re all guilty of breaking God’s law. So, when we stand before Him one day we will be without excuse.

“John, you know God exists. One day you’re going to stand before Him to give an account of your life,” I explained.

I took John to the courtroom.

“John, that courtroom is a picture of what God actually did,” I explained.

2,000 years ago, God the Father sent His Son to earth in the person of Jesus Christ—truly God and truly man, yet without sin. He lived a perfect life, as God-in-the-flesh, from cradle to grave—a life that neither you nor I can possibly live. Jesus lived a life of perfection. He perfectly obeyed the Law of His Father, in thought, word, and deed.

“Yet even though He knew no sin, at a time appointed before the foundation of the world, Jesus Christ, God the Son, voluntarily submitted Himself to a horrific, bloody death on a Roman cross. He literally took upon Himself the punishment those who would believe in Him rightly deserve for their sins against God. He bled; He suffered; He died; He was buried. And three days later he forever defeated sin and death when He rose from the grave. He is alive today, and He will return at a time of the Father’s choosing.

“What God requires of you and me, John is that by faith we repent and receive Jesus Christ as our Lord and Savior.

“If God does His miraculous work in you, if He literally causes you to be born again–born from above, He will forgive your sins against Him. You will be reconciled to the God you have spent your life offending by your sin. And you will have the assurance of eternal life–not on the basis of anything you have done to earn it or deserve it, but rather on the basis of God’s love that would allow His one and only Son to die on behalf of sinners like us.

“Does that make sense?” I asked.

“John, again, I’m not assuming anything about your service in Afghanistan. But if there is anything that happened there, anything you may have done that you shouldn’t have done, there is forgiveness to be found in Jesus Christ. He is the only place you will find it,” I offered.

“Thanks,” John replied. “So, where’s your church?”

I gave John directions to our church. “You will find all of the information on the card I gave you.”

We shook hands. Social distancing was far from my mind at that moment.

As John walked away, I praised and thanked God for the conversation John and I just had. I rejoiced in that while the conversation began with John denying the existence of God, it ended with John hearing and understanding the gospel and asking for information about my church.

I prayed for his salvation.

Join me in that.