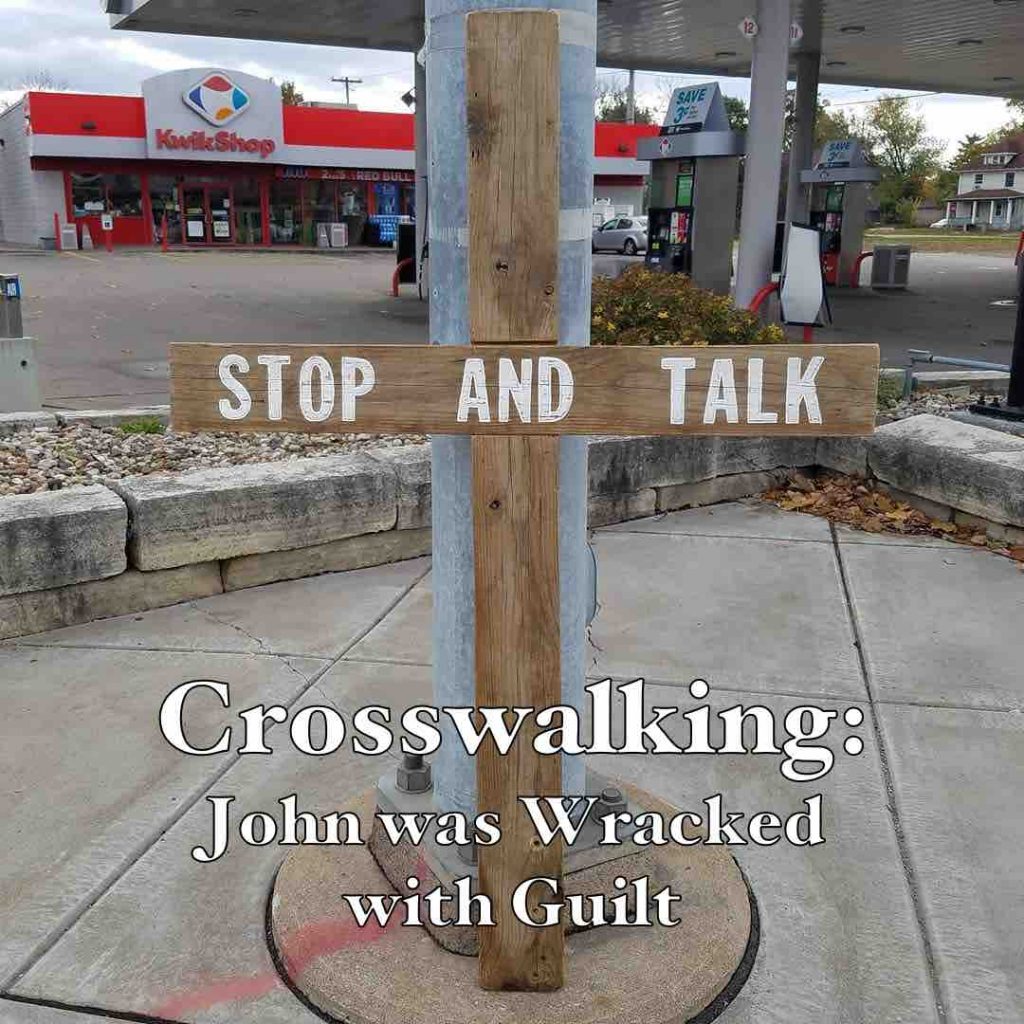 After placing gospel tracts on several hundred cars, we headed to the corner of Harrison and Locust for a time of sign evangelism and crosswalking. The decision was yet another of God’s divine providence.

I drove to Walmart on the west end of town where I would meet Donnie and Matt. The plan: tract as many cars as we could with the Coronavirus gospel tract I wrote for One Million Tracts. The three of us tracted cars at Walmart and two nearby Hy-Vee grocery stores. We tracted more than 800 cars.

There were some interesting reactions among the few people I encountered. Some simply accepted the tract with a smile and “thank you.” Others, however…

As I was driving out of Walmart’s parking lot, a man in a truck pulled alongside me. He rolled down his window, indicating he wanted to talk to me. So, I rolled down mine.

“It’s good news. It’s a gospel tract,” I replied, holding up one in my hand.

“I’m not touching anything!” The man yelled as he drove away.

I approached a man in one of the Hy-Vee parking lots.

“Here’s some good news for you, sir,” I offered.

“Thanks,” the man said. He reached for the tract and gripped it between his knuckles, making sure not to touch it with the ends of his fingers.

Most fear is unreasonable and stems from a love of self and no fear of God in one’s eyes.

Crosswalking at Harrison and Locust

Donnie, Matt, and I finished tracting our third parking lot full of cars. I suggested to my brothers that we head to Harrison and Locust for a time of sign evangelism and crosswalking. We headed that way and within a matter of minutes, we were standing on the corner and waving at cars.

Matt and I stood on the southwest corner of the intersection, closest to the Kwik Shop gas station and convenience store. The parking lot gave people a place to stop if they wanted to talk to us. Donnie stood across the street, on the southeast corner.

Although traffic at the busy intersection seemed considerably less than usual for the time of day, there were still plenty of cars on the road. Hundreds of people saw the cross and our gospel signs during the couple of hours we were there.

As I watched the cars approaching the intersection on eastbound Locust, I saw a black car approach the intersection. Eastbound Locust has two lanes (#1 and #2, from left to right). The car, with the driver being the only occupant, was in the #1 lane. Other cars were behind him in both lanes.

The driver and I made eye contact. A split-second later, the driver made a sharp, right turn, across the #2 lane, onto southbound Harrison. God’s gracious providence determined he did not collide with a car in the #2 lane.

Matt and I looked at each other and said, almost in unison, “I think he’s going to stop to talk.”

And that’s what the driver did.

I turned around and watched the man pull into the gas station parking lot and stop close to us. A small retaining wall separated the parking lot from the public sidewalk on which we stood.

We could see the driver motioning for me to walk to his car. I waved back, letting the driver know I saw him. With my cross in hand, I walked toward the retaining wall.

“Be careful,” Matt cautioned me.

As I climbed over the retaining wall, the driver stepped out of the car. He was a large man, well over six feet tall. His clothes, hands, and face were soiled. He looked like a man who had just finished a hard day’s work.

We met at the hood of his car. We were several feet apart when the man raised his hand to stop my progress.

“I’m not getting any closer,” he said.

Like so many people gripped with fear in our present world, the man was practicing “social distancing.” I honored his request.

“I Feel So Guilty”

I was close enough to see that the man’s eyes glistened with tears. He looked grieved. I would soon find out why.

“Give me a pamphlet,” the man demanded. He was agitated.

I reached into my coat pocket, removed one of my church’s gospel tracts, and handed it to him. “Here ya go,” I offered.

The man took the tract and held it tightly in his hand.

“My name is Tony,” I introduced myself.

“I’m so very sorry to hear that John.” My heart immediately went out to him. “Had she been ill? Was it sudden?”

John told me that his wife became ill with a previously undiagnosed intestinal issue. Four days later, she would be gone.

“I feel so guilty,” John explained. “Maybe if I made her go to the doctor sooner. I’m sad. I miss her so much. I’m angry.”

“John, as far as feeling guilty…”

“I wasn’t good to her,” John interrupted.

“Look; I don’t know to what extent you should or you shouldn’t feel guilty,” I explained. “What I do know is this: we’ve all sinned and fallen short of God’s glory. But there is forgiveness in Jesus Christ.”

“I know all that. I’m Catholic,” John asserted. “I just need some counsel. I don’t have faith.”

“I was raised Roman Catholic,” I said. “That won’t help you. You need to come to faith in Jesus Christ–to repent and receive Him as Lord and Savior. He will forgive your sin. You will only find peace in Jesus Christ.”

John looked at the gospel tract I gave him. “I don’t even know what kind of church you’re from,” he said.

“We’re from a Baptist church, here, in town,” I replied.

“John, again, I am very sorry for your loss, I said.

John was upset, grieving, and understandably preoccupied with his wife’s recent death. It was clear to me that I wasn’t going to be able to provide John with much beyond sympathy and a listening ear. He heard Christ proclaimed and he had a gospel tract in his hand.

“John, my pastors’ phone numbers are on the tract. I’m sure any one of them would be glad to buy you a cup of coffee and talk to you,” I offered.

“I don’t want anyone to buy me anything,” John objected.

“I just meant that they would sit down and talk to you over a cup of coffee if you like,” I explained.

John started for his car door but stopped short. There were still tears in his eyes.

“I don’t know how many people you help being out here but just know that you’ve helped me today. Thank you for being out here,” John said.

John climbed back into his car.

“John, we’re going to be praying for you,” I called.

“Don’t pray for me. Pray for my wife. I believe she is in a better place, but just in case, pray for her,” John said.

Some of John’s unbiblical and superstitious Roman Catholic roots (praying for the dead) were exposed. But this wasn’t the time to challenge and correct his theology.

John waved goodbye as he backed his car toward the parking lot exit.

I hope John will contact one of my pastors.

As I relayed to Matt the conversation I had with John, I mentioned how God’s providence was wonderfully displayed. I reminded Matt that our usual spot for crosswalking and sign evangelism is at another intersection about a half-mile away. That we came to the intersection of Harrison and Locust today was not based on any wisdom on my part.

It was entirely the providence of God that had us at Harrison and Locust today. And we could be certain of at least one thing. The Lord wanted John to stop and talk.

I met Bentley and his grandfather Steve while fishing at Pride Lake, in Scott County Park. This is the story of God's gracious providence. A three-Fold Purpose For me, there is a three-fold purpose … END_OF_DOCUMENT_TOKEN_TO_BE_REPLACED