“What do you mean by ‘stop and talk?'” William asked.

“About how your sins can be forgiven and how you can be reconciled to the God you’ve always known,” I replied.

“Oh, okay. I’m being baptized this weekend at the big Lutheran Church by Vander Veer Park,” William explained. “It seems like the church believes more in God than in Jesus; if that makes sense.”

The church to which William referred is a liberal ELCA church.

“Is it okay to get baptized in any church?” William asked. “I mean you don’t have to be a Christian, do you?”

“Baptism is an outward expression of what Jesus Christ has actually done in your heart. It’s not something necessary for salvation. Baptism is a fruit of salvation.” I explained.

“So, William what do you think is going to happen to you when you die?” I asked, changing gears.

“Hopefully I will be raptured in the tribulation, you know, and hopefully be with the Lord,” he answered.

“When you die, do you go somewhere?” William asked. “I don’t understand the whole death thing.”

“Good question. Let’s talk about a couple of things first.” I said.

I asked William why God should allow him to heaven. He said, “I loved His Son and His sacrifice. I know I’ve sinned, but I hope I’ll be forgiven for that. There’s probably some more.”

I asked William why God should forgive him. He said because he believes himself to be a very generous person. I truly believe in Jesus. I believe the Bible; I know it’s been switched around in a few places; that’s what I’ve heard.”

William turned his head toward the sound of a car horn.

“That’s my ride,” he said with a chuckle.

I knew I didn’t have much time with William.

“Do you think you have to be a good person to go to heaven?” I asked.

“No, not necessarily. I believe, though, deep down inside you have to be kind-hearted.” William explained.

So, William did believe he had to be a good person.

“And how would you know if you’re kind enough?” I asked.

No Hope in Kindness 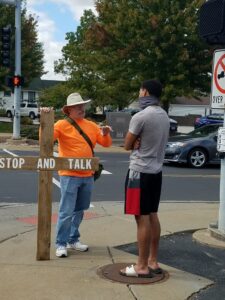 “Here’s what Jesus said. You’ll find it in the Sermon on the Mount, in Matthew 5. Jesus said, ‘You are to be perfect as your heavenly Father is perfect.” I explained. “That’s God’s standard for goodness: moral perfection. In other words, if we want to get to heaven based at all on anything we do, then what we do has to be perfect.

“So, if getting to heaven is believing in Jesus and being a kind person, then your kindness would have to be perfect,” I said.

“That makes sense,” he said.

“Have you ever been unkind?” I asked.

“Um, yeah. Everyone has been unkind,” William answered. He wasn’t going down alone.

“Then if God’s standard is perfection, you’ve already fallen short,” I explained. “There’s no hope for you.”

“Oh, wow!” he exclaimed with a start.

Having dismantled his reliance on his own perceived kind-heartedness, I began to take William through the law and the gospel. As I did, his ride, now parked across the street, became more persistent with the car horn. I was not able to finish before William said he had to leave.

“Here; take this. Read it. It will continue the conversation we’ve started.” I handed William his second gospel tract of the day, forgetting that Roy had already given him one.

William ran to the nearby pizza place. Moments later he came out with a large pizza box and a bag. I watched as he, like the Frogger video game of old, darted across four lanes of busy, midday traffic to get to his impatiently waiting friend’s car.

“I hope he doesn’t die crossing the street,” I said to Roy, thinking of the present state of William’s soul.

The Importance of Gospel Tracts

Pray for William. If the Lord doesn’t intervene in the next couple of days by giving him the gifts of repentance and faith in Jesus Christ, if God doesn’t cause him to be born again to a living hope, then he is going to be baptized as an unconverted young man. Actually, he’s going to take a bath. He’s going to get wet. And the church will count it because that’s what so many churches do–and not just the apostate ones.

My encounter with William, in addition to being a God-ordained gospel opportunity, serves as yet another testimony to the importance of gospel tracts. I may not have been able to say everything I wanted to say to William, but the gospel tract (if he reads it) will.

I met Bentley and his grandfather Steve while fishing at Pride Lake, in Scott County Park. This is the story of God's gracious providence. A three-Fold Purpose For me, there is a three-fold purpose … END_OF_DOCUMENT_TOKEN_TO_BE_REPLACED