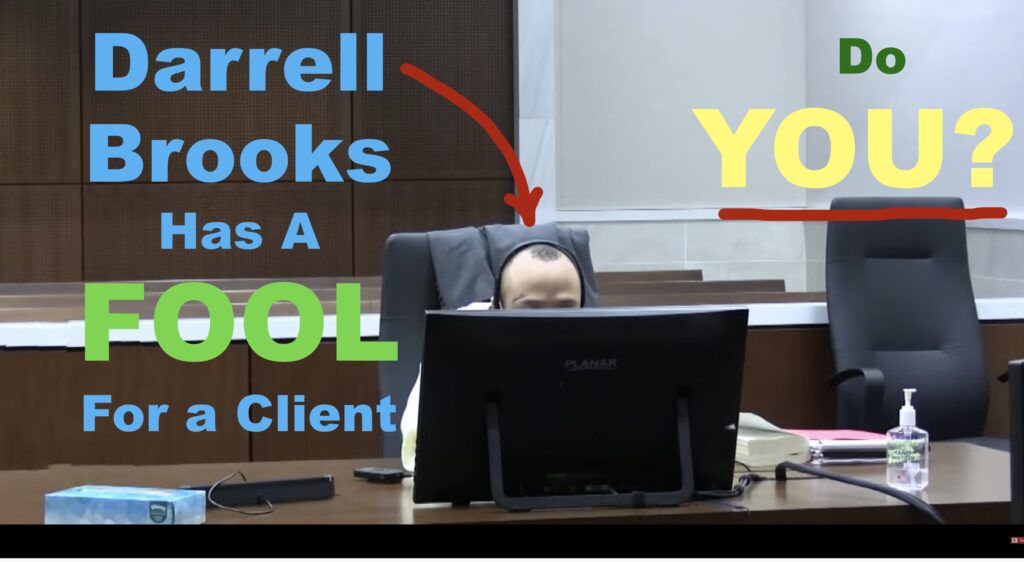 Darrell Brooks has a fool for a client. Do you? Read on to learn why I make the assertion and ask you, the reader, the question.

Prior to becoming the 16th President of the United States, Abraham Lincoln was a lawyer. We have no shortage of memorable quotes from the man most consider to be one of, if not the greatest presidents in American history. I used one of his quotes as a springboard in a gospel tract I wrote many years ago.

On Sunday, November 21, 2021, at approximately 4:39 PM, the City of Waukesha, WI, was in the midst of its annual Christmas Parade. Darrell Brooks (39 at the time), a career criminal with a misdemeanor and felony record spanning two decades, allegedly drove his mother’s red SUV through the parade route striking and killing six people and injuring more than 60. The people who died as a result of Brooks’ alleged rampage include:

Darrell Brooks was arrested later in the evening of Sunday, November 21, 2021. He was subsequently arraigned and formally charged. In total, Brooks is alleged to have committed and is charged with 76 crimes, which range in severity from misdemeanor domestic battery to intentional homicide. On the six homicide charges alone, if convicted, Brooks is facing six consecutive life sentences.

Wisconsin is one of 12 states that does not allow for the death penalty. In 1851, John McCaffary was convicted of murdering his wife and sentenced to death by hanging. Thousands of people came out to watch the public execution. What should have been a quick death, turned into an 18-minute, horrific spectacle. The following year, 1852, the Wisconsin legislature abolished the death penalty. If found guilty, Darrell Brooks will serve as a good argument for reinstituting the death penalty in Wisconsin.

Some of the Players

I’ve watched several hours of courtroom drama, comedy, and tragedy during the trial of the State of Wisconsin vs Darrell E. Brooks (DA Case No.: 2021WK007545). Having spent hundreds of hours in courtrooms as an arresting officer, an expert witness in cases not my own, and the lead investigator for the people, I have been fascinated by what has transpired.

I have been very impressed by Waukesha County Circuit Court Judge Jennifer Dorow. In what I suspect is likely the highest-profile trial of her 11-year judicial career, a trial that includes the most difficult defendant imaginable, Judge Dorow has conducted herself with professionalism, fairness, and an extraordinary level of patience.

The prosecutors, a team of three, have likewise conducted themselves professionally and have exercised a great deal of patience with Brooks. On multiple occasions during the trial, the prosecutors have expressed their concern for Brooks’ lack of legal and procedural knowledge by making advisements and warnings to Brooks, via petitions to the court, about the pitfalls of engaging in certain lines of questioning that could open the door to damaging cross-examination. The prosecutors were under no legal or ethical obligation to extend such courtesies.

I’ve watched the testimonies of several witnesses, both law enforcement and civilian. They, too, had to exercise great patience. Through hours of questioning and, for some, through tears, they answered mundane and difficult questions. Many, to one extent or another, were forced by subpoena and conscience to relive a nightmare.

And then there is Darrell Brooks.

Darrell Brooks Has a Fool for a Client

Over the last few weeks, I’ve seen what I’ve come to believe is the epitome of this Lincolnian proverb illustrated in what might be one of the most memorable court trials in recent times. Again, in the memorable, but not inimitable (God addressed this long ago) words of Abraham Lincoln, “He who represents himself has a fool for a client.” And why do I make this observation about Brooks? He has opted to defend himself–to serve as his own defense attorney.

To be sure, Darrell Brooks is not a stupid man. While he’s mentally competent to stand trial (Brooks dropped his insanity plea as well as his attorneys representing him in September of last year), his legal prowess is equivalent to someone calling themselves a “lawyer” having earned his degree off the back of a matchbook cover. That doesn’t make him stupid. His problem isn’t one of intelligence, but rather hubris, narcissism, and the common audacity of a lost man who believes himself to be the final authority in and the center of the universe. Nowhere is this found more evident than in the primary aspect of Brooks’ ridiculous defense.

Brooks is making the claim that he is a “sovereign citizen.”

What Is a “Sovereign Citizen?”

For brevity’s sake, here is a definition of a “sovereign citizen” from Police Magazine:

“Sovereign citizen” is a broad, general term that is often applied to any individual person or group that does not believe that the laws of the United States or the state laws apply to them. In other words, they are beyond the jurisdiction of law enforcement authorities. The term “sovereign citizen” should be viewed as an umbrella under which you will find thousands of loosely organized groups or individuals that share one basic ideological principle but approach it through different paths.

Repeatedly throughout the trial, with the demeanor and immaturity of a spoiled two-year-old, Brooks has challenged the court’s authority. During one of many tense moments, he even tried to intimidate the judge by staring her down. Brooks constantly demands the judge submit to him and his will, while arrogantly asserting a legal acumen he doesn’t have. He sees himself as presiding over the trial. He does not abide the judge telling him what to do, going so far as to often snap at the judge with the interrogative, “Are you asking me or are you telling me?” Many times he has yelled at the judge, telling her that no one tells him what to do.

Other than being an expert at being on the wrong side of the law, he has no legal expertise whatsoever. When it was his turn to present his case, Brooks foolishly called to the stand a woman whose four children he allegedly hit with his car. Fortunately, all of her children survived, but not without serious injuries. The result of the woman’s testimony: she became a powerful witness for the prosecution.

The Height of Hypocrisy

For me, there was a watershed moment today in the trial that exposed the height, depth, and breadth of Brooks’ hypocrisy. Throughout the trial, Brooks had to be removed by order of the judge to an adjacent courtroom because he refused to follow the most basic rules of procedure and decorum. Brooks would open a large, paperback Bible, presumably read it, and ignore the judge’s directions and questions. Brooks could hear and see the proceedings in the main courtroom and he was able to participate in the trial when he could behave long enough to do so.

Watch and listen to this exchange between Judge Dorow and Brooks.

Brooks, on trial for multiple murders and for injuring scores of people, has the audacity to disrespectfully correct the judge for the umpteenth time and say, “It’s not just a book; it’s the Book.”

Judge Dorow, who earned her law degree at a private, Christian university, quickly replied, “Can’t disagree with you there, sir.”

And then, in a moment dripping with head-tilting irony, Brooks puts the coup de grace to what minuscule shred of integrity he had left. Mumbling under his breath, making sure he is loud enough to hear, like an insolent child, Brooks says, “I mean, people actually live by it, though.”

Of course, Brooks was implying that he lives by the Book. With the blasphemy of Lucifer (Ezekiel 28:15-19), the arrogance of an ancient Chaldean king (Isaiah 14:14), and the rebellion of the Antichrist to come (Revelation 17:4-5), Brooks self-righteously claimed to obey the Bible.

But what about you? Do you have a fool for a client?

Do You Have a Fool for a Client?

At the beginning of this article, I mentioned a gospel tract I had written several years ago based on the well-known quote of lawyer-then-President Abraham Lincoln.

Here’s the text of the tract:

“Before becoming the United States’ most beloved president, Abraham Lincoln was a lawyer. He was known for his great pearls of wisdom, like the one on the front of this card. “He who represents himself has a fool for a client.” The same is true for anyone who thinks they will stand before God, serve as their own attorney, and argue their innocence and goodness. They will have a fool for a client. For all have sinned and fall short of the glory of God (Romans 3:23). Consider the evidence against you. If you have ever lied, stolen, taken God’s name in vain, or harbored hatred or lust in your heart; God sees you as one who has broken His Law and sinned against Him. Finding you guilty, He will do what any good judge would do. In your case, the punishment will be an eternity in Hell. Therefore do not be foolish, but understand what the will of the Lord is (Ephesians 5:17). God has provided only one way for you to receive a pardon from the Judge and the gift of eternal life in Heaven, with Him. God sent His Son to earth in the person of Jesus Christ, fully God and fully Man, who knew no sin. He voluntarily went to the cross where He shed His innocent blood and died, taking upon Himself the punishment you deserve for your crimes against God. Three days later, He defeated sin and death when He rose from the grave. What God commands you to do is repent (turn from your sin and turn to God) and, by faith alone, receive Jesus Christ as your Lord and Savior. Don’t be a foolish client.”

God has provided but one way for you to be reconciled to Him and He has provided only one Advocate, one Mediator, and one Attorney to represent you–His Son, the Lord Jesus Christ. “For there is one God, and one mediator also between God and men, the man Christ Jesus” (1 Timothy 2:5; see also Hebrews 8:6; 9:15; 12:24).

In God’s courtroom, the consequence for representing yourself and the inevitable guilty verdict is not a life sentence. It is a death sentence. So please, turn to Christ and live while God has given you time.

If Christian Nationalism succeeds (I don't believe it will succeed nor do I hope it will), then American Christians will be robbed of something many American evangelicals do everything they can to … END_OF_DOCUMENT_TOKEN_TO_BE_REPLACED