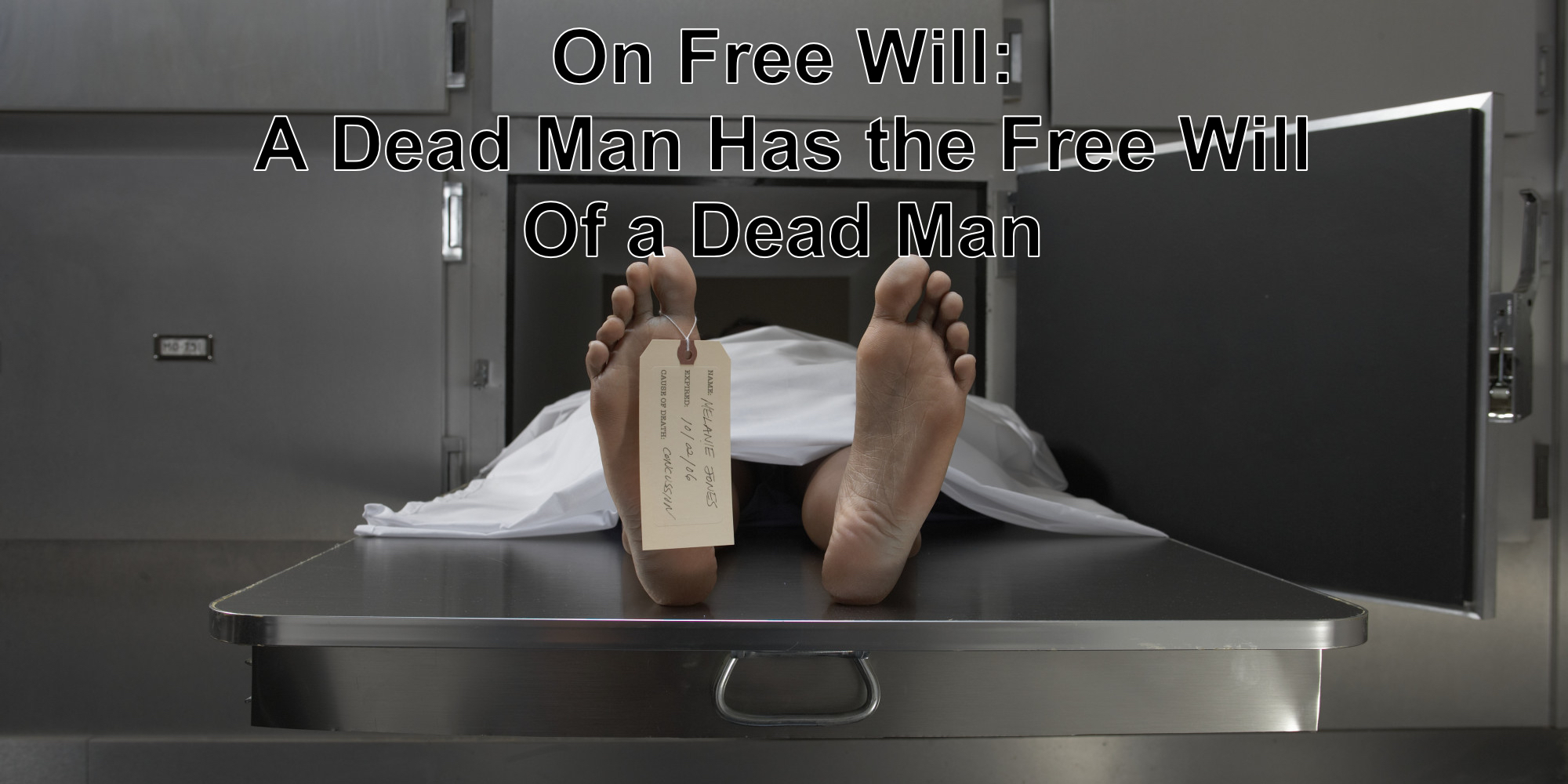 Just this last Saturday, during my church’s Men’s Bible Study, one of our elders led us through a wonderfully edifying study of Chapter 9 of the 1689 London Baptist Confession. The subject matter: free will. In this article, I will make some brief comments regarding this important chapter of the confession.. In doing so, I hope to show that a dead man had the free will of…..a dead man.

Chapter 9 of the confession reads as follows:

CHAPTER 9—OF FREE WILL

Paragraph 1. God has endued the will of man with that natural liberty and power of acting upon choice, that it is neither forced, nor by any necessity of nature determined to do good or evil, (Matthew 17:12; James 1:14; Deuteronomy 30:19).

Paragraph 2. Man, in his state of innocency, had freedom and power to will and to do that which was good and well-pleasing to God, (Ecclesiastes 7:29); but yet was unstable, so that he might fall from it, (Genesis 3:6).

Paragraph 3. Man, by his fall into a state of sin, has wholly lost all ability of will to any spiritual good accompanying salvation, (Romans 5:6; Romans 8:7); so as a natural man, being altogether averse from that good, and dead in sin, (Ephesians 2:1, 5); is not able by his own strength to convert himself, or to prepare himself there unto, (Titus 3:3-5; John 6:44).

Paragraph 4. When God converts a sinner, and translates him into the state of grace, He frees him from his natural bondage under sin, (Colossians 1:13; John 8:36); and by His grace alone enables him freely to will and to do that which is spiritually good, (Philippians 2:13); yet so as that by reason of his remaining corruptions, he does not perfectly, nor only will, that which is good, but does also will that which is evil, (Romans 7:15, 18-19, 21, 23).

Paragraph 5. This will of man is made perfectly and immutably free to good alone in the state of glory only, (Ephesians 4:13).

The Free Will of a Dead Man

There are people who, in an effort to fight for what they believe to be their “free will,” will go so far as to refer to the sovereign God of Scripture as a “cosmic puppeteer” and a “cosmic rapist.” Of course, they do not believe they are referring to the God of Scripture in this blasphemous manner. They would say they are referring to the God of Calvinism. So committed to and enamored by the distortion and falsification of the doctrine of free will are some people that they will blaspheme God by making caricatures of him out of moldy, weed-stuffed straw men. They do so while either failing to realize or refuse to accept the scriptural reality that it is the god of Arminianism is a god of their imagination–a god who is not sovereign, a god who is subservient to the will of man, a god who is nothing more than divine butler.

Yes, the God of the Bible (not the god of Arminianism) has created mankind with the ability to make moral-less choices (not immoral choices), free from coercion. A moral-less choice would be, as in the example provided by one of the men during our Men’s Bible Study, lifting a soda can. It was neither good nor evil to lift the can. In this illustration, we are not taking into account the motivation for lifting the can. To do so would take us into the realm of morality.

When Adam, the Federal Head of all of mankind, made the free choice to sin against God, he plunged all of humanity into sin and death. As a result of Adam’s transgression, every human being born since the Fall of Man has been born with a sin nature (Romans 5:12-14). He is corrupt and utterly incapable and unwilling to do anything that is good. More specifically, he is utterly incapable and unwilling to do anything to either commend himself to God (Luke 17:7-10), participate in his salvation (Psalm 65:4; 1 Peter 1:3), or work to keep his salvation (Romans 8:38-39; Ephesians 2:8-9)–all of which would be good acts.

“As it is written:

‘None is righteous, no, not one;
no one understands;
no one seeks for God.
All have turned aside; together they have become worthless;
no one does good,
not even one.’
‘Their throat is an open grave;
they use their tongues to deceive.’
‘The venom of asps is under their lips.’
‘Their mouth is full of curses and bitterness.’
‘Their feet are swift to shed blood;
in their paths are ruin and misery,
and the way of peace they have not known.’
‘There is no fear of God before their eyes'” (Romans 3:10-18).

The good news (and the gospel is only good news if this is true) is that God changes the heart of every person He saves. He takes his heart of stone and gives him a heart of flesh (Ezekiel 36:36). With that effectual Father-wrought, Christ-enabled, Holy Spirit-empowered, monergistic, salvific work of God performed in a person’s life, having become regenerate, the person will, by his new nature, love the things that God loves and hates the things that God hates–namely, his own sin. He now has the God-given capacity to love God and obey God.

The first and continuing fruits of repentance and faith will be followed by fruits such as faithfulness, love, and obedience to Christ’s commands. He will not perfectly love and obey, because his sanctification is not yet complete, his new nature being wrapped in old flesh (1 Peter 2:11). He will not experience full sanctification until his glorification is complete–that time commencing when he sees the Lord face to face, in glory (Colossians 3:4).

The desire and inclination of the Christian is to do that which brings God glory. The unregenerate person, because of his corrupt nature and will, cannot and will not desire to do anything that brings God glory. Yes, the unregenerate person can and will make many decisions on his own. While never operating outside the sovereign decrees of God, he will make decisions every day that are not forced upon him by his Creator. That is why he is and will forever be entirely responsible for everything he thinks, says, and does. The one thing the unregenerate man cannot do, however, is anything good (Psalm 53:2-4; Romans 14:23). The reason: the dead man has the free will of a dead man.

I met Bentley and his grandfather Steve while fishing at Pride Lake, in Scott County Park. This is the story of God's gracious providence. A three-Fold Purpose For me, there is a three-fold purpose … END_OF_DOCUMENT_TOKEN_TO_BE_REPLACED