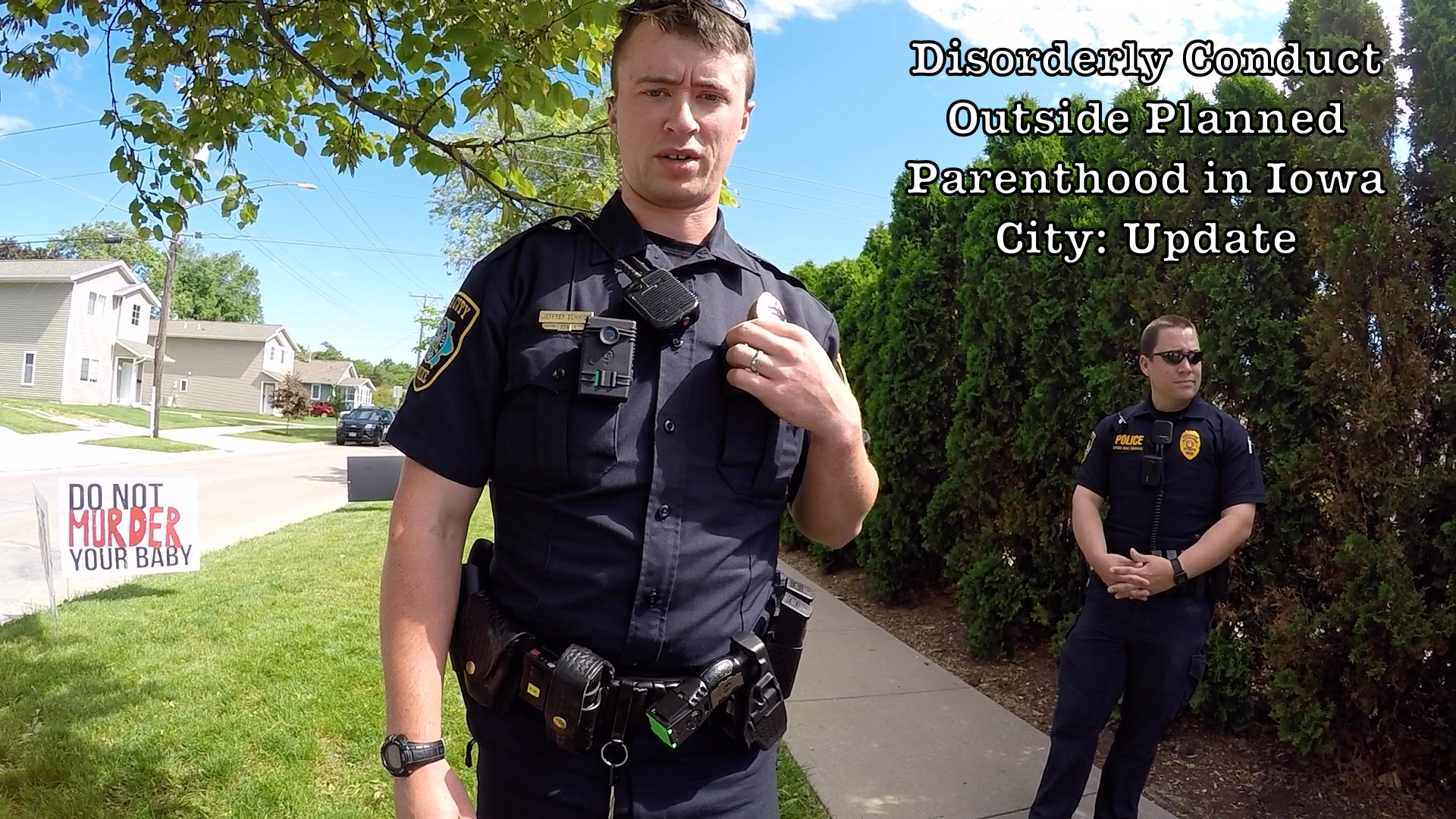 I’ve received many inquires from folks asking for an update regarding my “Disorderly Conduct” case stemming from an incident outside Planned Parenthood, in Iowa City. In this article I will provide a chronology of events and the latest news.

On Tuesday, May 30, 2017, Elder Nick Rolland and I went to Iowa City, IA, to minister outside the Planned Parenthood abortuary. We go there most Tuesday mornings. On Tuesdays, chemical/medical abortions are performed there.

As was and is our custom, Elder Nick and I pleaded with people entering the abortuary not to murder their unborn children. We also communicated the truth of God’s law and the gospel of Jesus Christ, to the extent we were able. An aspect of our ministry outside the abortuary is to stand atop a small step stool, read Scripture, and/or preach the law and the gospel to those inside the building.

Our hope each day we minister outside the abortuary is the same: that people will not murder their unborn children, and that they will repent and believe the gospel, receive forgiveness for their sins against God, and receive the free gift of eternal life that can and is only found in Jesus Christ.

Shortly before 10:00 AM, I climbed atop the step stool and began reading a select number of Scripture verses. As I was reading the verses aloud, on a public sidewalk, without the use of amplification, a Planned Parenthood security guard called the police.

Minutes later Officer Jeffrey Schmidt of the Iowa City Police Department, along with a second officer, arrived at the location. For the sake of time, I ask that you watch the following video, which includes my public reading of Scripture and my interaction with Officer Schmidt.

Both officers were courteous and professional throughout my contact with them.

After a very brief investigation, Officer Schmidt believed he had probable cause to arrest and release me at the location with a citation, on the following charge:

A person commits a simple misdemeanor when the person does any of the following:

2. Makes loud and raucous noise in the vicinity of any residence or public building which causes unreasonable distress to the occupants thereof.

After I signed the citation and received my copy, the officers left the location.

On May 31, 2017, I received a private email message from a man who now serves as my attorney in this case. His name is Jack Edwards, from Wyoming. Mr. Edwards is a Christian and has an ally relationship with Alliance Defending Freedom.

Mr. Edwards had seen the YouTube video, which chronicled my arrest. Mr. Edwards offered to serve as my attorney. I accepted his kind and generous offer.

On June 23, 2017, at the Johnson County Courthouse in Iowa City, I appeared for the first time in court. During my arraignment, I entered a plea of “Not Guilty,” at which time I requested a trial.

As a side note, the Johnson County Courthouse truly is a beautiful building.

On June 28, 2017, I returned to the Johnson County Courthouse and requested a “trial by jury.” In the State of Iowa, cases involving simple misdemeanors are most often set for trial before a judge. I decided that if I stood trial, I wanted the trial to be before a jury. My request was granted.

On July 31, 2017, Mr. Edwards and I appeared in court together, for the first time. The purpose of our appearances was for a Case Management Conference. The judge granted our request for a continuance to a date not yet determined.

What’s next? Well, we only have a general idea at the moment. Today, the prosecutor inquired if I would be willing to take a plea bargain. Through my attorney, I assured the prosecutor that under no uncertain terms will I accept any plea bargain agreement.

In the next several weeks, there will likely be one or more motion hearings. Once those motion hearings take place, an actual trial date will be set. Mr. Edwards speculates that my trial will take place in September or October, at the earliest.

Thank You and Support

I would like to thank all of you who have been praying for me during this interesting journey.

I would like to thank Elder Nick Rolland who was with me when I was arrested/cited. It was a great comfort and encouragement to have one of my elders with me, serving Christ together.

I would like to thank my other elders, Pastor Mike and Elder Tyler, for their ongoing support and counsel.

I would like to thank the Grace Fellowship Church family for their ongoing prayer and encouragement.

I would like to thank Jack Edwards for his generosity and advocacy.

I would like to thank Mahria and my daughters for their love and support. This is nothing new for them, but it’s never easy.

Most of all, I want to thank my Lord and Savior Jesus Christ for the gift of salvation and His unmatched trustworthiness. I thank Him for allowing me to suffer, even so little, for His name’s sake.

While Mr. Edwards is providing his legal counsel and defense pro bono, there are still costs involved in presenting a defense, in court: airfare for Mr. Edwards between Wyoming and Iowa, gas and parking, and other incidentals. If you would like to contribute to my defense, you can make donations here.

I met Bentley and his grandfather Steve while fishing at Pride Lake, in Scott County Park. This is the story of God's gracious providence. A three-Fold Purpose For me, there is a three-fold purpose … END_OF_DOCUMENT_TOKEN_TO_BE_REPLACED