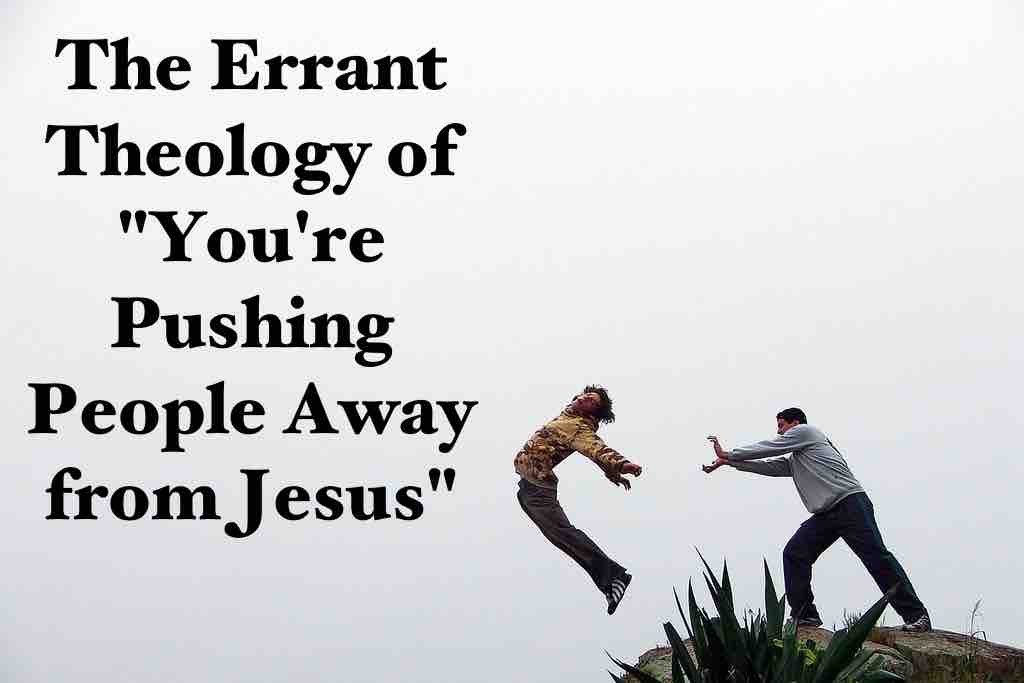 A common objection to most forms of public/street evangelism, especially open-air preaching–an objection made by professing Christians–is the notion of “pushing people away from Jesus.” The argument goes like this: “If you do [blank], then unbelievers will be pushed away from Jesus.” As I will show in this article, there is no biblical support for this claim.

A Request from a Dear Friend

This article is motivated by a note I received from a dear friend. She wrote:

“I [received a message from] a lady disagreeing with me about you pleading with the woman to not kill their babies. She thinks you are too loud and you push away people from the gospel that way. Of course, I don’t agree with her opinion but I want to give her a thorough biblical response. Do you have any suggestions on passages of scripture or material I can study for myself about open-air preaching and pleading with the lost as something beneficial and scriptural?

“Any suggestions or comments at all is helpful.”

My friend posted a video I shared chronicling my latest brush with the law. I was standing outside the Emma Goldman abortuary preaching the gospel, reading Scripture, and pleading with parents not to murder their unborn children.

People complained about the volume of my voice (I was not using amplification). This was evidenced by the arrival of Officer Harkrider, with the Iowa City Police Department. Subsequently, the officer would cite me for “disorderly conduct.”

The argument “If you [blank] you are going to push people away from Jesus” is fallacious. We’ll look at the theological reasons, shortly. But before we do that, let’s consider a few logical fallacies ingrained in the argument.

I will draw from an article by David Ferrer.

“A hasty generalization is a general statement without sufficient evidence to support it” (Ferrer).

To assert that preaching loudly (or street preaching at all) drives people away from Jesus is a general statement that assumes facts not entered into evidence.

Now, I have been heckled while preaching by people who have said, “You’re the reason I don’t believe in God! It’s people like you that drove me from the church!” Isn’t that evidence that people are driven away from faith in Jesus Christ by open-air preachers and preaching? No. The heckler’s objection still assumes facts not entered into evidence.

While not every appeal to authority is fallacious (I will soon make a legitimate appeal to authority), most are. “Often this fallacy refers to irrelevant authorities — like citing a foot doctor when trying to prove something about psychiatry; their expertise is in an irrelevant field. When citing authorities to make your case, you need to cite relevant authorities, but you also need to represent them correctly and make sure their authority is legitimate” (Ferrer).

The professing Christian who asserts that open-air preaching, or street evangelism in general, drives people away from Jesus most often appeals to an authority that is both irrelevant and illegitimate–his or her opinion. This illegitimate appeal to authority is sometimes couched in verbiage like: “I don’t believe this kind of evangelism is effective.” Or, “I wouldn’t do it this way. I think you ought to just ‘love on people,’ establish relationships with them and hear their stories.”

The blunt but true response to appeals to authority like this can be as simple as “so what.” So what if a person doesn’t believe open-air preaching is effective. So what if a Christian or most Christians wouldn’t do evangelism that way.  So what that a Christian thinks other Christians should “just love on people.” So what–not in a dismissive or derogatory sense, but as an exposure of the irrelevance of a claim.

Opinions, feelings, and preferences are not authoritative and they become fallacious when, as if they carried any real weight, they are imposed upon others.

Sometimes a fallacious appeal to authority is drawn from another fallacious source: groupthink.

While making a fallacious appeal to authority, sometimes a heckler will say, “No one here wants to hear you. They agree with me that you’re pushing people away.” It’s known as the “Bandwagon Fallacy.” I heard this objection on a college campus by a “campus ministry leader” who was apologizing to the crowd for my presence on campus.

Whether on a college campus, street corner, or social media platform, that other professing Christians (even many) agree with the assertion that open-air preaching and/or street evangelism drive people away from Jesus doesn’t make the assertion either true or authoritative. Finding people who agree with you doesn’t transform opinion into fact.

More can be said about the fallacious aspects of the notion that open-air preaching pushes people away from Jesus, but let’s put the proverbial nails in the coffin of this objection by showing the Bible simply does not support the claim.

You Can’t Push Who You Can’t Catch

Scripture makes it clear that no one, on their own initiative and desire to be reconciled to his or her Creator, seeks after God.

“As it is written: ‘None is righteous, no, not one; no one understands; no one seeks for God. All have turned aside; together they have become worthless; no one does good, not even one.’ ‘Their throat is an open grave; they use their tongues to deceive.’ ‘The venom of asps is under their lips.’ ‘Their mouth is full of curses and bitterness.’ ‘Their feet are swift to shed blood; in their paths are ruin and misery, and the way of peace they have not known.’ ‘There is no fear of God before their eyes'” (Romans 3:10-18).

Only those whom God the Father draws to Himself, through faith in Jesus Christ, can and will come to Him.

“No one can come to me unless the Father who sent me draws him. And I will raise him up on the last day” (John 6:44).

Those whom God appointed to eternal life before the foundation of the world will come to faith in Jesus Christ.

“And when the Gentiles heard this, they began rejoicing and glorifying the word of the Lord, and as many as were appointed to eternal life believed” (Acts 13:48).

“Blessed be the God and Father of our Lord Jesus Christ, who has blessed us in Christ with every spiritual blessing in the heavenly places, even as he chose us in him before the foundation of the world, that we should be holy and blameless before him. In love he predestined us for adoption to himself as sons through Jesus Christ, according to the purpose of his will” (Ephesians 1:3-5).

So, open-air preaching or any form of public evangelism, for that matter, will not push an unbeliever away from Jesus. The unbeliever isn’t seeking Jesus in the first place. He or she isn’t running toward Jesus. He or she is running away. I can’t push someone I can’t catch. On the other hand, if an unbeliever is numbered among God’s elect, there is nothing I or anyone else can do to prevent that unbeliever from coming to faith in Christ, at the time in which God has determined to save that person.

Not a License to Sin

That I know I cannot push anyone away from Jesus doesn’t give me a license to sin. Knowing I cannot thwart the providence of God in another person’s life doesn’t allow me to be cruel, mean, or in any way unkind to another person, no matter how they might treat me (Matthew 5:43-44). The biblical mandate that governs my interaction with people remains the Two Greatest Commandments.

“So have no fear of them, for nothing is covered that will not be revealed, or hidden that will not be known. What I tell you in the dark, say in the light, and what you hear whispered, proclaim on the housetops. And do not fear those who kill the body but cannot kill the soul. Rather fear him who can destroy both soul and body in hell. Are not two sparrows sold for a penny? And not one of them will fall to the ground apart from your Father. But even the hairs of your head are all numbered. Fear not, therefore; you are of more value than many sparrows. So everyone who acknowledges me before men, I also will acknowledge before my Father who is in heaven, but whoever denies me before men, I also will deny before my Father who is in heaven” (Matthew 10:26-33).

At the same time, there is no greater way I can show love for my neighbor–whether it’s the people who live next door, the students on the campus of the University of Iowa, the homeless man who happens by while I’m crosswalking at a street corner, or the men and women bent on murdering their unborn children at an abortuary–than to warn them about the wrath of God to come (Psalm 2:12; John 3:36) and point them to the cross of Christ, to Jesus, the only One who can save them from God’s own fury against sin and sinners (Romans 3:21-26; Ephesians 2:1-3).

Serving the God of Means

God is the God of means. God uses His people to communicate the life-saving, life-giving gospel. And this glorious gospel is a spoken message.

“For I am not ashamed of the gospel, for it is the power of God for salvation to everyone who believes, to the Jew first and also to the Greek” (Romans 1:16).

There are many different ways to communicate the gospel, but always with words.

It can be communicated in the answer to a question in a classroom or in a written assignment.

It can be communicated across a table at Starbucks or across the dining room table in your own home.

It can be communicated in the breakroom at work, or in the carpool.

It can be communicated quietly or loudly.

The God of means has given His people unique personalities and life contexts in order to spread the gospel around the world. So long as the authentic gospel is being communicated and so long as the truth is spoken in love (Ephesians 4:15), the Christian should praise God for any evangelistic effort, even if the form the evangelism takes isn’t how he would see himself doing it.

Biblical evangelism, in all its forms, when engaged with a heart of compassion (Matthew 9:36) and love (Mark 10:21), will never push anyone away from Jesus. It might be an aroma of death to those who are perishing (2 Corinthians 2:15-17), and people will hate Christians for daring to communicate the message (John 15:18-19), but to those whom God has determined to save it will be the means by which God shows His loving, saving power (1 Corinthians 1;18).

Today I was blessed with the opportunity of preaching the chapel message at Unity Christian School, in Fulton, IL. The invitation came through the school's choir director, Paul Hopkins. My … END_OF_DOCUMENT_TOKEN_TO_BE_REPLACED