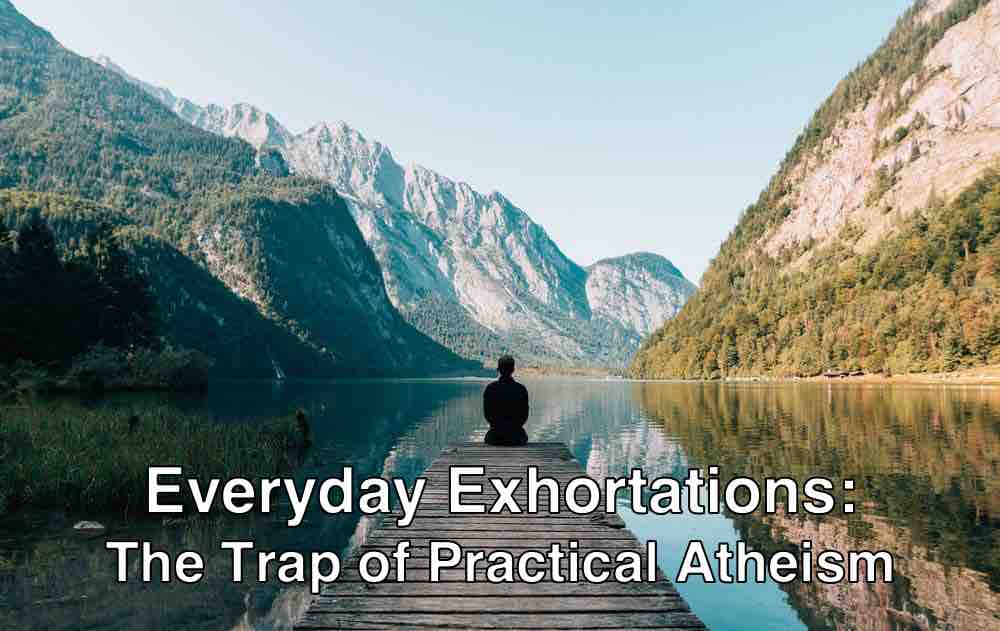 “The fool says in his heart, ‘There is no God.’ They are corrupt, doing abominable iniquity; there is none who does good” (Psalm 53:1).

Psalm 53:1 is true and, when rightly (lovingly and respectfully) applied, it’s an appropriate admonition to the professed atheist. Only a fool, only one who has deluded himself, would suggest that God doesn’t exist. In fact, it is the atheist that doesn’t exist. Neither the atheist, nor his cousins–skeptic and agnosti–exist outside the mind of the God-hater.

“For the wrath of God is revealed from heaven against all ungodliness and unrighteousness of men, who by their unrighteousness suppress the truth. For what can be known about God is plain to them, because God has shown it to them. For his invisible attributes, namely, his eternal power and divine nature, have been clearly perceived, ever since the creation of the world, in the things that have been made. So they are without excuse. For although they knew God, they did not honor him as God or give thanks to him, but they became futile in their thinking, and their foolish hearts were darkened. Claiming to be wise, they became fools, and exchanged the glory of the immortal God for images resembling mortal man and birds and animals and creeping things” (Romans 1:18-23).

Professing to be wise, the professed atheist has rendered himself a fool. What else can he do if he hopes to cling to his godless worldview? The only way he can cling to his atheism is if he clings to absurdity. Instead of worshiping the God he knows exists, he worships the man he sees in the mirror.

But it is not only the God-hater who dabbles in practical atheism. Christians can fall prey to this kind of sinful thinking and sinful living. There are times when the follower of Christ can be the fool described in Psalm 53:1.

When you do not live as though you really take God at His word and thus deny the authority of His commands, warnings, and promises, You are saying “there is no God.” You are, in effect, calling God a liar.

When you foolishly try to usurp God’s authority and deny His providence by anxiously seeking to take control of and/or manipulate circumstances in your life and the lives of others, you are saying “there is no God.” Like the atheist, you are foolishly believing that you can replace the enthroned God of the Universe with yourself.

When you question the validity and security of your salvation with only your fallible performance in view, with no view of the cross, you are saying “there is no God.” You are believing a false gospel that says you can work your way to heaven, and it is your ongoing work that will keep you there, all-the-while knowing you can never do enough to merit God’s love, mercy, and forgiveness. You are not believing God’s grace is sufficient for you.

When your desire is for worldly comfort instead of biblical contentment, you are saying “there is no God.” Your love is for the world and not for the Creator of the world.

Yes, when you think in these ways and do these things you are living more like a practical atheist than a follower of Jesus Christ. You don’t have to look for the angry, atheist in your workplace, classroom, or anywhere else in society. You need only look in the mirror.

Lord, please grant me repentance for such foolishness–for the times when my unbelief renders me a practical atheist. God, you ARE God and you are my Father. Your Son IS my Lord and Savior. Your Spirit DOES indwell me and He intercedes for me. May my life be a reflection of these realities as you continue to conform me to the image of Your Son, Jesus Christ. May my foolishness be replaced by faithfulness, for your glory and for my good.

Today I was blessed with the opportunity of preaching the chapel message at Unity Christian School, in Fulton, IL. The invitation came through the school's choir director, Paul Hopkins. My … END_OF_DOCUMENT_TOKEN_TO_BE_REPLACED