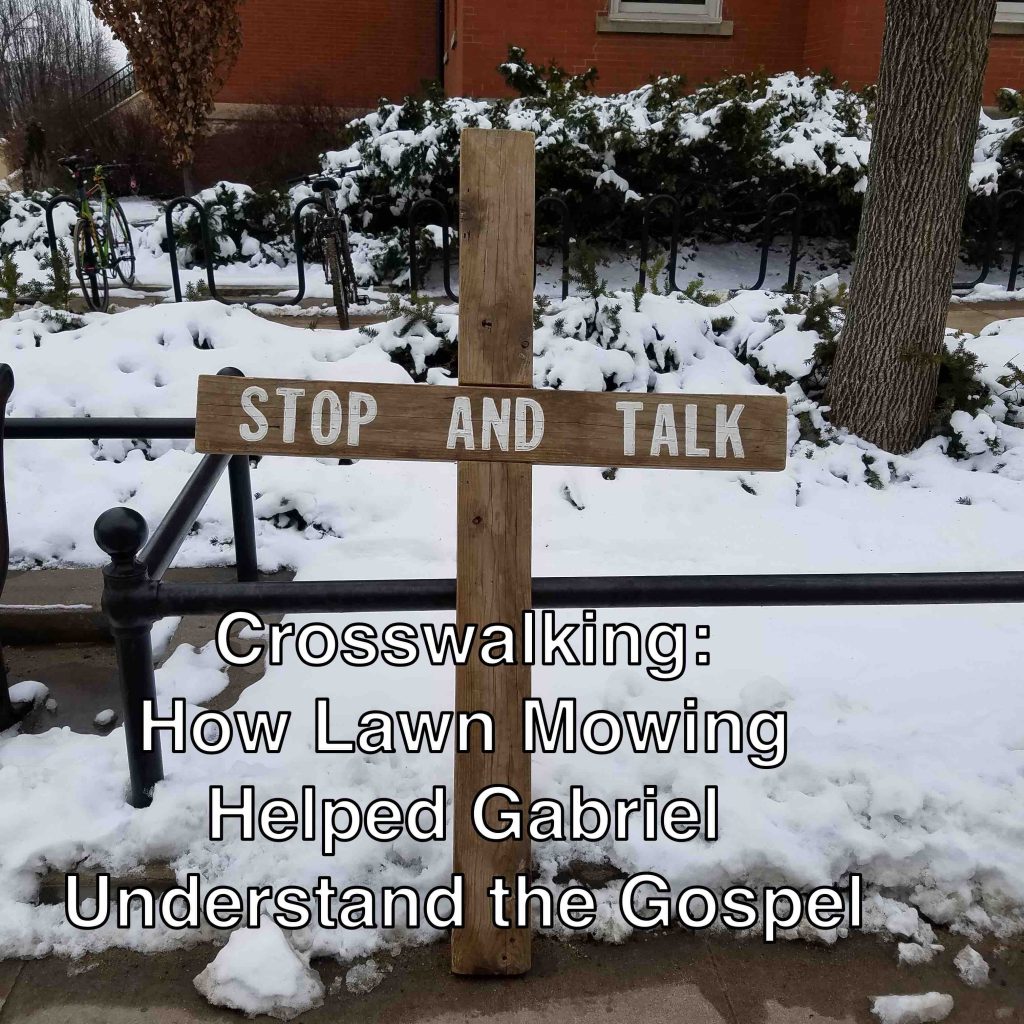 While on the University of Iowa campus, Gabriel approached me and said, “I’ll stop and talk.” The Lord would use the Lawn Mowing Analogy to impact Gabriel’s thinking.

New Semester at the University of Iowa

Evangelist Ray Comfort has often said, regarding evangelism, “I leave the house dragging my feet, but I come home clicking my heels.” Anyone regularly engaged in public or street evangelism can smile and nod his or her head to this maxim. I know I can. In fact, today was just such a day.

I’ve engaged in various forms of evangelism on the Iowa campus for two years. The campus is 54 miles west of my home in Davenport. The drive doesn’t bother me. I love engaging in gospel ministry among the Hawkeyes. Some of the gospel conversations I’ve had with UI students are among some of the best conversations, in some fifteen years of evangelistic street and campus ministry.

My youngest daughter, Amanda, is a third-year student at the University of Iowa. She commutes three days a week to the campus. I try to go with her once each week to save her some driving and to spend time with her. While she’s in class, I do the work of an evangelist.

Today marked the first day of the Spring Semester. I wanted go to the campus, but I wanted to think of a way to do it without leaving my house. You see; temperatures today were forecasted to be in the low-to-mid 20’s. Even a slight breeze would drop the wind chill into the teens.

Try as I might, there was just no way to minister on campus without driving to Iowa City and ministering on campus. Admittedly, I left the house with Amanda this morning dragging my heels a wee bit. I would be clicking my heels later in the day.

I dropped off Amanda outside the school library, the building in which she would attend her first class of the day is directly behind the library. With a kiss on the cheek and a wave goodbye, I drove to the opposite side of the campus. Once there, I parked in a parking structure, which was close to where Amanda’s last class of the day was held. I bundled up, donned my backpack, picked up my cross (literally), and walked back across campus to the Iowa Memorial Union (IMU). The IMU is the campus’s student center. All of the school’s student-led organizations, including Christian ministries, are housed in the building. Everything the students need–from food, to a store, to a quiet place to study and meet–is in the building.

I went to the IMU to meet with Alex, a Christian student and business major. Alex and I met last semester on a day when I was ministering on campus. Since then, we have tried to meet at least a couple times a month for fellowship and discipleship. I have grown to love this young man, like a son. It is a piece of tangible ministry fruit for which I am very grateful to the Lord.

Alex and I spent about an hour together before it was time for him to grab a bite to eat before class, and time for me to get to gospel work on campus. Alex walked with me to my regular evangelism spot, where we said our goodbyes.

As soon as I leaned my “Stop and Talk” cross against a snow-covered, metal bench, I was approached by a student. His name was Gabriel.

After introducing myself, I asked, “Gabriel, do you have any spiritual beliefs?”

“Are you Lutheran?” I asked.

“One thing I’ve learned after many years of talking to people about their religious beliefs is to never assume what a person believes, just because they say they belong to a particular religion or denomination.” I explained. “So what is it that you believe, Gabriel?” I asked.

“I’m still trying to work that out. I believe in heaven and hell; that’s for sure.” Gabriel said.

“I believe in heaven and hell, too,” I agreed.

Then I asked Gabriel, “What do you think is going to happen to you when you die?”

“I’m not sure. Purgatory, I guess.” Gabriel replied.

“Well, Gabriel, there is no mention whatsoever of Purgatory in the Bible. Purgatory is a several-century-old Roman Catholic doctrine that has no scriptural support. It was the doctrine of purgatory that was used to justify the church’s institution of indulgences. And indulgences were used in order to raise funds needed to build St. Peter’s Basillica.

“Gabriel, there is nothing you can do to earn God’s love or your salvation. And there’s no place called ‘Purgatory’ where you can work off the incalculable debt you owe God because of your sin against Him.

“Gabriel, are you familiar with what happened to the Holy of Holies when Jesus died on the cross?” I asked.

“When Jesus cried out, ‘My God, my God, why have you forsaken Me?’ And when He said, ‘It is finished,’ the veil separating the Holy of Holies from the rest of the Jewish Temple was torn in two. This veil was many feet high and several inches thick. When Jesus died on the cross, the veil to the Holy of Holies was torn in two, from top to bottom. This signified that because of Jesus’ death on the cross, there was no longer a separation between God and His people–those who, by faith, received His Son as their Lord and Savior.

“There was no longer any need for a high priest or a priestly system. Jesus is the great high priest and the only mediator between God and man.”

“I do find the mass to be beautiful and comforting.” Gabriel offered.

“Here’s the problem, Gabriel,” I explained. “The Roman Catholic Mass is based upon a misinterpretation of John 6, where we find Jesus telling people that to be his disciples they must eat of His flesh and drink of His blood. All but the disciples left him because they thought Jesus was speaking of literally eating his flesh and drinking his blood.

“That’s not what Jesus was saying. Jesus was using an analogy to describe eternal through faith in Him.

“In the Mass, Jesus is resacrificed for the forgiveness of sins. This contradicts what Jesus said on the cross. Jesus said, ‘It is finished.’ The Greek word is ‘tetelestai,” which literally means ‘paid in full.’ Everything that God the Father required of God the Son in order to provide all that was needed for people to receive forgiveness of sin and salvation through faith in Jesus Christ was accomplished by Jesus, on the cross. He died, was buried, and rose from the grave. Forty days later, he ascended to heaven where He presently sits at the right hand of power.

“Jesus does not come down from heaven when a priest calls Him down. He does not step away from His place of divine authority to enter a piece of bread or a glass of wine. His sacrifice, His work, His suffering was completed on the cross. He will never suffer again.”

Gabriel nodded his head in agreement. “That makes sense.” He said.

There’s an analogy I like to use, “The Lawn Mowing Analogy,” to explain the difference between works righteousness and works resulting from faith in Jesus Christ. It was a cold day, with snow on the ground when I talked to Gabriel, so I replaced lawn mowing with shoveling snow.

“Let’s say you were my neighbor. One day, you knock on my door and say, “Hi, Tony. I’m going to mow your lawn or shovel the snow from your driveway and sidewalks so that I can be your son.”

Gabriel tilted his head and smiled.

Noticing Gabriel’s expression, I said, “I would probably have the same look on my face. I would smile at you and say two things: ‘Thanks for getting me out of shoveling snow,’ and, ‘It’s nice that you want to be my son.’ But I would have to tell you, ‘Gabriel, shoveling snow is not going to make you my son.'”

“That would make most grown men cry.” I said. Gabriel, no one will stand before God and say, ‘Look at all I did for you; so, I’m ready to be your son.’ But those who truly know the Lord, those who have put their faith and trust in Jesus Christ alone for their salvation, will want to do that which pleases God–not to earn or keep their salvation, but because they are so grateful to God for the salvation He gave them as a gift, through faith in Jesus Christ.”

Gabriel’s eyes grew large. While pointing at me with both hands, Gabriel said, “That’s it! That’s what I’m looking for! Your analogy brought it all together for me.”

Gabriel Thinks He Has Time

“Gabriel, is there any sin in your life that you enjoy so much that you are willing to spend eternity in hell so you can enjoy that sin in this life?” I ask.

Gabriel thought about it for a moment.

“No; I don’t think so.” Gabriel replied. “I just want to live my life to the fullest, first.”

“You’re assuming God is going to allow you to take your next breath, let alone have life tomorrow.” I explained. “Look; I hope you have a long life, but you’re not promised tomorrow. That’s why the Bible says that now is the acceptable time; today is the day of salvation.

“Repent and believe the gospel I’ve shared with you, while God has given you time.”

Gabriel and I talked for a few more minutes. I gave him my card and invited him to contact me if he ever wanted to grab a cup of coffee and maybe read the Bible together. He appreciated the offer. We shook hands and Gabriel headed off to class.

Today I was blessed with the opportunity of preaching the chapel message at Unity Christian School, in Fulton, IL. The invitation came through the school's choir director, Paul Hopkins. My … END_OF_DOCUMENT_TOKEN_TO_BE_REPLACED