With temperatures near-zero, Donnie and I spent an hour outside Davenport P.D. A brief conversation with Lucas made enduring the bitter cold well-worth it.

We Would Get There Eventually 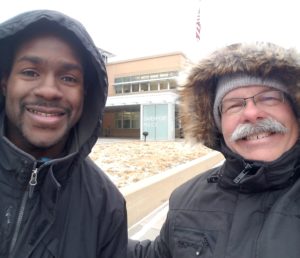 Donnie arrived at my house shortly before 9 AM. I knew my gospel signs were in the back of my vehicle, and my pockets were stuffed with church and Police Lives Matter gospel tracts. Donnie and I climbed into my vehicle and made the short drive to the Davenport Police Department.

Donnie prayed for us before I opened the back of my vehicle to pull out the Law Enforcement Lives Matter signs. They were inexplicably not in my vehicle. We drove back to my house. I found the signs in my garage. Now, with the signs actually in tow, we returned to the Davenport Police Department.

Donnie and I took our customary positions on the northwest corner of Harrison Street and 4th Street, in front of the police department. We waved at passing motorists. It wasn’t long before I received the first and only middle finger of the morning. Most of the motorists who acknowledged our presence did so with either a friendly wave, a thumbs-up, or a honk of the horn.

Donnie and I met a few pedestrians who came by our corner. Each person we met received a gospel tract.

Do All Lives Really Matter to Lucas?

I watched as a visibly cold man made his way toward me, from the opposite side of Harrison Street. He wore a Chicago Cubs hat, but nobody’s perfect (these days I’m a Dodgers fan; don’t hate me, bro). When he reached my corner, I offered him a gospel tract.

“God bless you sir. Have a good day.” I said. The man kept his hands in his jacket pockets and refused to accept the gospel tract.

“I agree.” I said. “What are your thoughts about abortion?” I asked. The man seemed surprised by the question.

“Well, I personally wouldn’t have an abortion, if I was a woman. But if a woman is raped, why should she be forced to have a baby that will remind her of that?” The man asked.

“Why would you murder the baby for the crime of the father?” I asked.

The man mumbled and stammered, but couldn’t answer the question.

“Lucas, consider this. Let’s say a woman is raped and she decides on her own, without any undue pressure, to have and keep the baby. After a couple months, she begins to recognize in the baby some of the physical characteristics of the rapist. This makes her very uncomfortable and she decides she can’t live with that kind of constant reminder. So, she takes her two-month-old baby into the bathroom and drowns the baby in the bathtub.

“That would be okay with you, right?” I asked.

“Why?” I asked. “The only difference between your scenario and mine is the age and location of the baby.”

“All lives do matter, Lucas, including law enforcement lives.” I said.

“Oh, I agree their lives matter. They do a dangerous job. Look, I spent 12 years in prison. If anyone has a reason to hate cops, I do. But I don’t.” Lucas said.

I tried a second time to hand Lucas the gospel tract. This time he accepted it, without hesitation.

We shook hands and gave each other a hug.

We said our goodbyes, and Lucas walked into the police station. A short time later he came back out, every bit as friendly toward us as when he said goodbye the first time. He said goodbye again and walked across Harrison Street to his car. Lucas pulled away from the curb and drove through the intersection, in our direction. He waved and laid on his horn.

Not only did we help Lucas come to a place of consistency in his “all lives matter” position, but we also left him with the understanding that his life mattered to us.

One conversation with Kim resulted in another conversation with another Kim. Confused? Allow me to explain. Kim at the Corner of Harrison and Locust A little more than a week ago, I met a man named … END_OF_DOCUMENT_TOKEN_TO_BE_REPLACED