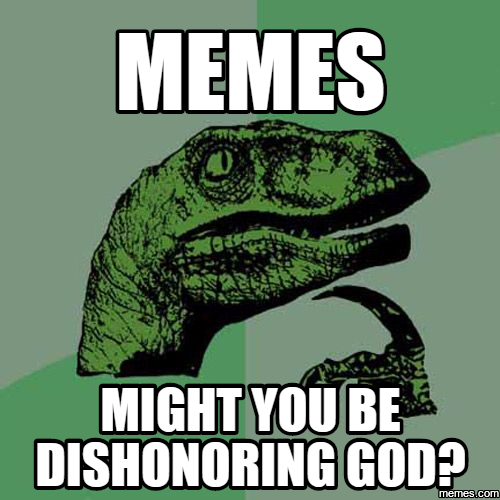 What are “memes?” For today’s social media-savvy world, it might seem like a silly question. However, there are still quite a few folks (probably in my generation and older) who have no idea what memes are. Dictionary.com defines the term “meme” this way:

“A cultural item in the form of an image, video, phrase, etc., that is spread via the Internet and often altered in a creative or humorous way.”

According to MemeGenerator.net, the practice and trend of using memes as means for humor, satire, and other forms of commentary began in 2007.

Memes are definitely woven in the tapestry of today’s culture. Radio sports broadcasters talk about snippets of videos they believe will result in memes. Political pundits and other talking heads will hear a statement from a politician and remark that what the politician said is “meme-worthy.” And Christians have gone all-in on the meme game, posting memes about theology, politics, and everything else the rest of the world is meming (or “meme-ing”).

I find myself laughing on a daily basis at some of the memes my Christian brethren publish on social media. Some of them are very creative and humorous. Others are equally thought-provoking. Still others are convicting. But there has been, as of late, what seems to me to be a growing trend–a disturbing trend–in how Christians are using memes.

“Finally, brothers, rejoice. Aim for restoration, comfort one another, agree with one another, live in peace; and the God of love and peace will be with you.”

While the apostle Paul wrote these words to exhort a church to love and good deeds, Christians thought it funny that the verse was used to encourage men to not make a mess while urinating.

“From that time Jesus began to show his disciples that he must go to Jerusalem and suffer many things from the elders and chief priests and scribes, and be killed, and on the third day be raised. And Peter took him aside and began to rebuke him, saying, ‘Far be it from you, Lord! This shall never happen to you.’ But he turned and said to Peter, ‘Get behind me, Satan! You are a hindrance to me. For you are not setting your mind on the things of God, but on the things of man.'”

Jesus told His disciples of the personal butchery he would experience at the hands of His own fallen creation. He told them of His glorious resurrection that would follow three days after His death. Peter sinfully pulls Jesus aside to chastise Him. The Lord sharply rebukes His disciple. And Christians thought it funny to use this dramatic, biblical scene to make light of people’s gluttonous desire for donuts.

Christian thought this was funny.

“Go therefore and make disciples of all nations, baptizing them in the name of the Father and of the Son and of the Holy Spirit” (Matthew 28:19).

“The grace of the Lord Jesus Christ and the love of God and the fellowship of the Holy Spirit be with you all” (2 Corinthians 13:4).

Mormons, Jehovah’s Witnesses, Muslims, Oneness Pentecostals all deny that God is triune–one God in three Persons. The Doctrine of the Trinity is an essential Christian doctrine. To deny the triune nature of God is to believe in a god that does not exist, a god that cannot save, an idol of the mind. To deny or mock the Doctrine of the Trinity is to deny and mock God. And Christians thought it funny to use the Godhead to represent three boys who could date their daughters.

A beautiful narrative in the Word of God, one pregnant with meaning and significance, is the story of God’s call to Abraham to sacrifice his son Isaac. In it we see the tangibility of Abraham’s faith, an articulation of the Abrahamic Covenant, and a foreshadow of the crucifixion of Jesus Christ. Here’s the story in its entirety (Genesis 22:1-19):

After these things God tested Abraham and said to him, “Abraham!” And he said, “Here I am.” He said, “Take your son, your only son Isaac, whom you love, and go to the land of Moriah, and offer him there as a burnt offering on one of the mountains of which I shall tell you.” So Abraham rose early in the morning, saddled his donkey, and took two of his young men with him, and his son Isaac. And he cut the wood for the burnt offering and arose and went to the place of which God had told him. On the third day Abraham lifted up his eyes and saw the place from afar. Then Abraham said to his young men, “Stay here with the donkey; I and the boy will go over there and worship and come again to you.” And Abraham took the wood of the burnt offering and laid it on Isaac his son. And he took in his hand the fire and the knife. So they went both of them together. And Isaac said to his father Abraham, “My father!” And he said, “Here I am, my son.” He said, “Behold, the fire and the wood, but where is the lamb for a burnt offering?” Abraham said, “God will provide for himself the lamb for a burnt offering, my son.” So they went both of them together.

When they came to the place of which God had told him, Abraham built the altar there and laid the wood in order and bound Isaac his son and laid him on the altar, on top of the wood. Then Abraham reached out his hand and took the knife to slaughter his son. But the angel of the Lord called to him from heaven and said, “Abraham, Abraham!” And he said, “Here I am.” He said, “Do not lay your hand on the boy or do anything to him, for now I know that you fear God, seeing you have not withheld your son, your only son, from me.” And Abraham lifted up his eyes and looked, and behold, behind him was a ram, caught in a thicket by his horns. And Abraham went and took the ram and offered it up as a burnt offering instead of his son. So Abraham called the name of that place, “The Lord will provide”; as it is said to this day, “On the mount of the Lord it shall be provided.”

And the angel of the Lord called to Abraham a second time from heaven and said, “By myself I have sworn, declares the Lord, because you have done this and have not withheld your son, your only son, I will surely bless you, and I will surely multiply your offspring as the stars of heaven and as the sand that is on the seashore. And your offspring shall possess the gate of his enemies, and in your offspring shall all the nations of the earth be blessed, because you have obeyed my voice.” So Abraham returned to his young men, and they arose and went together to Beersheba. And Abraham lived at Beersheba.

This is not merely a story. It is history. It is an integral part of the miraculous tapestry of salvation woven by God Himself. And some Christians think it appropriate to make light of the story, in order to get a chuckle out of other Christians.

And Christians thought this was funny.

The Bible documents the remarkable scene (The Passover) depicted in the above meme–a scene that serves as a foreshadow of the definite atonement of the Lord Jesus Christ.

From a devotional on the Ligonier Ministries webstite:

“Because the passion of Christ took place the week of Passover (Matt. 26:1–2), the early church quickly understood that Jesus fulfilled the symbolism in the Passover meal as ‘the Lamb of God, who takes away the sin of the world!’ (John 1:29). The marking of blood on the doorposts (Ex. 12:7–13) has a clear tie to the shedding of Jesus’ blood on the cross (Rev. 1:1–8), and it is therefore no surprise to see the Lord’s disciples link His death to the Passover throughout their writings. Without Christ, the Father looks upon the world He made and sees only a mass of corrupt sinners who are wholly deserving of His wrath. But since Jesus has died for His people, the Father now sees in the midst of fallen humanity men and women who have been marked with the blood of His Son by faith. His wrath can let these blood-bought saints alone in a passing over even greater than the one over the houses of Israel so long ago.”

Some Christians find it funny to use an illustration of the covering of a doorpost with blood, which represents the preparation Jews made for the Passover, in a meme that jokes about the upcoming presidential election.

Memes Have Their Place, But…..

Not all memes are bad. Memes do serve a purpose in this day and age of social media. Memes are a useful tool in communicating important messages, even biblical ones. But others are wholly inappropriate.

I’ve caught myself laughing at inappropriate memes in which biblical truths were used as the punchline to a joke. However, over time, God has convicted me that that which He has deemed holy (namely His person, His nature, His character, and His Word) should never be used or thought of carelessly, flippantly, or mockingly.

I am not suggesting that Christians who either think humorous, create, or share memes that make light of God and His Word intend to blaspheme God in doing so. I simply think Christians fail to think deeply enough about the memes they post and/or find funny. However, regardless of intent, Christians will be hard-pressed to find any biblical justification for using God and His Word as the punchline to jokes, in memes or in any other context. Such carelessness ought to be avoided at all costs by followers of Christ.

Before you post, share, or laugh at a meme that involves God and/or His Word, take time to consider whether or not you might be dishonoring God. Your need to make people chuckle, your need for a laugh, is meaningless when compared to the holiness of God and the integrity of His Word.

Ten years ago I had a conversation with a Boise State University student named Mohammed. The Lord is still using it. A Recent Email Recently, I received an email from a man named Ali--a Christian … END_OF_DOCUMENT_TOKEN_TO_BE_REPLACED