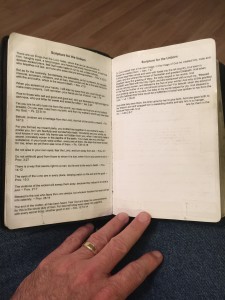 Recently, I have been asked by multiple people to provide the list of abortion-related Scripture verses I have in the front of my Bible–verses I use when open-air preaching or engaged in conversation outside abortuaries. You can see a recent example of me reading these Scriptures aloud outside the Planned Parenthood in Iowa City (IA), here.

Before reading a verse or passage in the open-air, I announce: “Listen to what the Word of the Lord says!” For me, this is like announcing to the enemy that I’m about to fire a round from a 15″ spiritual battleship gun into the building. The hope is that the Word of God will stop mouths, break hearts, and reduce to rubble the walls of pride people put around themselves.

In addition to the verses I have at the front of my Bible, I’ve added others in order to make the list more comprehensive.

These verses are in no particular order.

“There are six things that the Lord hates, seven that are an abomination to him: haughty eyes, a lying tongue, and hands that shed innocent blood, a heart that devises wicked plans, feet that make haste to run to evil, a false witness who breathes out lies, and one who sows discord among brothers” (Proverbs 6:16-19).

“But as for the cowardly, the faithless, the detestable, as for murderers, the sexually immoral, sorcerers, idolaters, and all liars, their portion will be in the lake that burns with fire and sulfur, which is the second death” (Revelation 21:8).

“When you spread out your hands, I will hide my eyes from you; even though you make many prayers, I will not listen; your hands are full of blood” (Isaiah 1:15).

“Come now, let us reason together, says the Lord: though your sins are like scarlet, they shall be as white as snow; though they are red like crimson, they shall become like wool” (Isaiah 1:18).

“Woe to those who call evil good and good evil, who put darkness for light and light for darkness, who put bitter for sweet and sweet for bitter” (Isaiah 5:20)!

“Yet you are he who took me from the womb; you made me trust you at my mother’s breasts. On you was I cast from my birth, and from my mother’s womb you have been my God” (Psalm 22:9-10).

“Behold, children are a heritage from the Lord, the fruit of the womb a reward” (Psalm 127:3).

“For you formed my inward parts; you knitted me together in my mother’s womb. I praise you, for I am fearfully and wonderfully made. Wonderful are your works; my soul knows it very well. My frame was not hidden from you, when I was being made in secret, intricately woven in the depths of the earth. Your eyes saw my unformed substance; in your book were written, every one of them, the days that were formed for me, when as yet there was none of them” (Psalm 139:13-16).

“The eyes of the Lord are in every place, keeping watch on the evil and the good” (Proverbs 15:3).

“The violence of the wicked will sweep them away, because they refuse to do what is just” (Proverbs 21:7).

“Blessed is the one who fears the Lord always, but whoever hardens his heart will fall into calamity” (Proverbs 28:14).

“The end of the matter; all has been heard. Fear God and keep his commandments, for this is the whole duty of man. For God will bring every deed into judgment, with every secret thing, whether good or evil” (Ecclesiastes 12:13-14).

“So God created man in his own image, in the image of God he created him; male and female he created them” (Genesis 1:27).

“Doing wrong is like a joke to a fool, but wisdom is pleasure to a man of understanding” (Proverbs 10:23).

“Serve the Lord with fear, and rejoice with trembling. Kiss the Son, lest he be angry, and you perish in the way, for his wrath is quickly kindled. Blessed are all who take refuge in him” (Psalm 2:11-12).

“The Father loves the Son and has given all things into his hand. 36 Whoever believes in the Son has eternal life; whoever does not obey the Son shall not see life, but the wrath of God remains on him” (John 3:35-36).

“For if we go on sinning deliberately after receiving the knowledge of the truth, there no longer remains a sacrifice for sins, but a fearful expectation of judgment, and a fury of fire that will consume the adversaries. Anyone who has set aside the law of Moses dies without mercy on the evidence of two or three witnesses. How much worse punishment, do you think, will be deserved by the one who has trampled underfoot the Son of God, and has profaned the blood of the covenant by which he was sanctified, and has outraged the Spirit of grace? For we know him who said, ‘Vengeance is mine; I will repay.’ And again, ‘The Lord will judge his people.’ It is a fearful thing to fall into the hands of the living God'” (Hebrews 10:26-31).

“Then I saw a great white throne and him who was seated on it. From his presence earth and sky fled away, and no place was found for them. And I saw the dead, great and small, standing before the throne, and books were opened. Then another book was opened, which is the book of life. And the dead were judged by what was written in the books, according to what they had done. And the sea gave up the dead who were in it, Death and Hades gave up the dead who were in them, and they were judged, each one of them, according to what they had done. Then Death and Hades were thrown into the lake of fire. This is the second death, the lake of fire. And if anyone’s name was not found written in the book of life, he was thrown into the lake of fire” (Revelation 20:11-15).

“In those days Mary arose and went with haste into the hill country, to a town in Judah, and she entered the house of Zechariah and greeted Elizabeth. And when Elizabeth heard the greeting of Mary, the baby leaped in her womb. And Elizabeth was filled with the Holy Spirit, and she exclaimed with a loud cry, ‘Blessed are you among women, and blessed is the fruit of your womb! And why is this granted to me that the mother of my Lord should come to me? For behold, when the sound of your greeting came to my ears, the baby in my womb leaped for joy. And blessed is she who believed that there would be a fulfillment of what was spoken to her from the Lord'” (Luke 1:39-45).

“And while they were there, the time came for her to give birth. And she gave birth to her firstborn son and wrapped him in swaddling cloths and laid him in a manger, because there was no place for them in the inn” (Luke 2:6-7).

Today I was blessed with the opportunity of preaching the chapel message at Unity Christian School, in Fulton, IL. The invitation came through the school's choir director, Paul Hopkins. My … END_OF_DOCUMENT_TOKEN_TO_BE_REPLACED