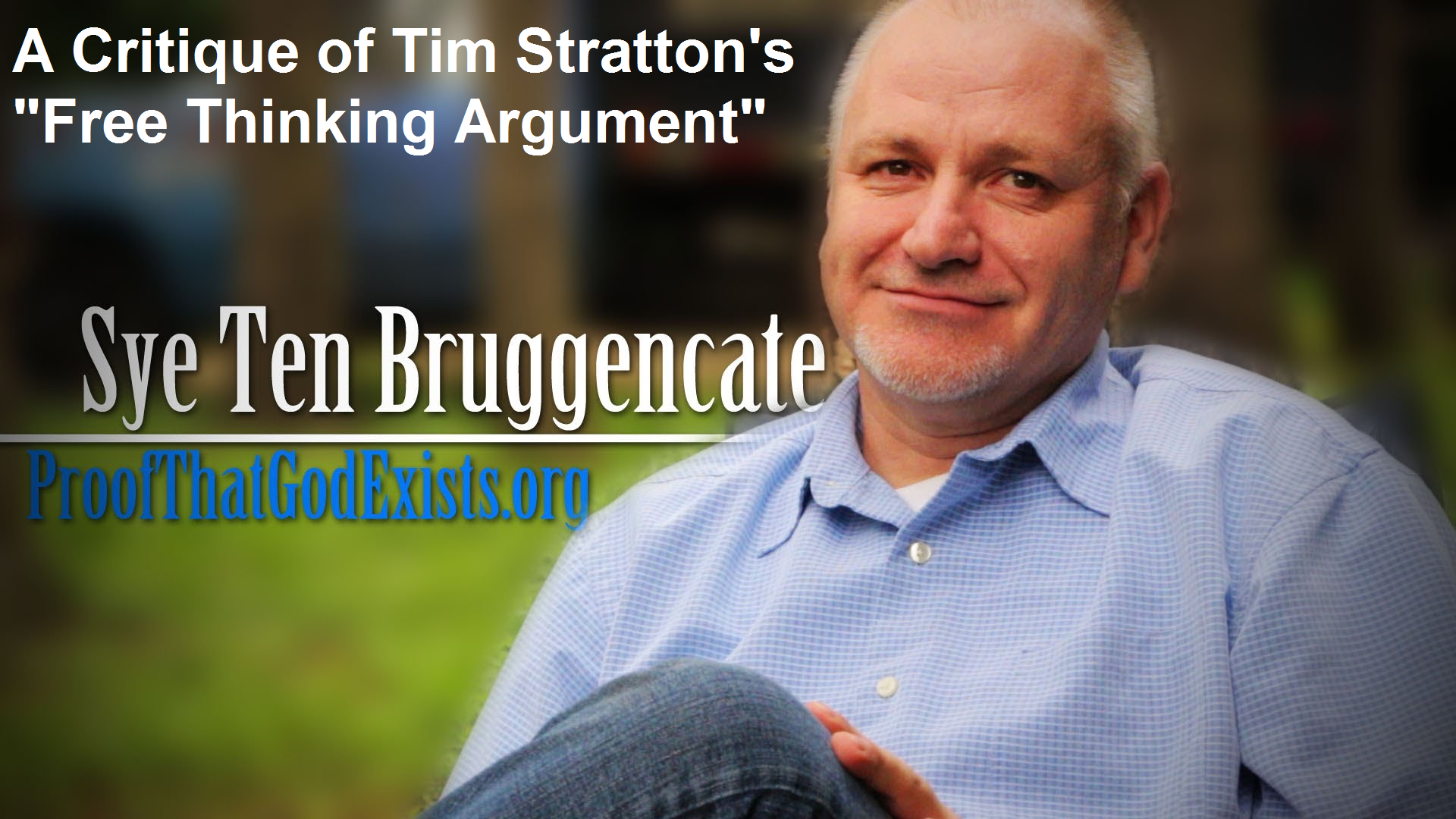 I am a strong proponent, but only a fair-to-middling practitioner of presuppositional apologetics. It is, in my opinion, the closest one can come to the truth of Scripture and to the heart and mind of God in the area of apologetics.

Several years ago, I met a man who would become a dear friend. He is, again in my opinion, the voice for this generation in the area of presuppositional apologetics. With the mind of a scholar (he’ll deny it) and the heart of an evangelist, Sye Ten Bruggencate has taken presuppositional apologetics off the top shelf of academia and handed it to people like me–laymen who simply want to represent God accurately and worshipfully in their apologetic argumentation.

A couple of days ago, I watched a video by a man named Tim Stratton titled: “The Free Thinking Argument.” Prior to watching the video, I was unfamiliar with Stratton. As I watched the video, I could hear aspects of presuppositional apologetics in his argumentation, but something seemed a bit “off.” I couldn’t put my finger on it. So, I shared the video on Facebook with the following comment: “Sÿe: what are your thoughts about this argument?”

Sye replied: “The lighting is phenominal The argument not so much smile. Plan on doing a full review of it for you in the AM Brother!”

I asked Sye if he would write an article for this blog instead of posting his review on Facebook. He graciously agreed to do so. What follows is Sye Ten Bruggencate’s critique of Tim Stratton’s video, “The Free Thinking Argument.”

The quality of Tim Stratton’s “Free Thinking Argument” video is outstanding! I’ve been working on my studio for a few weeks now, and I can only hope to get the lighting and video production to look like this! I had not heard of Tim prior to Tony sharing this video with me, but he appears to be a nice fellow who I would love to engage in conversation or debate sometime. If he ever reads this review, I hope he takes it with the best of intentions, or at very least that it does not dissuade him from sharing some studio tips with me.

Mr. Stratton’s argument, would be the evidentialist’s version of the fizzing pop argument Doug Wilson used in his debate with Farrell Till. While it is indeed the case that atheists cannot account for free thought, the evidentialist goes about exposing this fact in a far different manner than a presuppositionalist would.

Tim starts off his video by saying: “If these atheists happen to be right that God does not exist, it’s also highly implausible that the immaterial aspect of humanity, called a soul, exists.” Note that at this point Tim is not formulating his argument but laying the rationale behind his formulation of the argument. While presuppositionalists can employ hypotheticals in their argumentation, we do not take the position that God’s existence is only probabilistic and would not lay the groundwork for our argumentation in this fashion.

I believe that more often than not evidentialists do in fact believe in the certainty of God’s existence but that their form of argumentation does not allow for them to argue what they actually believe in their heart of hearts. That line (and others like it) in Mr. Stratton’s introduction did set off the alarm bells though, and led me to check out his website. My suspicions were confirmed when I saw Tim’s close affiliation with William Lane Craig who famously said “Noooooooooo” when asked by professed anti-theist Lawrence Krauss whether he was certain that God exists. Reading through Mr. Stratton’s website it would appear that the apple does not fall far from the evidential tree. He writes:

“It never ceases to amaze me how many internet atheists go to extreme, ignorant, and incoherent lengths to hold on to their faith in atheism. This is astonishing given all the evidence pointing out their worldview is probably false.”

Well Tim, it never ceases to amaze me how many Christians go to extreme lengths to argue for a probability. Surely we would question the devotion of a man who would say: “I have a wonderful loving relationship with my wife, I’m just not certain she exists!”

Now, if Dr. Craig and Mr Stratton would profess that they do in fact believe in the certainty of God’s existence I would rejoice; however their argumentation is inconsistent with such a profession. Like all the evidentialist arguments, with Mr Stratton’s “Free Thinking Argument” he seeks to conclude a probable “god” rather than start with THE God of Scripture and reason from there. Christians instructed to “set apart Christ as Lord” (1 Peter 3:15) when we defend our faith, not set Him aside. The presuppositionalist does not merely conclude God, we START with AND conclude God and expose the absurdity of any competing view that would oppose that claim (2 Corinthians 10:5) WITHOUT conceding its possibility.

Key to Mr Stratton’s argument is “libertarian free will,” but we as Reformed folk deny libertarian free will, arguing rather that our wills are in bondage to our natures (Jeremiah 10:23, Jeremiah 13:23, Proverbs 16:9, Proverbs 19:21, Proverbs 20:24 Matthew 7:18, John 6:44, John 6:64,65, John 8:43,44, John 12:39,40, Romans 8:7,8, 1 Corinthians 2:14). For example, I, having the nature of a man am free to walk, but not having the nature of a bird, I am not free to flap my arms and fly away. Similarly, those dead in their trespasses and sins are not free to choose life. Surely it is pleasing to God when a person chooses Christ but Scripture clearly states that “Those who are in the flesh cannot please God” (Romans 8:8). As Christians we are given a new nature (Galatians 2:20) and the ability to choose freely according to that nature.

I read on his website where Mr. Stratton abhors Calvinism as he claims that it “denies God’s omnibenevolence, and hence, His maximal greatness” and since it denies one of His “omni” characteristics, it therefore cannot be true. Of course we would vehemently argue against that point as everything that God does is good (Psalm 145:17) even creating calamity (Isaiah 45:7) and preparing some people for destruction (Romans 9:22). What Mr. Stratton fails to realize is that it is actually his libertarian free will view that denies God’s omnibenevolence (as well as some other omnis). Being a Molinist (like Dr. Craig), he must conclude that God did not have the power or ability to create a universe where everyone is saved, denying His omnipotence, and that He decided to create a universe in which He knew some people would end up in Hell, which would have to, according to his charge against Calvinists, deny His omnibenevolence.

Now, to my critique of the “Free Thinking Argument.”

Critique of the Argument

Premise 1- If naturalism is true, the immaterial human soul does not exist.

I do not like formulating the argument in such a way as to even hypothesize the possibility of naturalism, but I have heard presuppositionalists do this as well. It troubles me more though, when the rest of one’s theology seems to be consistent with belief in a probable “god.”

As I have written, I do not believe in libertarian free will, but I even disagree with Mr Stratton’s definition of it: “The notion that we are genuinely responsible for at least some our beliefs and behaviors.”

I affirm that we are responsible for ALL our beliefs and behaviors but deny libertarian free will. Even so, Mr. Stratton’s argument is with Scripture, not with me as we will see in the next point.

Premise 3- If libertarian free will does not exist, rationality and knowledge do not exist.

In supporting this point, Tim offers a quote from Sam Harris, but denies and entire segment of Christianity which affirms God’s determining of all things and man’s complete responsibility for their free choices. It is clear in Acts 2:23 that Judas’ betrayal of Jesus was according to God’s determined plan: “this Jesus, delivered up according to the definite plan and foreknowledge of God, you crucified and killed by the hands of lawless men.” At the same time, in Matthew 26:24, we see that Judas was 100% responsible for his actions: “The Son of Man goes as it is written of him, but woe to that man by whom the Son of Man is betrayed! It would have been better for that man if he had not been born.” Yes, the compatibility of God’s ordination of all things and our free choices is a difficult, perhaps humanly impossible concept to grasp, but to argue against it is to argue with Scripture.

Does not follow. Surely God could place knowledge into anyone He so chooses.

Depending on how you define it, many professed atheists would not deny the existence of the soul; they would just define any religious aspect out of it.

Again, this does not follow, and as an apologetic this simply does not cut it. Alvin Plantinga has made wonderful contributions to apologetics, but I was greatly disappointed in his debate with philosopher Dr. Steven Law (Unbelievable Radio program Nov. 10, 2010). When asked if his conclusion showed that naturalism was not true, or unlikely to be true, he responded: “No, that’s not the conclusion. The conclusion is rather that it’s not a belief one can rationally accept.” Sorry, but big whoop. If our argument, like Dr. Plantiga’s and like Tim’s here cannot show that naturalism or atheism is false, it is not an apologetic for THE God who says it is false.

8- The best explanation for the existence of the soul is God.

Even if one were to grant this, it would be an argument which the professed unbeliever would have used his autonomous reasoning to conclude some generic deity, not the God of the Bible, and there are no generic “gods” (Psalm 96:5). The very conclusion concedes the very thing we want the professed unbeliever to deny, that they are able to reason without God. God is not a “god” we can reason to, He is THE God we can’t reason without.

A Friendly Invitation for Discussion or Debate

As I said, I would love to discuss, or even debate these points with Mr. Stratton, so I hope that he does not take his mentor’s position on avoiding debates with us Reformed folk.

If nothing else, Tim, what camera, lens and lights did you use and how did you place them? The video LOOKS amazing!

I met Bentley and his grandfather Steve while fishing at Pride Lake, in Scott County Park. This is the story of God's gracious providence. A three-Fold Purpose For me, there is a three-fold purpose … END_OF_DOCUMENT_TOKEN_TO_BE_REPLACED