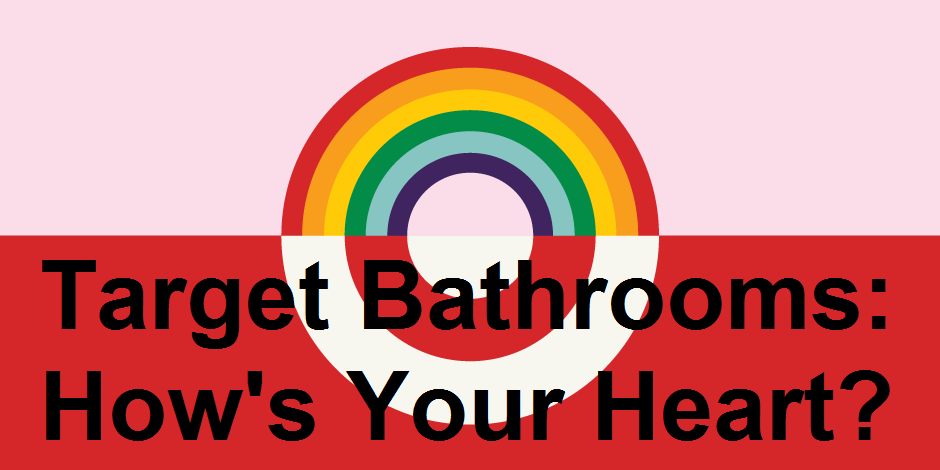 On April 20, 2016, I decided to conduct a little experiment at my local Target store. I walked in, purchased a KitKat bar, approached the cashier, and asked her this question: “If I self-identify as a Target employee, can I receive the employee discount on my purchase?” This began a chain reaction of confusion and absurdity as I then spoke to an assistant manager and the store manager. When I explained to the managers that I thought I should be allowed to self-identify as a store employee since I could now walk into the women’s restroom so long as I self-identified as a woman, the light bulbs went on in their head. They understood why I came to their store and the point I was trying to make.

You can watch the video, here. With well-over 33,000 views (granted, those are not Taylor Swift numbers) over the last five days, the video has caused a little stir and solicited a lot of reaction. Almost 300 comments have been posted. I’ve also deleted that many comments due to inappropriate content. “Likes” to “Dislikes” are running about 6-1 positive. The video has been shared by others thousands of times. For me and my little YouTube channel, this is what “going viral” looks like.

As I’ve watched the online, worldwide, social conversation play out, I’ve noticed a trend among some professing Christians, and it’s not a good one. 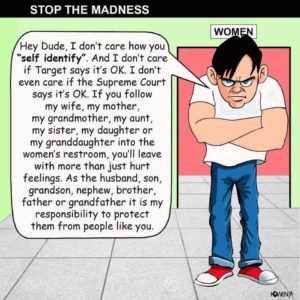 Professing Christians have been quick to rightly recognize what’s happening at Target and in seemingly every thread of the fabric of society, and that is the forcing of the LGBTQ agenda on all of mankind. They rightly see the Target situation as a moral issue and as a safety issue. But too many professing Christians are failing to see the situation as a gospel issue.

Along with the image on the left, a good friend of mine posed an important question to me. Here it is:

“If you noticed a man attempting to enter a woman’s bathroom, would you stop him? I believe that I would get between him and the bathroom and keep him from entering. What are your thoughts and suggestions?”

And here’s the immediate, off-the-top-of-my-head answer I gave him:

No, I would not–any more than I would shoot an abortionist walking into an abortuary. If the man can legally enter the women’s restroom then I would be committing the crimes of assault and/or false imprisonment if I stopped him.

What I would do is loudly warn women that a man was entering the restroom and willingly suffer any consequences that action brought.

Additionally, if any woman is foolish enough to enter a public restroom that men of various degrees of depravity and perversion can enter, then they are fools. They do NOT deserve to have something bad happen to them but, at the same time, they are certainly less likely to be accosted if they don’t enter the restroom.

I would like to add that I would also let the women in the restroom, if there were any at the time, know that I would be standing outside the door if they needed any assistance.

Many professing Christian men are bloviating on social media. They are verbally crossing their arms and pushing out their biceps to make them look bigger than they are (like the man in the cartoon image). They are mad-dogging their computer screens. And they are boasting about how they plan to physically handle effeminate, depraved men who enter the ladies’ room, in their presence.

My response to this kind of reaction: “chapter and verse?”

Let me give you an example. This comes from a woman who commented on the video: 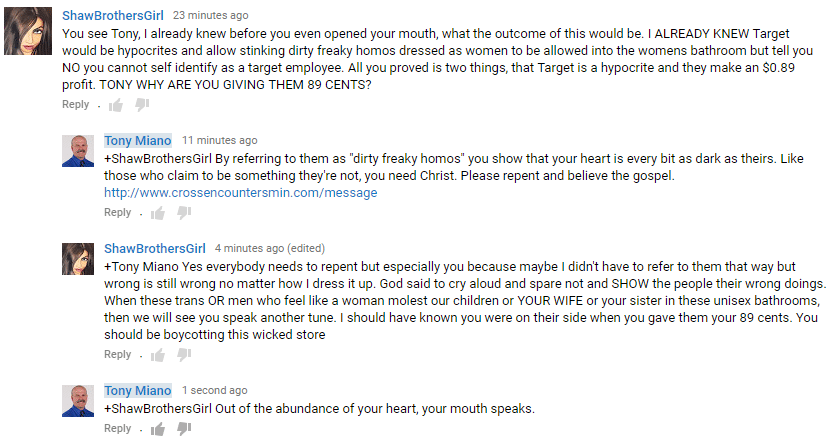 What this woman expressed first and foremost was not her concern for the safety of men and women using the correct and appropriate restroom. The overarching sentiment in her comments was her disdain for lost people whose preferred sin is sexual immorality. I think that’s what many professing Christian men are expressing on social media by threatening to commit physical assault upon men entering women’s restrooms–a hatred for their neighbors, their depraved, perverted, lost neighbors.

Target is a Gospel Issue

Emotions are running high on both sides of this critically important social issue. I understand. I’ve experienced the same emotions. However, as Christians, if we approach the issue first as a social issue we will respond like the unsaved, self-righteous, moralistic people of the world. We will respond sinfully. We will respond with sinful anger and hatred for our neighbors. And we will miss the wonderful opportunities God has and will present to His people. Christians should see what’s happening at Target and other places around the world as a gospel issue.

Christians should see Target’s decision to acquiesce to the bad behavior of a perverted few as an opportunity to bring the gospel to many.

Instead of boasting about standing outside of Target’s restrooms so they can illegally and sinfully thump on any many who dares to enter the ladies’ room, Christian men should gospel tract every car in their local Target’s parking lot, or stand outside Target and engage people (all people) in gospel conversations, or maybe conduct a silly experiment, turn it into a video, add the gospel on the end, and post it on YouTube. Instead of raging against effeminate, lost men and masculine, lost women the Christian response is to love them in action and truth. The truth is the gospel. The action is gospel proclamation.

And shame on the Christian man who would put the women in his life at risk by allowing them to use a Target bathroom, just so he can boast of his manliness by standing guard outside the restroom. If the same man really loves the women in his life, he will not take them to Target in the first place.

Regarding the Target bathrooms situation, how’s your heart?

I met Bentley and his grandfather Steve while fishing at Pride Lake, in Scott County Park. This is the story of God's gracious providence. A three-Fold Purpose For me, there is a three-fold purpose … END_OF_DOCUMENT_TOKEN_TO_BE_REPLACED