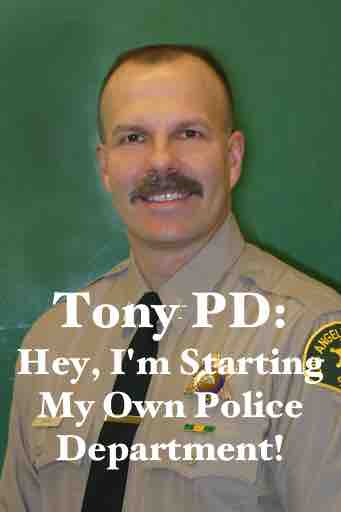 What if I told you that I decided to quit the Police Department because I didn’t like how leadership was running the department?

What if I told you that instead of finding another department with which to serve I decided to start my own department?

What if I told you that I dubbed myself Chief of Police of this new department and I have succeeded in convincing a few other disgruntled officers from my former department to join me?

Mind you, while I have served as a police officer for several years, I have no experience leading other officers. I’ve never before served as a supervisor, let alone the head of a department. Yet I’ve convinced myself I have the qualifications for the position of Chief of Police.

What do you think? Good idea or bad idea to start my own department?

Every analogy breaks down somewhere along the way. Analogies are not intended to paint pictures that are perfect representations of that which they seek to exemplify. But analogies can also serve as powerful descriptors of things and situations.

I’m confident you would have misgivings about either serving with or being policed by “Tony PD.” And rightly so.

The above analogy might seem ridiculous (and, no, I have no plans to start my own police department). But if you replace the police department with a church plant in the story you have instead a sad reality. This is how some “churches” get their start.

Might there be the occasional story here or there of a church that started this way and survived long enough to become a biblically constituted, biblically functioning church? Yes. But they are the exception and not the rule. They survive not because of how they started but in spite of how they started. And I would hazard a guess that if you were to talk to the leadership–the now biblically qualified leadership–of such churches they would likely say, “We did it wrong in the beginning.”

The unbiblical “hey let’s go start our own church” model of church planting happens from time to time among street evangelists, too. Frustrated that they can’t seem to find any churches that will accept their model of evangelism as the gold standard, or struggling to find churches that engage in any form of public evangelism at all, they set out to start their own church.

These self-appointed church planters, just as they may have called themselves to open-air preach, now call themselves to serve as pastors/elders. It is nomadism under the guise of church planting. It is “club frustration’s” (as we older street preachers used to call it) attempt to apply ecclesiology to nomadism.

Upon closer scrutiny, it would likely be discovered that some of those who set out to start their own churches struggle with submitting to authority. They don’t want to submit to authority so they make themselves the authority. They become a law unto themselves, kind of like the cop who declares himself the new sheriff in town.

In order to justify their self-call to nomadic church leadership, they might go so far as to believe and teach unbiblical, fanciful notions such as elder-led churches having their roots in Roman Catholicism and not in the Bible. Sometimes these nomadic enclaves will twist Scripture just enough to convince themselves that pastors/elders are not necessary. All they need are a few “leaders.” I mean, someone has to teach and do other things pastors would do without calling them pastors, right?

I recently watched a video in which a nomadic street preacher who is a part of a nomadic enclave of street preachers, with venom in his voice, told a pastor of an actual church that the word “evangelist” appears before “shepherds and teachers” in Ephesians 4 as if that somehow supported the notion that evangelists are more important than “shepherds and teachers.” If memory serves me, he also tried to make a point that the word “pastor” doesn’t appear in the Bible.

“There are no ‘good’ churches in my area” is not a biblical justification for planting your own church.

“None of the churches in my area are engaged in street evangelism” is not a biblical justification for planting your own church.

“None of the churches in my community are willing to go stand in front of the abortuaries” is not a biblical justification for planting your own church.

“I’m ready to pastor a church; I’m ready to shepherd people” is not a biblical justification for planting your own church.

Oh, and to be clear, having a seminary degree is not a biblical justification or a defacto qualification for planting your own church. Neither is it a prerequisite for biblically planting a church. Seminaries don’t have a biblical mandate to plant churches. Churches plant churches (here are two modern-day examples: Grace Advance and Trinity Baptist). That’s the biblical model.

If you would like to read the biblical basis for my position, please (and there is not a hint of sarcasm in my tone) read The Book of Acts and the apostle Paul’s letters to first-century churches. You will see churches planting churches. You will not find a single example of nomadic church planting.

How Can I Help?

And if you are thinking about planting your own church or you have already done so, with NO authority vested in me, I beg you to reconsider. Do whatever you must; drive as far as you must; inconvenience yourself to whatever extent necessary; change your life–move your family; find a biblical church where you can serve as an arm, a leg, a hand, a foot, an eye, or an ear in a segment of the Body of Christ that calls a biblically constituted local assembly “home.”

I’m nobody. I’m a member of a local church who, in times past, made lots of mistakes in the areas of church planting, street evangelism, and church membership. But, if I can help you I’m willing to try.