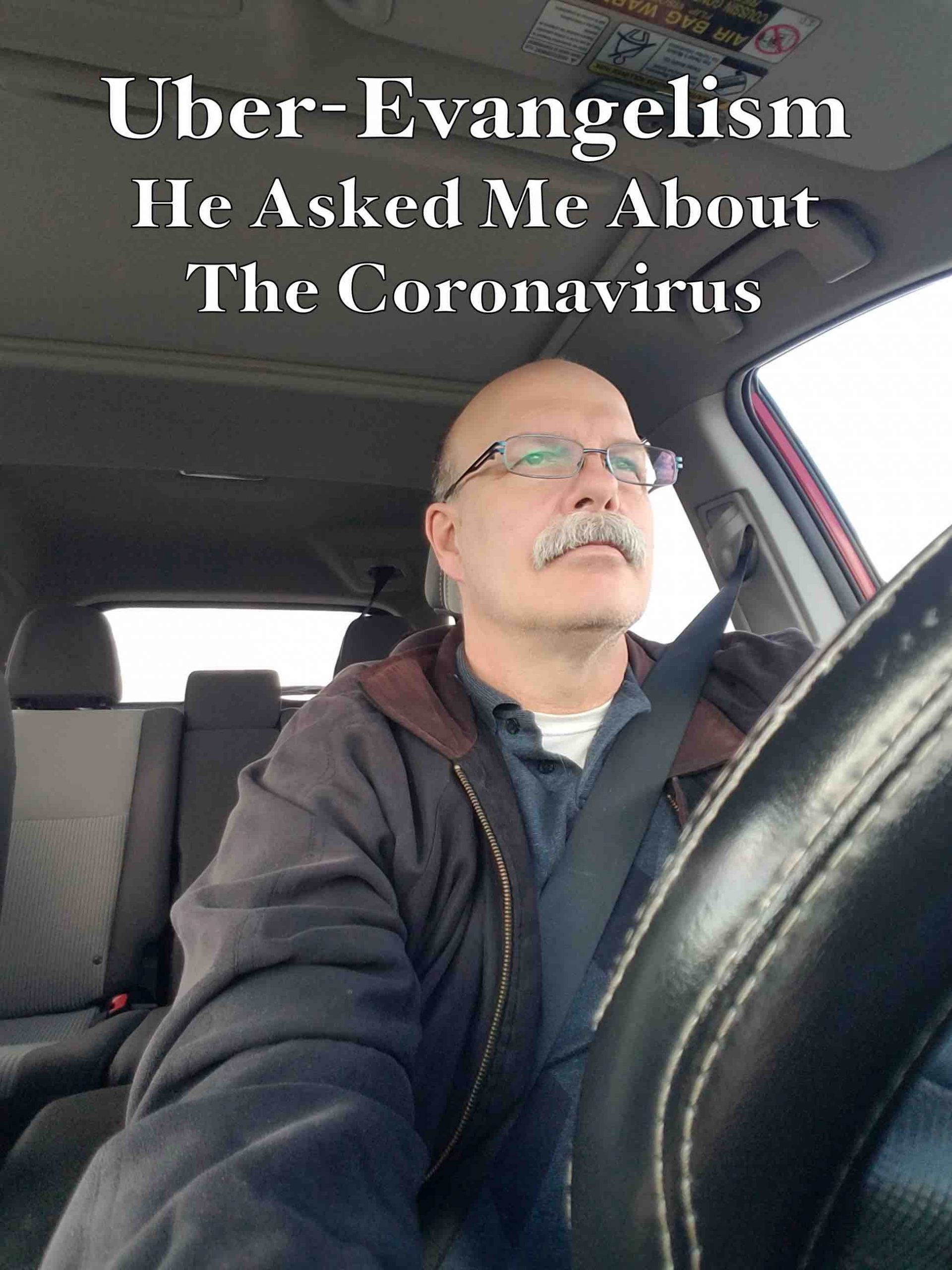 The Coronavirus is impacting practically every area of life. It is hard to find anything else on social media these days, but news about the pandemic. It’s on everyone’s mind. What wonderful gospel opportunities it is creating.

My week of Uber driving began with a very productive Monday morning–nine trips and over $50 in earnings, in just a few hours. The spread of the Coronavirus had me vacillating about driving. After all, the confined interior space of a Toyota RAV4 doesn’t allow for “social distancing” (a new term the virus has added to everyone’s consciousness). Tuesday morning’s Uber driving, before the governor’s order, was nowhere near as productive as Monday’s. Fewer and shorter rides made for significantly less income. But at least 17 people received gospel tracts between the two days. Praise God!

By Monday evening Governor Kim Reynolds (Iowa) was recommending that Iowans avoid restaurants, gyms, theaters, and any other places where ten or more people might congregate. By Tuesday morning (after I finished driving) the governor’s recommendation had become an edict. In my 56 years of earthly existence, I have never seen anything like it. The world, from my myopic point of view, was shutting down. And the global panic over the pandemic had finally reached Eastern Iowa.

I talked to Mahria about whether or not I should continue driving. She said it was up to me and she would support me either way. A few friends in my YouTube “Morning Devotions” fellowship recommended I park my car. My pastors encouraged me to keep driving.

If Tuesday morning was slow, today’s Uber driving was even slower. There were fewer cars on the road, as a result of many businesses closing their doors in compliance with the governor’s order. With fewer people going to work, running errands, etc., there are fewer people requesting rides with Uber.

My first trip of the day was with a young man named Micah. He is a defense attorney and has previously ridden with me. The drive from his house to his office, which is across the street from the police station, took all of two minutes. While en route to his office, Micah told me that our county courthouse would cease operations (but for a few exceptions) until sometime in May.

My second ride of the morning was to pick up a man named Trā.

I pulled up in front of Trā’s house and waited a couple of minutes for him. I saw Trā come out from the back of the house. A large black man with a beard and dressed in heavy, tan coveralls and a hood, Trā climbed into the backseat of my car.

“Where are you heading this morning?” I asked.

I pulled away from the curb and began the drive to the hotel where Trā’s mom was staying.

“So, what do you think of the coronavirus?” Trā asked. 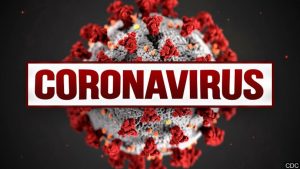 Yesterday I received 1,000 of the “Coronavirus” gospel tract I wrote with Marv Plementosh. Marv created the design and handled the layout; I wrote the text for the tract.

I took a handful with me yesterday to pick up some pizza for dinner (drive-thru and carry-out restaurants are allowed to continue those operations). I gave one to the nice young lady behind the counter. I also placed one in the car door of the car next to mine in the parking lot. The rest I left in the car.

“Here’s what I think of the Coronavirus!” I said to Trā while simultaneously handing him a gospel tract. “I wrote this.”

Trā began to read the gospel tract, and I prayed.

“What do you believe?” I asked.

“I believe that the Coronavirus probably comes from sin,” he answered.

“Trā, do you have any particular spiritual beliefs?” I asked.

“So, Trā, what do you believe will happen to you when you breathe your last?” I asked.

“I hope to go to Paradise,” he said, somewhat hesitantly.

“Do you think you have to be a good person to go to heaven or, as you say, ‘Paradise?'” I asked.

“Well,” Trā thought for a moment. “I think you have to obey the Bible.”

Does Trā Obey the Bible?

While I don’t employ the “Good Person Test” as often as I once did, I always hold the Law of God up as a mirror in front of everyone with whom I communicated the gospel. Like many Christians around the world, I have Ray Comfort to thank for that. With Trā, however, because we had a relatively short ride, I thought the “Good Person Test” would serve him well.

Trā laughed like a person who was caught in a lie.

“Have you ever stolen anything, Trā?” I asked.

“And what do you call someone who steals things?” I asked.

“Thief,” he finished the sentence.

“Have you ever been so angry with someone, Trā, that you thought, ‘I hate that person’?” I asked.

“The Bible says that whoever hates another person is a murderer. Think about it. Murder begins with hatred in the heart, which moves to the mind where it formulates a plan, and then to the hand where it might or might not carry out the act. God judges the heart, and the heart is where the murder began,” I continued.

“Have you ever looked at a woman and had a sexual thought about her you know you shouldn’t have?” I asked.

“I’m not married,” he said trying to defend himself.

“It doesn’t matter,” I answered. “Jesus said that whoever looks at a woman to lust after her has already committed adultery with her in his heart.

“So, Trā, by your own admission, you are a liar, a thief, a murderer-at-heart, and an adulterer-at-heart,” I explained. “Does that sound like someone who obeys the Bible?”

“That’s right,” I affirmed. And the God who created you is holy, righteous, and just. He must punish sin. And the punishment God has determined for sin–all of it–the sin you love, the sin you hypocritically point out in others while, in secret, you do the same–is an eternity in hell.”

“Have you ever been in a courtroom, Trā?” I asked.

“Let’s say, hypothetically, you found yourself standing before a judge, having been found guilty of breaking the law. It isn’t a case of mistaken identity. It’s not the result of corrupt officers or a corrupt system. You did the crime.

“The judge looks at you and says, ‘Trā, having found you guilty, I sentence you to death.’

“Instead of having the next 20 years to appeal your conviction, you are going to be escorted to an adjacent room, strapped to a gurney, and put to sleep like a stray dog.

“But just before that happens, the judge stands up from behind his bench; he takes off his robes of authority; steps down; looks at you, and says, ‘I’ve rightly found you guilty and sentenced you to death, but I’m going to take your place. I’m going to suffer the punishment you rightly deserve for your crime.’

“The judge then allows himself to be escorted into the next room where he is strapped to a gurney and put to sleep like a stray dog. And you are set free. The law required the death penalty, and the law was satisfied by the judge’s sacrifice on your behalf.

“What would you think of a judge who did that for you?” I asked.

“He is a righteous man,” Trā answered.

“That’s right,” I affirmed. “Trā, that’s a picture of what God actually did.”

“Two thousand years ago, God the Father sent His Son to earth in the person of Jesus Christ–truly God and truly Man, without sin. He lived a perfect life, as God-in-the-Flesh, from cradle to grave–a life neither you nor I can possibly live. Then, at a time appointed by God the Father before the foundation of the world, God the Son, Jesus Christ the Lord, voluntarily submitted Himself to death on a Roman cross. He shed His innocent blood, dying a death He did not deserve in order to take upon Himself the punishment you and I rightly deserve for our sins against God. He was buried and three days later He rose from the grave, forever defeating sin and death.

“Trā, what God commands of you is the same thing He commands of me and all people everywhere. What God commands of you, Trā, is that you repent and believe the gospel. God will cause you to be born again. He will forgive your sin. You will be reconciled to the God you have spent your entire life offending by your sin. And you will have the assurance of eternal life–not because you are good. Like me, you’re not. Not because you might go to church on Sunday and live like hell Monday through Saturday. He will forgive you on the basis of His own love, grace, and mercy that would allow His one and only Son to die on behalf of sinners like you and me.

“Does that make sense, Trā?” I asked as I brought my car to a stop in front of the hotel where Trā’s mother was staying.

“That’s what I think about the Coronavirus, Trā. And because that’s what I believe, I’ve got to share it with people I care about–people like you, Trā,” I explained.

“Thanks,” Trā said with a smile.

We exchanged a fist bump. Trā got our of the car and made his way into the hotel lobby. I pulled away from the hotel with a smile on my face, rejoicing and praising God for the gospel opportunity He had just given me.

A couple of hours later, I received an Uber request to return to Trā’a home to give him another ride. Someone else must have driven him from the hotel, back to his house.

This time I was assigned to drive Trā to the emergency room.

Apparently, while Trā visited with his mom, he told her he wasn’t feeling well. After hearing his symptoms (what Trā described as a “chest cold”), his mom told him to go to the emergency room.

Trā was certainly subdued compared to our first ride together. I asked him if he had given any thought to the conversation we had. He said he did.

Considering the question Trā asked me when we first met, coupled with his mom’s instruction to go to the emergency room, it’s not a stretch to think Trā had the Coronavirus on his mind. I hope his concern for his physical health won’t overshadow his desperate and eternal need for spiritual health, through faith in Jesus Christ.

Join me in praying for Trā’s salvation.