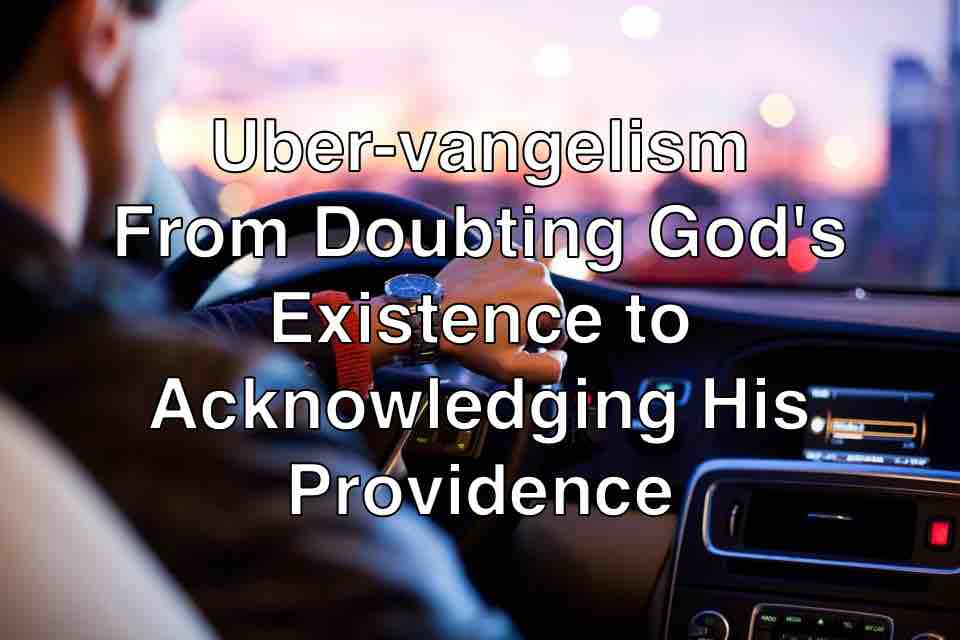 I’ve been driving part-time for Uber the last couple of weeks. The Lord has blessed me with many gospel opportunities along the way.

Here’s a recent conversation with a rider named Jay.

Tony: Good. How are you?

Jay: Good. It’s good to be in a car and out of the rain. I didn’t know it was going to rain today.

Tony: It’s supposed to be wet most of the rest of the week.

So, what’s keeping you busy today?

Jay: I was at my grandma’s house. She was supposed to give me a ride, but her car wouldn’t start. So, I had to go to Hy-Vee and get an Uber card.

Jay will enter his senior year at an area high school, in the Fall. His plans after high school are to either enter a barber college or a trade school.

Jay was curious about driving for Uber. I explained to him that a retired from law enforcement in Southern California and went into full-time Christian ministry. A few years ago a church in Davenport asked us to move from Southern California to be part of the church family. I told him that I drive for Uber to supplement my income and to give me a chance to have conversations with people.

Tony: So, do you have any spiritual beliefs? Do you go to church?

Jay: I don’t go for that stuff. I used to when I was younger.

Tony: Probably because you had to?

Tony: That’s the way I was when I was young. I want to church because I had to. What kind of church did you go to growing up?

Jay: It was a Baptist church.

Tony: Is that your grandma’s church?

Jay: Yeah. My grandma’s and my great-grandma’s church.

Tony: It must be an old church.

I laughed that the ’80s were as far back as Jay could think when thinking of an “old” church.

Tony: So, what do you think about God? Do you ever give it much thought?

Jay: I don’t ever give it thought.

Jay: I think I’m going to have to start, though?

Tony: What makes you think that?

Jay: I might need him. Let’s say I get myself into a mess. God’s not going to help me if I just come to him when I want something. So, I got to start believing in him.

Tony: He’s not a genie in a bottle.

Jay: Yeah. I got to start believing in him.

Tony: Do you think heaven and hell are real places?

Tony: What do you think a person has to do to go to hell?

Jay: A lot of stuff. They’ve got to sin.

Tony: What do you think sin is?

Jay: Sin is doing things that ain’t good–like stealing cars or shooting somebody.

Tony: Do you think you have to be a good person to go to heaven?

Jay: No. You can be a bad person. Everybody makes mistakes.

Tony: That’s true. Are there mistakes you can’t make? Is there something so bad that if a person did it there is no way God would allow him into heaven?

Jay: No, I think a person can make a bad mistake, even kill someone, and still go to heaven. But, I’m not really sure.

I told Jay the story of the Apostle Paul–a man who killed Christians for sport before Jesus saved him.

Tony: Okay, Jay. Let’s say you make that big mistake–you murder someone. It’s not a case of corrupt police officers or judge. It’s not a case of mistaken identity in which an innocent man is tried and convicted of something he didn’t do. We know those things happen. But in your case, you actually did the crime. In fact, you even confessed to doing it.

So, you’re standing before the judge. The judge sentences you to death. Unlike today, when a person has years and years to appeal his conviction, the judge is going to have you taken to the next room, strapped to a table, and put to sleep like a stray dog.

Jay: What that called?

Tony: But before that happens, Jay, the judge who has found you guilty and sentenced you to death stands up from behind his bench. He takes off his black robes of authority. He steps down and says, “Jay, you’re guilty and you deserve to die for the crime you committed. But I’m going to take your place.”

Tony: What would you think of that judge who did that for you?

Jay: He would be a savior. I don’t know how else to put it.

Tony: Jay, I think you just used the right word because that word paints the picture of what God actually did.

2,000 years ago, God the Father sent His Son to earth in the person of Jesus Christ–truly God and truly man, yet without sin. Unlike you and me who sin every day, Jesus never sinned. He lived a perfect life from cradle to grave. And then, at a time determined by God the Father before the foundation of the world Jesus Christ, God in the flesh, died a death he did not deserve on a Roman cross.

Tony: Jesus took upon Himself, Jay, the punishment you and I rightly deserve for all of the times we have sinned against God. And then He defeated sin and death when He rose from the grave.

We painted this picture of murder, but let me ask you, Jay: have you ever hated anybody?

Jay: I hate a lot of people.

Tony: Okay. Jay, God says in the Bible that whoever hates his brother is a murderer-at-heart. Think about that.

Tony: Jay, that’s what God judges. He judges our hearts.

Jay: I just learned something new.

Tony: If you were to die today, Jay (and I don’t want that for you), and God judged you by His law, He would see you as a murderer-at-heart, just for your hatred of others. You may have never swung a bat, or thrust a knife, or pulled a trigger, but He sees that murder in your heart.

Because God is good, because He is holy, He must punish sin. And the punishment He has determined for sin is an eternity in hell. The good news, Jay, is that God has made a way for sinners like you and me to receive what we don’t deserve, which is forgiveness, mercy, grace, and the love of God.

But God doesn’t negotiate with sinners, any more than a good judge negotiates with a convicted murderer. He’s provided one way for us to escape the punishment we deserve, and that’s through faith Jesus Christ. That’s good news–that God would allow His only Son to die on behalf of sinners like you and me that deserve nothing from him, but punishment. That’s good news.

If God literally causes you to be what the Bible calls “born again,” He will forgive your sin. You will be put in a right relationship with the God you have always known, whether or not you say you believe in Him.

Jay: Somebody told me that if you go to hell, you can come back and go to heaven.

People think hell belongs to the devil. It doesn’t. Hell belongs to God. That’s God’s prison. And once He sentences a person to that place, that’s it. There’s no getting out. But again, the good news is that God has made a way so that we will not have to suffer the punishment we deserve for our sin. He did that by sending His Son to die on the cross for sinners like us.

Jay: That’s the first time I ever heard about hatred in my heart.

Tony: I guess now, Jay, the important thing is what are you going to do about it? Jesus said, “You will know the truth and the truth will set you free. The Bible says we are either going to be slaves of our sin or slaves of righteousness–slaves of Jesus Christ. Those are the only options.

Now, I know you didn’t climb into this car for an Uber ride home thinking you were going to have this kind of conversation. I’m sure of that. But there’s a reason for it, Jay.

Jay: I think God is trying to tell me something.

Tony: I believe that–not because I’m special, but because the God who created you and me is special. He’s allowed you to hear the gospel today. My hope for you is that He will save you–that He will bring you to what the Bible calls repentance (turning from your sin) and putting your faith in Christ alone for your salvation.

Do you have a Bible at home?

Jay: Yeah. We have a big one that’s my grandma’s.

Jay took a copy of the Gospel of John and a gospel tract from the pouch in the seatback in front of him.

Tony: I appreciate you letting me drive you today. I’m going to be praying for you.

God bless you, Jay. Have a great day.

Jay: I hope I see you again the next time I need a ride from Uber.

With that, Jay exited my car and walked into his house.

Join me in praying for Jay’s salvation.

I met Bentley and his grandfather Steve while fishing at Pride Lake, in Scott County Park. This is the story of God's gracious providence. A three-Fold Purpose For me, there is a three-fold purpose … END_OF_DOCUMENT_TOKEN_TO_BE_REPLACED