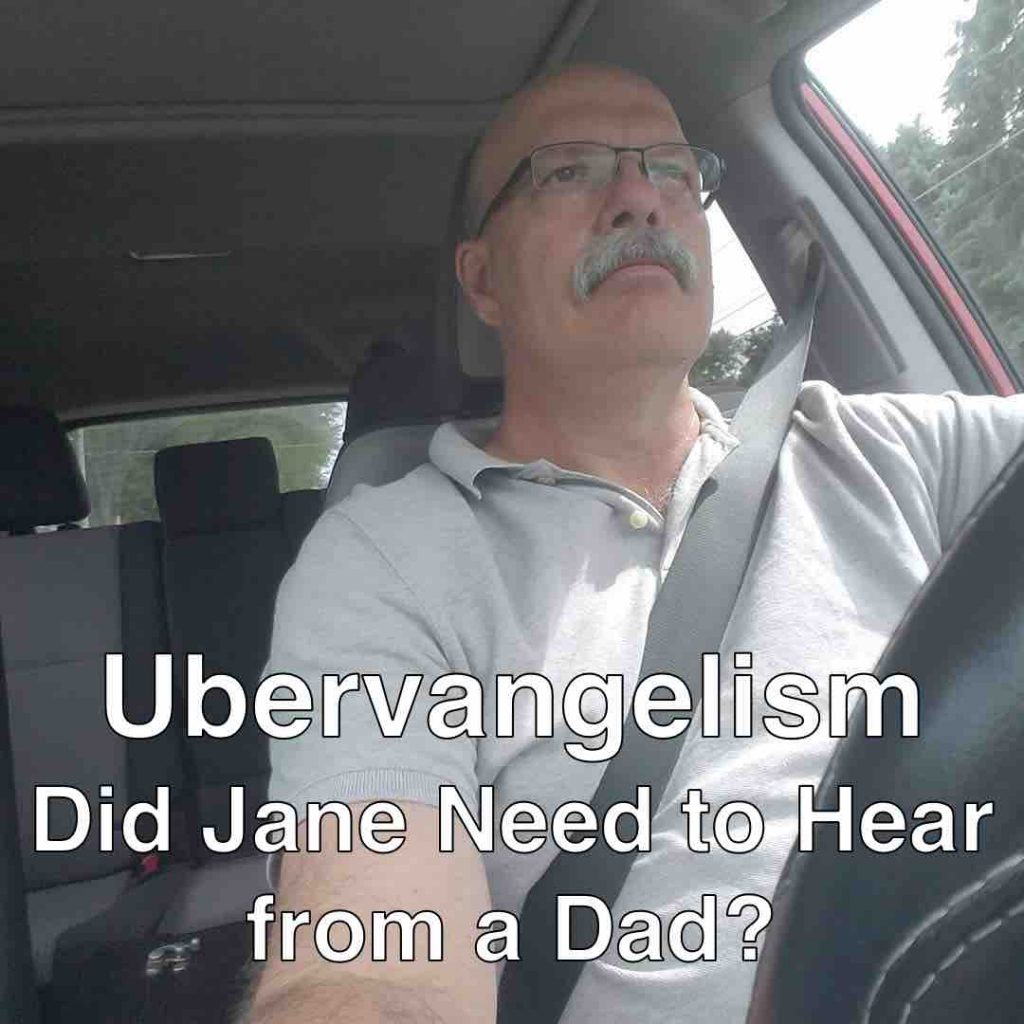 The ride request took me to the area of Bettendorf that runs along the Mississippi River, just a stone’s throw east of the Bettendorf/Davenport border. As I pulled up to the house, my rider was waiting on the front porch. Her hands were full. She tried, not too successfully, to balance a purse, an iced tea bottle, a pack of cigarettes and a lighter, and a couple of other items.

She waited until she saw me pull up to light her cigarette. How she managed that without setting something or herself on fire sort of impressed me. My second thought: “Oh, no you’re not. You’re not smoking in my car.”

I think the same thought hit her at about the same time. No sooner had she lit her cigarette and took what appeared to be a single, nervous drag that she looked in my direction and immediately put the cigarette out against the side of the concrete porch step.

Continuing to fumble with the things in her hands and arms, she made her way to my car. As she opened the door, I said, “Hi, Jane (not her real name). My name is Tony.” The Uber app gives me the first name of my riders.

“So, how do you plan to beat the heat today?” I asked.

“I’m going up to my mom’s house to go swimming.” She replied.

Jane appeared to be in her early to mid-twenties. While an attractive girl, she seemed a bit haggard—a little worn—as if the circumstances in her life aged her before her years. She certainly seemed a bit frazzled as she continued to juggle her possessions in my back seat. These are observations and not criticisms

“Oh, well, that sounds like a nice way to spend the afternoon.” I offered.

“Well, it’s better if my mom and I don’t spend too much time together,” Jane said. She went on to explain to me that the more time she spends with her mom the more likely it is that the two of them will be at odds with each other.

As I do with almost all of my riders, I offered some information about myself. I told Jane that my family and I moved to the Quad Cities about 2 ½ years ago, from Southern California. I said that while we don’t mind the Midwest heat, we’re still trying to get used to the humidity.

I told Jane that two of my three daughters (all adults) made the move with me and my wife to Iowa. Our middle daughter stayed behind in California with her husband of five years.

“He’s nine, and he loves baseball.” She replied.

“Baseball!” I exclaimed. “The greatest game ever invented!”

“Yep,” Jane said. “He told me he’s never going to play football. He said he thinks it’s stupid to go out there and get pounded on.”

“You know, more and more parents are keeping their kids from playing football, with all of the issues surrounding concussions.” I offered.

“My son mentioned that as one of the reasons he doesn’t want to play,” Jane said.

We continued making small talk for a few minutes. I looked at the Uber app displayed on my phone. We only had a few miles until we arrived at Jane’s destination. I wondered if our conversation would turn spiritual. I knew that would be up to me. Or would it?

Giving Away My Daughters

“Was it hard to give your daughter’s hand to another man?” Jane asked.

There it was. In God’s providence, there it was—the segue into a spiritual conversation.

In the brief seconds between the time Jane asked the question, seemingly out of the blue, and the time I began to answer my head flooded with information—most of it speculation.

It dawned on me that while Jane talked about her mom and her four brothers, while she gladly talked about her son, there was no mention of her dad. Was he alive? Was he still in the picture? Were her parents divorced? Was dad still around, but were there issues in Jane’s relationship with him? Jane could have been older than I thought, but if she wasn’t then that meant she probably had her son as a teenager or young adult. She also never mentioned a boyfriend, husband, or the father of her son.

Again, the above is a basket of assumptions—a potpourri of speculation. But I heard something in Jane’s voice—something that told me the young woman in my back seat might need to hear something positive from a dad.

“Jane, as a Christian father there is nothing I want more for my daughters than to be able to put my daughters’ hands into the hands of godly men who I can trust to take care of them and lead them after I’m gone. My eldest daughter married a man in our church less than a year ago. So, I’ve got two down and one to go! My wife and I are waiting for God’s man to come and take our third daughter away. I love my two sons-in-law very much. I thank God for them because I know they are the men God has for my two daughters.”

It Got Quiet Back There

It got very quiet in the back seat. I knew I took a bit of a risk saying all that, not knowing the state of Jane’s relationship with her father. What if her dad felt the same way about Jane as I felt about my daughters and Jane despised him for it? What if that was what she always wanted from her father but didn’t receive it. Or, what if her relationship with her dad was damaged when she became pregnant out of wedlock–if that’s what happened? What if she thought she would now never have the chance to have her dad walk her down the aisle to give her away in the traditional and biblical sense?

More speculation on my part. But it sure was quiet in the back seat. Something I said struck a nerve. Which one? Which nerve?

The silence was soon punctured by a brief diatribe about how she could never get away with anything as a teenager. If she was five minutes late after curfew she would be grounded for weeks. Yet her younger brothers can roll in whenever they want and nothing happens to them.

By now I was pulling into Jane’s mother’s driveway. I was disappointed by the realization that I wouldn’t have a full gospel conversation with Jane. So, I did the next best thing.

“Can I Give You One of These?”

“Can I give you one of these?” I asked, as I turned in my seat toward Jane and handed her one of my church’s gospel tracts. “I hope you and your son have a great afternoon. And I hope your time with your mom today is good.”

Jane took the gospel tract from my hand. A moment later she slowly, almost sheepishly handed it back to me. But not to return it.

“Would you write your name, your wife’s name, and your phone number on it?” She shyly asked.

“I always wanted to go to church as a kid, but we never did.” She offered. “I’ve thought about reading the Bible. Maybe I should start.”

In the back of the seat in front of Jane, which would be the front passenger seat, I keep a supply of copies of the Gospel of John. Since I had to reach back toward Jane to grab it, I alerted her to the fact that I wanted to take something out of the seat pocket. I didn’t want my movements to make her uncomfortable.

The Gospel of John

“Jane, I would like to give you something. It’s in the seat pocket in front of you.”

I removed a Gospel of John from the seat pocket.

“The Gospel of John is a great place to start reading the Bible if you’re not used to reading it. I have here for you the entire Gospel of John in booklet form. It’s very easy to read. I think you will get a lot out of it.” I said.

I wrote mine and Mahria’s names and my cell phone number on the front of the gospel tract.

An Offer of Fellowship

“Jane, you don’t know me. I’m just your Uber driver. But I want you to know that if you and your son would like to join me and my wife for coffee or come over for dinner some time to talk, we would love to have you.

“No salesman will come to your door. All I know is you’re Jane; that’s it. You’ve got my name and number so it will be up to you to call. But know that my wife and I care about you and we will be praying for you.

“On the back of the tract is information about my church. We’re a small church—only about 100 people. But 60 of us are under the age of ten. And we’ve got quite a few boys your son’s age who love baseball, too. You and your son are welcome, anytime.”

“Thank you so much,” Jane said.

“God bless you, Jane. I hope you have a great day, and I hope to hear from you soon.” I said.

She gathered her belongings and stepped out of my car. Her countenance seemed a bit brighter than when we first met. We said our goodbyes and I drove away praising and thanking God for the opportunity he had just given me.

God, in His magnificent providence, orchestrated my encounter with Jane. There was something about talking to Jane about wanting to see my daughters married to godly men that resonated with her. Did she just need to hear from a dad at that moment? Was that the connection? I don’t know. Maybe someday Jane will tell me. I hope the Lord allows me to see her again. I hope He saves her.

Ten years ago I had a conversation with a Boise State University student named Mohammed. The Lord is still using it. A Recent Email Recently, I received an email from a man named Ali--a Christian … END_OF_DOCUMENT_TOKEN_TO_BE_REPLACED