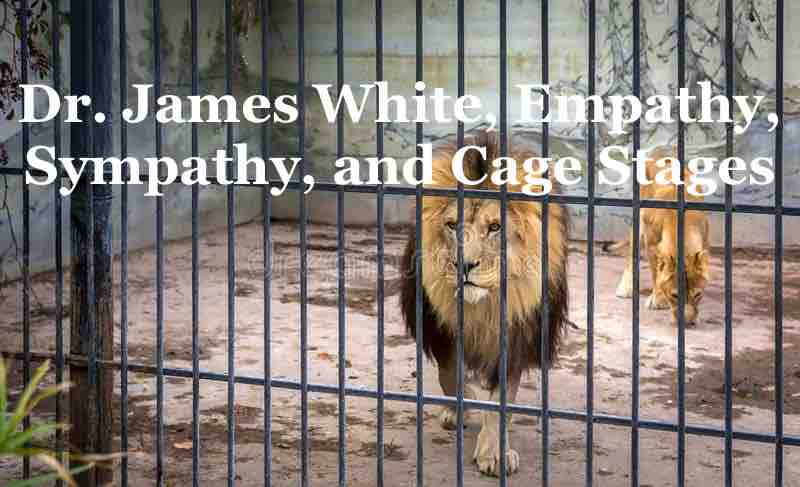 I agree with Dr. James White. Some readers might be disappointed to read that, so let me say it again. I agree with Dr. James White. His position regarding the distinction between sympathy and empathy is biblical. While I have little to add to the “Is empathy sin?” conversation, I would like to provide a word of caution regarding the “cage stage” into which some may enter when they realize that sympathy and empathy are not synonymous terms and only one of them is biblical.

On March 11, 2021, Dr. James White posted a couple of tweets regarding empathy and sympathy and, as Dr. White described the response, he “broke the Internet.”

So a couple of days ago over on Twitter, where I continue to fly just underneath the radar, I broke the Internet. Of course, I made the fatal mistake of thinking, “Folks will think before reacting” (duh), “Folks will look up the terms and see what I’m talking about” (duh), “People will realize there is a background to what I’m saying” (duh again). Instead, articles were written, and once again, I was written off as a waste of flesh…nearly 40 years of ministry gone! What on earth did I say?

Well, actually, one tweet did not get much traction, but the other did, yet they were related. Here they are:

That was the first one. Pretty basic, back to the Scythian Test, Colossians 3, new identity in Christ, freedom from the past, newness of life in Christ, Christian identity rather than a worldly one, basis of unity for the Body, all that stuff that is currently being rejected even by the evangelical elites. But then came the next one, the one which broke the Internet: 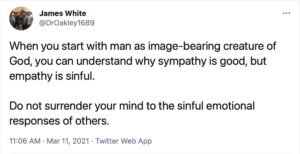 You can read the rest of Dr. White’s Facebook commentary regarding the response to his tweets, HERE. I encourage you to do so. I believe you will be edified.

I also want to commend to you this conversation between Doug Wilson and Joe Rigney regarding empathy, which is available on Amazon Prime.

I also recommend this shorter discussion with Pastor Joel Webbon of Covenant Bible Church (Austin, TX), “Is Empathy a Virtue or a Sin?”

And I also recommend biblical counselor Rick Thomas’s article (and podcast), “The Destructive Force of Empathy, and Why You Need to Know.” While all three of these resources are useful, I particularly liked Rick Thomas’s succinct definitions and the associated illustrations of sympathy and empathy.

Beware of the “Cage Stage”

In my introductory paragraph, I used the term “cage stage.” What is a “cage stage?”

I was introduced to the term “cage stage” by Greg Dutcher, in his book “Killing Calvinism: How to Destroy a Perfectly Good Theology from the Inside” (Cruciform Press, 2012). But the term is older than that. Dr. James White was writing about it in 2007.

In his two-paragraph article from that year, “How to Avoid Cage Stage-itis,” White provides a not-all-that-satirical definition:

“I’ve seen it many times. The Cage Stage. A believer’s eyes are opened to the majesty of God as the sovereign King of the universe, and their entire life is turned upside down. And for a while, they have more zeal than they have knowledge. We call it the “cage stage.” That period in the experience of the new Calvinist where they would be better off kept in a cage until they can gain enough maturity to handle these vitally important topics aright. That time when they are more likely to hurt themselves, and others! You know, when they are all running around smacking someone upside the head with Pink’s The Sovereignty of God? Yeah.”

Cage stages are not limited to Calvinism. In a 2014 article, in which I cite White’s article, I identified a few other places where it can be found:

“Unfortunately, ‘cage stage-itis’ is not limited to the Calvinism/Arminianism debate. This ‘itis’ extends to topics like evangelism, worship, church governance, Bible translations, and, most recently, eschatology. Cage stages never bring out the best in Christians. The current social media buzz about eschatology proves the point.

Cage stages can be likened to a malfunctioning pendulum. 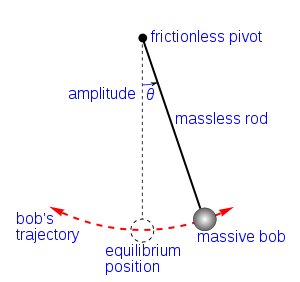 For the purpose of this analogy, we will call our cage-stager “Bob,” which also happens to be the name of the weighted item at the end of the string or wire, in a pendulum.

Bob, a Christian, comes to realize that empathy is an unbiblical construct. He looks back on years of unbiblical counsel he provided to friends and family. He realizes that in a genuine effort to help them in most cases he provided no help at all. While making people feel better in their painful, often sinful circumstances, he didn’t do anything to help them out of those circumstances. Instead, he simply further enabled and justified their sinful emotions by joining them in their pain, sorrow, and often self-inflicted misery. He allowed genuine sympathy (compassion) to morph into unbiblical empathy.

Determined not to let that happen again, Bob quickly, unintentionally, and unwittingly goes from one extreme to another. His trajectory swings from the extreme amplitude on one side of the arc to the extreme amplitude on the other side of the arc. This isn’t unusual. But something happens as Bob flies past the point of equilibrium–that position in the arc of the pendulum where the “bob” comes to rest (we’ll call it “mature, biblical Christian sympathy”). Instead of swinging back and forth, decelerating with each swing past equilibrium and getting closer to biblical sympathy, Bob gets stuck at the opposite end of the pendulum. This opposite end of the pendulum is also unbiblical and can go by many names: indifference, undue criticism, harshness, unsympathetic, impatience, and the like.

Bob beats hard the drum against empathy. The drum is so loud in his ears, however, he doesn’t hear how far away from sympathy he has drifted. Inside the barred enclosure Bob now finds himself is the raw meat of empathetic Christians with whom, not all that long ago, Bob was in theological and philosophical league.

Bob has forgotten how wrong he once was regarding empathy as he launches salvo after social media salvo to ferret out Christian friends in order to tell them how wrong they are. He now confuses confrontation with compassion. He’s the pied piper that is going to lure every empathetic Christian out of town.

Worse yet, a friend comes to him for support and the unsympathetic counsel Bob gives can be surmised in brief: “You’re in sin. Suck it up and deal. Repent!” So committed to not join his friend in his issue, Bob thinks he’s being sympathetic by not being empathetic. In his noble desire for theological precision, Bob is losing the ability to care for others.

Bob is in the “cage stage.”

Theological precision matters. Doctrine divides. Nothing in this article can be construed to suggest I believe otherwise.

The unbiblical doctrine of empathy is responsible, at least in part, for much of the unbiblical ideology that plagues American Evangelicalism. Critical Race Theory and the Social Justice Gospel, egalitarianism (including female pastors and preachers), feminism, the legitimization of same-sex attraction, friendship evangelism, even the sinful notion that it is somehow loving our neighbors to keep the doors of local churches closed until governments say they can re-open all have the leukemia of empathy coursing through their veins.

However, cage stages are dangerous and are often a result of overcorrecting. Some people never get out of their chosen theological or philosophical cage. Rick Thomas, in his article “The Destructive Force of Empathy, and Why You Need to Know,” provides this word of caution:

“We live in an over-correcting culture. Rather than seeing the abuses (or whatever the issues are), which is typical in a fallen world and reacting with common sense and wisdom, we oversteer the car to our detriment. We want to put ourselves so far from the scene of the crime that we create another crime that only complicates the pre-existing problem. We may feel better about ourselves because we did not repeat the mistake we’re running from, but the problem we’re creating not only buries what we don’t want to repeat but it compounds the problems by the overreaction.”

If you have come to understand that empathy is not a biblical construct, the practice of which is partially responsible for the implosion of American Evangelicalism, don’t over-correct and lose touch with the beautiful doctrine of sympathy. Be like Jesus who was sympathetic, not empathetic with our weaknesses.

“For we do not have a high priest who is unable to SYMPATHIZE with our weaknesses, but one who in every respect has been tempted as we are, YET WITHOUT  SIN” (Hebrews 4:15, emphasis mine).

I met Bentley and his grandfather Steve while fishing at Pride Lake, in Scott County Park. This is the story of God's gracious providence. A three-Fold Purpose For me, there is a three-fold purpose … END_OF_DOCUMENT_TOKEN_TO_BE_REPLACED