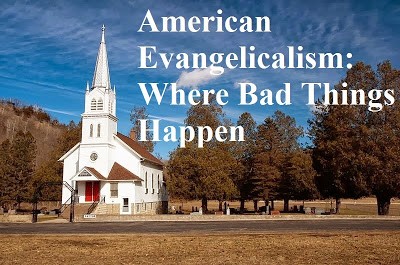 What I Believe about American Evangelicalism

I believe American Evangelicalism is a Christ-less religious system that creates myriad false converts and is used by Satan to deceive the lost and to lead astray, as if it were possible, even the elect (Matthew 24:24). The children of a generation ago raised on Foosball, Pizza, emotionalism, bad teaching from untrained, unqualified man-cubs, and a sinner’s prayer every Tuesday night for reassurance are today’s American Evangelical pastors. And the state of American Evangelicalism isn’t sliding, but is free-falling, from bad to worse.

I shudder and my heart breaks at the thought of the untold masses, boasting of membership in American Evangelical churches, who will stand (or who have already stood) before Christ, rubbing their hands together, just waiting to receive their condo in the sky, only to hear Jesus say, “I never knew you; depart from me, you workers of lawlessness” (Matthew 7:21-23). False converts who made false commitments to a false Jesus represented in a false gospel, which was presented by a false pastor. American Evangelicalism, as a system, is false.

While American Evangelicalism is not Christian, there most certainly are Christians within this demonic system–both solid churches that are included in the definition of “evangelical” and remnants of God’s people in churches that are not His. When I speak of American Evangelicalism, I am not speaking about the Bride of Christ. While not yet fully sanctified, she is beautiful and she is cherished by the Bridegroom. Shame on and warning to anyone who mocks the Bride of Christ–the true Church.

I have not received any new revelation from God about being a very outspoken critic of American Evangelicalism. While some may think I rant on my keyboard while wearing a camel hair kilt, with honey dripping from my goatee (can’t quite get passed the crunch of the locust), I don’t. I know I am not a lone voice crying in the American Evangelical wilderness. I know there are many brothers and sisters in Christ who agree with me. But, even so, a minority we make. I believe the genuine Body of Christ is much smaller than I or anyone else realize. It is certainly smaller than American Evangelicalism would have the world believe.

Last night, American Evangelicalism, that reoccurring bur under my saddle, got me thinking…..and tweeting.

Where everyone’s will is free…..except God’s.

Where Katy Perry’s Half-Time Show is an acceptable form of worship.

Where any man (or woman) can be a pastor…..no qualifications needed.

Where a pastor’s “spiritual vision” can be 20/200, but he’ll still get the keys to the family car.

Where more biblical titles can be found in Barnes & Noble than in the church bookstore.

Where vacationaries are called missionaries and they actually believe they’re reaching the world for Jesus.

Where you can find Joyce Meyer’s and John MacArthur’s study bibles on the same shelf, in the Christian bookstore.

Where calling people to the stadium floor, getting them to repeat a prayer, and then welcoming them to the family of God on the Jumbo-Tron is seen as biblical.

Where 80-90% of the people’s giving go to staff salaries and facility upkeep, while missionaries beg and starve.

Where church and ministry leaders can be found on the local crime blotter, but will be “restored” to ministry in a matter of weeks.

Where bibles are optional (from pulpit to pew) on Sunday morning, but coffee is not.

Where the first song on Sunday morning isn’t really a call to worship, but a stall tactic to accommodate late arrivals.

Where Bill Johnson, Joel Osteen, Mark Driscoll, Russell Moore, and the Pope can all coexist. And it’s seen as a good thing.

Where some pastor will replicate Katy Perry Liger Zoid ride to make his entrance on a Sunday morning.

Where a pastor can boast about how little time he spent preparing his sermon and his people will smile.

Where pastors have their own lines of clothing.

Where the Message and the New Living Translation are considered viable options for deeper study and the Purpose Driven Life is considered deep theological reading.

Where…..oh, just fill in the blank. Whatever the world is doing, American Evangelical is doing, but with less talent.

Yes, sadly, the list could go on and on and on. But I think (I hope) you get the point. American Evangelism is where bad things happen.

I met Bentley and his grandfather Steve while fishing at Pride Lake, in Scott County Park. This is the story of God's gracious providence. A three-Fold Purpose For me, there is a three-fold purpose … END_OF_DOCUMENT_TOKEN_TO_BE_REPLACED