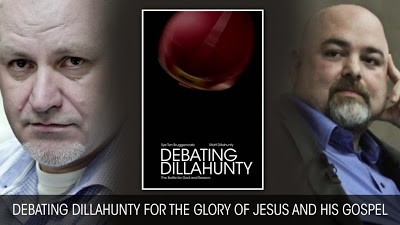 For the record, and for the purpose of full disclosure. I am an unapologetic apologist for Sye Ten Bruggencate. He is my friend. I love him as my brother in Christ, and I am indebted to him for his work in presuppositional apologetics. I know Sye’s labors have not been in vain, for they have produced fruit in my life and ministry.

I watched Debating Dillahunty for the purpose of providing a review of the film. I entered into this process carrying with me the presuppositions that Sye would represent Christ and His truth well, and that the lies Dillahunty would tell regarding God would be evidenced by the fact that his lips were moving. Dillahunty is not my friend.

No, I don’t hate Matt Dillahunty. I pity him. I pity him the way I pity every human being who denies the God they know exists (Romans 1:18-25). I pity Matt and people like him because the Dillahunty Delusion (an all-too-common malady) is simply a byproduct of an absurd worldview (one that searches for coherence and meaning without God), which is born out of a love of self, a love of sin, and a hatred of God (Romans 1:31-32).

The video begins by introducing the viewer to Matt Dillahunty, host of the online program “The Atheist Experience.” Sye’s detractors, which are legion, might come away from the opening scenes with the impression that the producers of the film sought to poison the well against Dillahunty. I don’t believe that’s the case. Dillahunty is an unashamed hater of God and a hater of God’s people. The film simply paints him in his true light, at least as it pertains to his interaction with Christians. You can’t poison a well already already poisoned by a heart blackened by haughty depravity.

From here, the film moves into the debate proper. And from here, it becomes increasingly difficult to write a review. The reason: I want to write about every moment of it. The film is that good. However, to chronicle every moment of the film would make this review extremely long and might discourage people from watching the film. That would be a shame–an injustice, really.

In his opening statement, Sye declares the debate over before it starts. He declares, “Matt’s world view is dead; it just doesn’t have the courtesy to lie down.” He then proceeds to expose the inconsistencies of Dillahunty’s worldview, using Dillahunty’s own words to do it.

Matt Dillahunty begins his opening statement of the debate by mocking Sye’s opening statement. This is a common tactic among the intellectually dishonest and unarmed. “I can’t defeat my opponent, so I’ll mock him and/or his position.”

15 minutes into a 45-minute film, Debating Dillahunty is over, but only in the sense that the debate is over. However, don’t touch that remote or mouse. Take a deep breath and enjoy watching a man of God not only beautifully articulate the mind of God, but also the heart of God. You see: Sye does not see Matt Dillahunty as merely an intellectual opponent–someone to beat in a debate. Sye sees Matt as a pitiful soul, a fool (not as a character assault, but as a moral judgment). Sye sees Matt as a man who is lost and will one-day stand before the God he has always known–the God who, unless Matt repents and receives Jesus Christ as his Lord and Savior, will punish him in hell-fire for all eternity.

“Say to them, As I live, declares the Lord God, I have no pleasure in the death of the wicked, but that the wicked turn from his way and live; turn back, turn back from your evil ways, for why will you die, O house of Israel” (Ezekiel 33:11)?

So, why did Sye Ten Bruggencate agree to debate Matt Dillahunty? Well, I’ll let Sye answer that question with his own words. But you won’t read them here. You’ll have to watch the last eight minutes or so of Debating Dillahunty.

I met Bentley and his grandfather Steve while fishing at Pride Lake, in Scott County Park. This is the story of God's gracious providence. A three-Fold Purpose For me, there is a three-fold purpose … END_OF_DOCUMENT_TOKEN_TO_BE_REPLACED