In “Part 1” of this series, I elaborated on what kind of video equipment I have and made a recommendation for a video camera suitable for street evangelism use. In “Part 2,” I will discuss two digital voice recorders I use in my evangelism efforts.

When I served as a field training officer for the Los Angeles County Sheriff’s Department, I required all of my trainees to carry a voice recorder. “Make sure your gun is clean, loaded, and ready to go. And make sure you have fresh tape (back in the days before digital media) and batteries in your voice recorder.” I told every trainee.

Having a voice recorder is as essential when engaged in street evangelism as it was for me when I worked the streets as a deputy sheriff. Whether on a college campus, a street corner, in front of an abortion clinic, or at a train station, I try to always have a voice recorder (sometimes two) with me.

Again, it is imperative that you check the laws in your state (or country) regarding the recording of conversations. 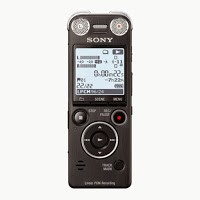 I’ve used several different voice recorders over the years. One that I found very reliable, and continued to work great after it was run over by a car in Norway, is the Olympus DM-620. This sturdy unit produces great sound quality and has a nice internal microphone.

Today, I use both a high-end and a low-end digital recorder. On the high end ($210-$249), I use the Sony ICD-SX1000. This is a professional-grade digital recorder, with superior recording capability and sound quality. On the lower end ($39-$49), I use the SanDisk Sansa Clip Zip. The newer models have more bells and whistles than the model I have. For an inexpensive and small unit, it produces surprisingly good sound. This little unit is excellent for one-to-one conversations when you don’t want anyone to know you are recording. It is also suitable for open-air preaching applications.

In “Part 3” of this series, we’ll take a look at amplification systems.

Today I was blessed with the opportunity of preaching the chapel message at Unity Christian School, in Fulton, IL. The invitation came through the school's choir director, Paul Hopkins. My … END_OF_DOCUMENT_TOKEN_TO_BE_REPLACED