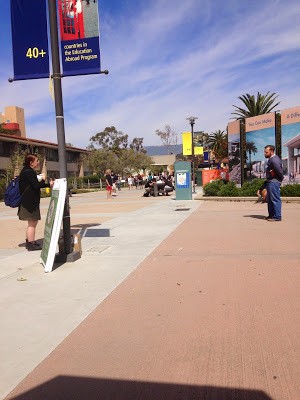 Yesterday, Keith Darrell and I spent the afternoon on the campus of UC Santa Barbara. Known for its beautiful seaside location, reputation as a “party school,” and 15,000 bicycles, UC Santa Barbara, like every university campus, is a place filled with people who need the gospel.

Keith and I began our time on campus with prayer. As we sat in the cool shade of a tree, we noticed an elderly gentleman standing behind a very creative, handmade booth. It literally looked like this. No doubt that was the intent.

Of course, there were some clear differences between the older man’s and Lucy’s booths. The man was not offering psychiatric help. He was offering advice and answers to questions. He did have a small donation jar, but he also had a small, bi-fold, paper tent sign that assured people his services were free.

Keith had before seen the man and his booth on campus. Since the man was set up so close to where we planned to spend the day preaching, we approached him to find out what his plans were for the day. His name was Larry. After very brief introductions, Larry asked to hear our Christian testimonies, which we did not hesitate to provide.

Larry was noticeably cautious with us. Throughout the conversation he gently made his opinion known that conversations with students is a better than open-air preaching, for reaching them with the gospel. Doing our best to respond to Larry with the kindness and gentleness he showed us, Keith and I tried to explain to him that if we are all proclaiming the biblical gospel, of which we are not ashamed and which is the power of God for salvation (Romans 1:16), then our preferred methodologies are of little account. Of course, we stressed the fact that our methodologies should not be overtly offensive, while recognizing that the cross, in all of its biblical presentations, is an offense to those who are perishing (1 Corinthians 1:18).

After our conversation, Larry decided to move his booth to the opposite side of the courtyard, only a couple hundred feet away. Throughout the day, I looked toward Larry’s booth, almost always seeing him engaging a student in conversation. During our conversation with Larry, I was left with no reason to question the authenticity of his profession of faith. So, I rejoiced that Larry was communicating the gospel to students, in a way that was in keeping with his personality and godly preferences.

Here’s the audio of our conversation with Larry:

Keith and I are different preachers who herald the same message. That should come as no surprise. No two open-air preachers are alike in every way–at least they shouldn’t be–accept for the gospel. Keith’s grasp of apologetics, the sciences, and philosophy eclipses my own several times over. I can sit and listen to Keith preach and teach all day long. He has the stamina of a German Shepherd, the tenacity of a terrier, and the gentleness of a retriever. Yes, Keith “doggedly” preaches the gospel. Sorry. Couldn’t help myself.

I started our open-air preaching with a general law and gospel message, which I followed with the public reading of John 1-3. Here’s the audio for my first open-air and Scripture reading:

As I distributed the Gospel of John, Keith began his first open-air message for the day. Almost immediately, he was engaged by a very pleasant student who professed to be an atheist (see the above photo). The interaction drew a small crowd that listened intently for some time. Keith was, of course, intentional about weaving the gospel throughout the exchange of ideas. And he left the young woman to contemplate that no matter how ardently she denied it, she was, in fact, a relativist.

While Keith preached in the open-air, I continued distributing copies of the Gospel of John to those passing by–to those who would accept the free booklet. As happens often while distributing gospel tracts, many people when indicating they do not want a tract will say, “No. I’m good.” What most people mean when they say that is that they believe they do not need what is being offered to them. A young man named Daniel walked by and said just that: “No. I’m good.” Wanting to engage Daniel in conversation, I asked, “Can you give me your definition of ‘good?'” Twenty-five minutes later, Daniel accepted the offer of a copy of the Gospel of John.

Here’s the audio of my conversation with Daniel:

Not an Offer of American Evangelicalism

As Keith “tapped out,” and I began my last open-air message of the day, I had a sense in my heart that I needed to preach a message to the students in which I made a clear distinction between American Evangelicalism and biblical Christianity. In doing so, I knew it would be important to stress that there is a cost, a real cost, for following Jesus Christ. While the crowd was small, those present listened intently, with most staying for the entire message. Following the message, a number of students accepted copies of the Gospel of John. It also led to a good conversation with a freshman named Michael who recently converted from the Church of the Nazarene to the Orthodox faith.

Here’s the audio of my last open-air sermon of the day:

Those who know me well know that I am not one to look for or find demons under every rock. While I fully believe in the spiritual forces of darkness (because I believe the Bible), I think much of what I see on the streets in the behavior of people can be attribute to their sinful hatred of God and love of self, and not the direct, possessive influence of Satan. However, there have been times in the last decade when I’ve been left to wonder, to the point of almost being convinced, that I had been in the presence of a demon-possessed person.

Yesterday on the campus of UC Santa Barbara it happened not once, but twice.

When we arrived at our spot on campus, we noticed a middle-aged woman sitting at a nearby picnic table. We never could determine what she was doing, but she had the picnic table covered with a large piece of black felt or cloth. While distributing copies of the Gospel of John, I approached the lady as she was packing up to leave.

The woman had a look in her eyes that gave me the impression she was there and, at the same time, she wasn’t there–if you know what I mean. I asked her if she would like a copy of the Gospel of John. She immediately became hostile. The audio doesn’t do the encounter justice. Her posture, the look in her eyes, her facial expression, and the tone of her voice: every aspect of the encounter left me wondering if I had been in the presence of a demoniac.

Here’s the audio of our very brief interaction:

The second suspicious encounter was with a large man in his mid-30’s. He was dressed in black, with very dark sunglasses, and (I’m not kidding) an Anton Lavey-esque goatee.

As I preached my last open-air message of the day, the man stood a short distance away and to my right. He stood with his arms folded, eyes locked on me, and a very unhappy look on his face.

At one point during my message, I asked those gathered and listening if anyone had lived a perfect life. The man in black slowly and methodically raised his hand. “Sir?” I asked. “Are you saying you have never sinned?”

He slowly nodded his head without taking his eyes off me or changing his facial expression.

“Well, with all due respect, I don’t believe you.”

Nothing. No reaction. No change in posture or expression. He just stared.

When I finished preaching, I was almost immediately engaged by a young, very personable adherent to the Orthodox faith. The man in black had drawn closer and was standing behind me, talking to a student. I could tell he wanted to talk to me. Meanwhile, Keith sat down between me and the man and engaged the man in conversation. When I finished my conversation, I turned around to listen to Keith’s conversation with the man. The conversation revolved around the man’s insistence that he was perfectly righteous and his insistence that Jesus was not God.

I had to leave before Keith finished his conversation with the man. But Keith would later tell me that he wondered if the man was a demoniac.

Keith and I enjoyed a good day of fellowship and side-by-side gospel ministry. Please pray for those who heard the gospel–either through our preaching, the conversations we enjoyed, and/or the Gospel of John they received.

I met Bentley and his grandfather Steve while fishing at Pride Lake, in Scott County Park. This is the story of God's gracious providence. A three-Fold Purpose For me, there is a three-fold purpose … END_OF_DOCUMENT_TOKEN_TO_BE_REPLACED