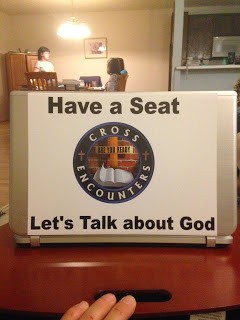 I spend a lot of my writing and study time at Starbucks. I’m one of those rather strange fellows who writes and thinks better in the midst of white noise–music, conversation, and the sounds of coffee grinders and scooped ice.

One-day, while sitting at one of the water spot-stained wood tables, I thought, “What can I do to make my time in Starbucks more evangelistic?” I looked at my opened laptop and thought, “I have a empty billboard on the back of my laptop computer screen.”

Lots of people work in Starbucks. Lots of people use their laptops in Starbucks. Sometimes, those laptops are adorned with stickers of various kinds–political, musical, philosophical, personal. So, I decided to have Richard Story, the manager of Cross Encounters Ministries, figure out a way for me to use my laptop lid to try to draw people into conversation, without being an overt distraction and getting myself kicked out of my Iced-Coffee-With-Vanilla-And-Extra-2%-Milk office. The result: the laptop lid decal you see in the image.

The other day, shortly before I had planned to leave Starbucks, a man in his 50’s walked by my table, stopped, looked at my computer lid, pointed, and said, “Interesting. Nice idea.”

“So, which God would we talk about?”

“The one who created you and me. There is only one God.”

“Sir, the only reason you would believe otherwise is because you are suppressing the truth you know about God, by your unrighteousness.”

“That’s right.” The man said with a smile. He sat down in the chair across the table from me and pointed at my laptop lid. “Close that. Let’s talk.”

For the next 90 minutes, the man (we’ll call Bob), a professing Christian who attended a nearby mega-church, poured his heart out to me. He was a very troubled man.

Bob related to me the tragic story of his two-year-old daughter who died of leukemia, almost 20 years ago. His eyes grew watery with tears, but not a single tear fell on his cheek.

Bob then shared incredible stories of visions, dreams, the ability to touch a person and know everything about them, a short and failed run for the governorship, and being a 19-year-old tapped by Nancy Reagan herself to serve as Ronald Reagan’s personal bodyguard whenever he was in California.

I listened quietly with an occasional nod of the head (I would have been hard-pressed to get a word in edgewise, anyway), as Bob unwittingly, verbally crafted a strong case for his mental instability. In my roles as a deputy sheriff and a minister of the gospel, I’ve had contact with many people like Bob. As Bob talked I prayed, asking the Lord for more wisdom and discernment than I knew I had at the moment.

At what seemed like an appropriate time, I asked, “Bob, have you grieved the loss of your daughter.”

His lower lip quivered. His eyes once again filled with tears. He bowed his head and softly said, “No.”

I have quite a bit of counseling experience. Eight years as a law enforcement chaplain and my fifteen years in ministry have given me ample opportunities. I am a proponent of Nouthetic Counseling, otherwise referred to as Biblical Counseling. One of the basic tenets of Nouthetic Counseling is that most of the emotional/psychological problems people experience are the direct result of sin in their lives (James 1:13-15). I believe this is true. It has been true in my own life and in the lives of many people I’ve tried to help.

However, I also believe the brain is an organ of the body. And just like one’s heart, lungs, liver, pancreas, knees, and hips, I believe a person’s brain can break, malfunction, or become diseased. Again, I must qualify the previous statement by asserting that much of what is called “mental illness” these days is nothing more than a heart and mind twisted by the depravity of man, a hatred of God, and a love of sin and self.

Bob, the man sitting across from me at the table in Starbucks, was a troubled man. He was, in my estimation, delusional–but not a danger to himself or others. He was a brokenhearted man–maybe broken in more ways than one–who had yet to come to terms with his daughter’s death.

“Bob, what question do you have for me?” I asked.

“Do you believe everything I’ve told you?” According to Bob, other pastors had called him crazy.

“I can’t affirm or deny your experiences. I have no reason to believe you’re trying to deceive me. But this I know. God speaks to His people through His Word. Anything we experience that is contrary to His Word is not from Him. Do you read the Bible?”

“Bob, if your wife wrote you 66 love letters and gave them to you, and later asked you if you had read them, and you said, ‘No. I love you, but I’m just not interested in what you wrote to me,’ would your wife believe that you love her?”

“Then why should Jesus believe you love Him if you are unwilling to read His Word?”

By now, my phone had rang a couple times. Amanda was waiting for me to pick her up from work. I let Amanda know I would be late because I was in a conversation at Starbucks. Amanda knew exactly what that meant. So, she arranged for Mahria to pick her up at work. My wife and daughters are patient participants in my ministry, through the many different ways they support me and my gospel work.

Bob and I talked for a while longer. As Bob got up to leave, he thanked me for the conversation.

Bob said he would do that, shook my hand, and walked out the door.

My time with Bob was far from a “typical” evangelistic conversation. I didn’t fully articulate the law and the gospel to him. I spent far more time listening than talking–interjecting only when it seemed appropriate. Bob is a man who has yet to grieve the tragic loss of his little girl–one of his six children. To what extent that life-altering trauma emotionally and psychologically scarred him, only God knows.

I left Starbucks both sorrowful and thankful–sorrowful that Bob was so troubled, and thankful that the Lord allowed me the opportunity to talk to him. While I only planted a seed here and there, I’m hopeful God will allow them to take root, grow, and produce fruit in Bob’s life.

Today is Thanksgiving. Bob remains on my heart and mind. As you thank the Lord, today, for His provision, kindness, goodness, faithfulness, and love, please remember Bob in your prayers.

One conversation with Kim resulted in another conversation with another Kim. Confused? Allow me to explain. Kim at the Corner of Harrison and Locust A little more than a week ago, I met a man named … END_OF_DOCUMENT_TOKEN_TO_BE_REPLACED