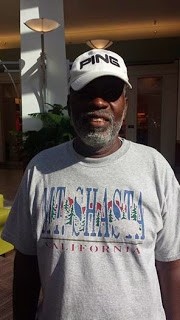 Larry is 61-years-old, married with four adult children, and he has four grandchildren–ages 8 to 22. Larry is retired after a 35-year career as the CEO of a non-profit organization that specialized in providing care and support for seniors and people with disabilities. Originally from New Orleans, Larry was raised in the religious framework of Roman Catholicism, but he left Romanism for membership in a Baptist Church. Today he is a member of a non-denominational church. He moved to Redding, CA, after he married his wife. When it comes to shopping, like me, Larry prefers to wait outside the mall stores and relax on a bench, while the ladies shop.

During my conversation with Larry, I shared the law of God and the glorious gospel of Jesus Christ with him. This was the main reason why I talked to Larry on the phone. My primary purpose for engaging Larry, a stranger, in conversation was not to develop a relationship with him, although I’m glad that happened.

Of course, admitting this will immediately draw the ire of some Christians who, having grown up in American Evangelicalism, have been taught that the development of a relationship with a person must happen before any attempt is made to communicate the gospel to that person. To do otherwise is tantamount to “shoving Jesus down the person’s throat” (quite a blasphemous utterance, by the way). These same Christians have been taught that no one will care about what we as Christians have to say until people see that we care. This particular American Evangelical doctrine denies both the love and power of the communicated gospel (Romans 1:16; 10:14-17).

American Evangelicals have been taught that developing relationships with people is more loving than simply sharing the gospel with them. American Evangelicals have been taught that the gospel is just too simple while, at the same time, too difficult to understand outside the confines of a well-developed relationship. These are not straw man arguments I am proffering. These are arguments I hear from American Evangelicals quite frequently in churches, on the streets, and on social media sites. These American Evangelical doctrines, which are nothing more than traditions developed over the last 150 years, have no support in Scripture. None. But many Christians believe these traditions are biblical because that’s what they’ve been told by well-meaning pastors, authors, and conference speakers.

Larry professed to be a follower of Jesus Christ. While he said things that were contrary to biblical Christianity, he also affirmed everything I shared with him regarding salvation by the grace of God alone, through faith alone, in Jesus Christ alone. Larry left me on the fence regarding the state of his soul. Fortunately for Larry, I am neither the Lawgiver nor the Judge; I am not the One who can both save and destroy. That is Christ, and Christ alone.

If you would like, you can listen to my conversation with Larry. It took place during the second hour of yesterday’s edition of Cross Encounters Radio.

Today I was blessed with the opportunity of preaching the chapel message at Unity Christian School, in Fulton, IL. The invitation came through the school's choir director, Paul Hopkins. My … END_OF_DOCUMENT_TOKEN_TO_BE_REPLACED