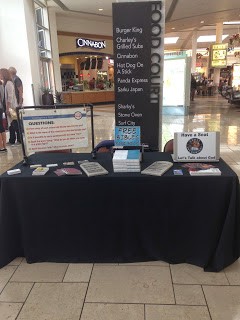 I spent a few hours at the Valencia Town Center this afternoon manning an evangelism table. I added a few more accoutrements to the table in an effort to make it a little more visually appealing.

Having cast my lines into the water, it didn’t take long before the fish started biting.

The first two tracts I distributed went to a couple of boys. They looked like they were 10-12 years old. One of the boys was carrying a Titled Kilt waitress calendar. Titled Kilt is one of those restaurants men go to for big screen televisions and the half-naked waitresses. The restaurants billboards and bus stop advertisements are of the kind to which Christians should avert their eyes.

Some Christians feel it’s inappropriate to give a child a gospel tract, which refers to the 7th Commandment (adultery). I’ve been told of situations in which unsaved parents, after reading a tract their child has received, have angrily returned the tract, incensed that their child was exposed to the words “lust” and/or “adultery.” While I’m sure it’s not always the case, but I would not be surprised if some of these offended parents are the same parents who drop their children off for hours of unsupervised fun at the mall where their sons can buy inappropriate calendars.

Not far from today’s table location was a watch and jewelry repair kiosk. A noticed that a young man working the kiosk was sporting a United States Marine Corps (USMC) sweatshirt. I always keep some “Thank You” tracts in my wallet for just such an occasion. I walked over to the kiosk, extended my hand to the young man, and thank him for his service. He smiled and said, “Thank you, sir. I appreciate that.” I gave him the tract and headed back to my table. When I sat down, I looked his way to see him attentively reading the tract.

I gave away six bibles today. Two were to individuals, including one to the manager of the mall’s Hickory Farms outlet. The other four went to one family. A mom with her three children (ages 8-13) in tow approached the table. I had a sign up today to make sure people knew the bibles were free for the taking. Mom told one of her daughters and her son to take one. The kids then asked mom if they could take one for their dad and one for their grandpa to give to them as Christmas presents. A smile brightened mom’s face and she gave her hearty approval.

I think I was probably smiling ear-to-ear, too, at the thought of bibles leaving my table to be given as Christmas presents next week.

I was further blessed today as a few Christians, at different times, stopped at the table to thank me for being at the mall.

It was another good afternoon at the mall.

I met Bentley and his grandfather Steve while fishing at Pride Lake, in Scott County Park. This is the story of God's gracious providence. A three-Fold Purpose For me, there is a three-fold purpose … END_OF_DOCUMENT_TOKEN_TO_BE_REPLACED