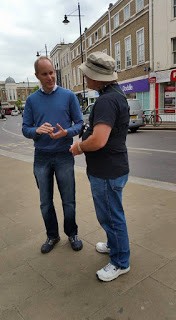 While distributing gospel tracts on Wimbledon Hill Road, in Wimbledon, England, I handed a gospel tract to a man named Martin. When Martin received the tract, he asked what it was. When I explained to Martin that it was a message about Jesus Christ, Martin asserted he was an atheist. What followed was a 15-minute conversation during which Martin acknowledged he had to draw from the Christian worldview to assert any basis for morality and that his godless worldview provided know basis for a morality that was anything more than the arbitrary opinions of people. During the conversation, Martin conceded that his worldview could not give an account for knowledge, logic, or purpose for human existence. Martin lives by faith, but sadly it is faith in meaninglessness.

Martin was on his lunch break. He left, not in a huff, but simply due to a lack of time. While I did not get to communicate the gospel with Martin, the paper missionary I gave him went with him as he walked away.

Listen now to my conversation with Martin.

I met Bentley and his grandfather Steve while fishing at Pride Lake, in Scott County Park. This is the story of God's gracious providence. A three-Fold Purpose For me, there is a three-fold purpose … END_OF_DOCUMENT_TOKEN_TO_BE_REPLACED