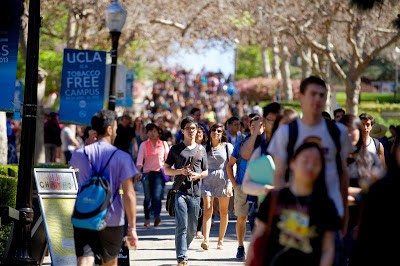 Yesterday, while I was standing on Bruin Walk (UCLA) handing out tracts and holding my “Stop and Talk” cross, a student named Owen approached me and asked what I was handing out. That was the beginning of one of the most remarkable conversations I have ever had with an unbeliever.

Owen was raised in a Christian home. According to Owen, to this day his entire family are Christians. Owen was a “Christian,” too, until the age of 18. That is when he learned about theodicy, the study of the problem of evil.

For almost an hour, Owen and I talked about theodicy, logic, the law, and the gospel. Owen is one of the most honest unbelievers with whom I have spoken. Unlike many professing atheists, agnostics, and skeptics (Romans 1:18 makes it clear none of these categories of people really exist. There are no atheists, agnostics, or skeptics according to God’s Word.), Owen didn’t cling to the ridiculous and fallacious arguments so many professing unbelievers cling to. It was refreshing.

However, Owen was honest, only up to a point. Owen tried to cling to his assertion that the reason he no longer believes in Jesus is because of the problem with evil. But by the end of the conversation, Owen realized that was not his real problem.

As I spent time reflecting on my conversation with Owen, I found myself thanking God for my friend, Sye Ten Bruggencate. I am indebted to Sye. What I have learned from him regarding presuppositional apologetics is, in part, what allowed me to have the conversation I had with Owen. All credit and glory goes to God, of course, but Sye’s help has been invaluable to me.

Today I was blessed with the opportunity of preaching the chapel message at Unity Christian School, in Fulton, IL. The invitation came through the school's choir director, Paul Hopkins. My … END_OF_DOCUMENT_TOKEN_TO_BE_REPLACED