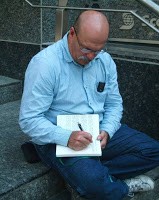 “There is no faithfulness or steadfast love, and no knowledge of God in the land…” (Hosea 4).

Father, the other night on Stephen Avenue, in downtown Calgary, I was struck yet again with the mind-numbing ignorance manifested in those who are in wanton rebellion against You. Both Canada and the United States are being destroyed for a lack of knowledge. Both countries play the whore with the wisdom of the world, while assuming their self-asserted ignorance of You, Lord, is evidence of intellectual superiority. Two nations professing to be wise have become fools, having forgotten Your law.

As was the case with Israel, Father, so is the case with Canada and the United States. The more North America grows, the more the continent sins against You, Lord. You have changed the glory of these two once-great nations into shame. Father, I fear for North America. I believe that as You did with ancient Israel, You will punish and are already punishing Canada and the United States for their sinful ways. You are punishing and will punish the nations in a far more painful way. You will repay both nations for their wicked deeds.

O Father, both Canada and America are playing the whore. They are committing adultery and every form of sexual immorality. The people inquire of and bow before the false and idolatrous gods of homosexuality, abortion, wealth, distorted science, and a worldview made of the dead and rotting wood of absurdity. Father, please save these countries. Bring them to repentance and faith in Your Son, Jesus Christ. While both nations deserve to be utterly destroyed in a manner that was fit for Sodom and Gomorrah, I pray You will spare them–not because of their goodness and greatness (neither nation has any), but because of Your great mercy.

A strong and demonic wind has wrapped Canada and the United States in its gusts of evil. Only You, Father, can change the direction of these two nations. May the wind of the Holy Spirit blow mightily across these nations. Bring the peoples to understand their shame for their false sacrifices to false gods, and then bring them to genuine, God-given repentance.

Father, while I pray for North America’s repentance and faith in Jesus Christ, Your Son, I believe as Israel killed her prophets, North America will one-day soon begin to kill her heralds–men of God preaching the gospel on the streets and calling people on their sin, and calling them to repent and believe the gospel. O Lord my God, please give Your heralds more courage, more perseverance, more love for You and the lost, and greater determination to die to self in anticipation of and preparation for the persecution looming just over North America’s horizons. Canada and the United States will not take kindly to the exposing of their collective whoredom, in the face of the truth of Your Word. But exposed the whoredom must be!

Please, Father, cause North America to turn her eyes upon Jesus, to look full in His wonderful face, so that the things of earth–that which facilitates the wanton, debaucherous, rebellion of both nations–will grow strangely dim, in the light of Your glory and grace. In Jesus’ name, I pray. Amen.

I met Bentley and his grandfather Steve while fishing at Pride Lake, in Scott County Park. This is the story of God's gracious providence. A three-Fold Purpose For me, there is a three-fold purpose … END_OF_DOCUMENT_TOKEN_TO_BE_REPLACED