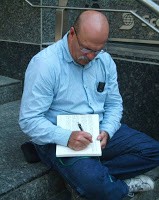 “When he opened the fifth seal, I saw under the altar the souls of those who had been slain for the word of God and for the witness they had borne. They cried out with a loud voice, ‘O Sovereign Lord, holy and true, how long before you will judge and avenge our blood on those who dwell on the earth?’ Then they were each given a white robe and told to rest a little longer, until the number of their fellow servants [slaves] and their brothers should be complete, who were to be killed as they themselves had been” (Revelation 6:9-11).

O Sovereign Lord, determiner of all things, slow to anger and full of lovingkindess; You are great. You alone are awesome. You are holy, righteous, and just. Vengeance is Yours alone; You will repay.

Father, as You know, as You are perfectly aware for You are allowing it to happen (You are good); the blood of Your martyrs is crying out to You from the dirt, the sand, the dry and parched ground of Iraq. Father, Your people, and those who are not Your people but count themselves among Your people, are being brutally butchered by Muslims–blasphemers of Your great and holy name and the name of Your Son, Jesus Christ.

The barbaric, systematic slaughter of Your people, Christians (who alone are Your people), is a natural byproduct of the demonic religion of Islam. True converts to Islam, those who adhere to the scriptures of Satan, the Qur’an, are the ones who are murdering Your people. They are acting according to their depraved, sinful nature. They hate You, Lord Jesus. They are utterly void of Your presence, Holy Spirit. They are of their father the devil and not adopted members of Your family, heavenly Father.

Father, the heads of Your people, young and old, are literally rolling down the streets of Iraq. How long, O Lord, before You avenge the blood of Your saints, Your martyrs? Dear Father in heaven, when will You avenge their blood on the Islamic world that dwells on earth? And how many more of Your people will be martyred before You judge the guilty and avenge those You have made righteous through the blood of Your Son, the God-Man, Jesus the Messiah?

Father, You know my heart far better than I do. I ask these questions as an inquisitive child, not as an interrogator. You owe no one, least of all me, an explanation for what You do and how You do it. You alone are sovereign. You alone are King. I come before You, Lord, brokenhearted, not angry with my Father.

Oh, I am angry with the butchers, but I am not angry with You, Father. May I never be angry with You! Father, bring the Muslims engaged in the slaughter of Your people to repentance and faith in Jesus Christ. If not, Father, crush them before they murder another Christian–whether truly saved or false convert.

Lord, please help me to remember who I was and from where I came. But for Your sovereign grace, I would be no better off than the murdering Muslim, or the Muslim who foolishly believes his is a religion of peace; or the atheist, or the Mormon, Roman Catholic, Jehovah’s Witness, or the follower of any other false religion. But for Your sovereign grace and mercy, Lord Jesus, I too would be lost. Thank You for saving me, in spite of who I was. Thank you for keeping me, in spite of who I am.

Father, how many more white robes will You issue to martyrs in Iraq and other parts of the world? And when will You begin to issue martyr’s robes to Christians in the United States?

Father, You know Your Son’s Bride in America is not ready for the persecution that is sure to come upon her. She says she will stand firm in the face of persecution. She says she will not deny You if pressed to do so. But when the vast majority of Christians lack the love for You and the lost it takes to placed a gospel tract on a car window or in someone’s hand, will they really have the love for You and for the lost, and the courage to stand firm in the face of an Islamic, demon-possessed, Muhammadan, murderer holding swords to their children’s neck?

Heavenly Father, please strengthen my Christian brethren in Iraq and wherever else my brethren are being persecuted, today. Help them to endure the persecution You are allowing. Help them to count it all joy to suffer for Your name. Lord, the world–this vicious God-hating world–is unworthy of Your martyrs. Unlike Satan’s martyrs–Islamic murderers–Your martyrs die so that others might live. Satan’s martyrs kill so they can be rewarded by their false god (the Allah of Islam) who can neither reward them, nor save them.

And again, Lord, I ask You to save the persecutors of Your people. Bring them out of the darkness of the false religion of Islam, or any other false religion (like atheism), and bring them into the marvelous light of Your Son, Jesus Christ, who is more than a prophet. He is the King of kings and the Lord of lords; the One who created Muhammad and before whom Muhammad will stand to give an account for the creation of his false and blasphemous religion. Bring Muslims, every Muslim I pray, to the light of salvation and forgiveness by Your grace alone, through faith alone, in Jesus Christ alone, while those in white robes rest a little longer.

This I pray in the name that is above every name, the name of the one before whom every Muslim knee will bow and every Muslim tongue will confess as Lord; the God-Man, the Messiah, the Caller of every true prophet (among whom Muhammad finds no place) to whom He gives true words of justice, forgiveness, wrath, and grace; in the name of the only wise God who will judge every false prophet like Muhammad with eternal judgment and unquenchable fire, and who will likewise save and bring to repentance and faith in Him those who humble themselves and receive Him as Lord and Savior; yes, this I pray in the name of Jesus Christ the Lord. Amen.

Today I was blessed with the opportunity of preaching the chapel message at Unity Christian School, in Fulton, IL. The invitation came through the school's choir director, Paul Hopkins. My … END_OF_DOCUMENT_TOKEN_TO_BE_REPLACED