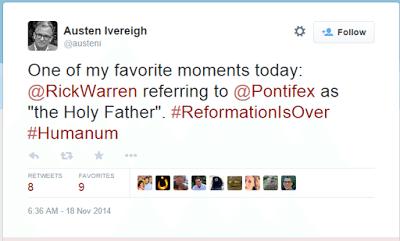 Rick Warren spoke in Rome, today. He is one of the featured guests at a conference called “An International Interreligious Colloquium on The Complementarity of Man and Woman.” The host: Pope Francis, leader of the apostate Roman Catholic Church.

Austen Ivereigh, a London-based Roman Catholic journalist, is at the conference. Ivereigh tweeted (see above image) that one of his favorite moments of the day came when Rick Warren referred to Pope Francis as “the Holy Father.”

“Do you not see that whatever goes into the mouth passes into the stomach and is expelled? But what comes out of the mouth proceeds from the heart, and this defiles a person. For out of the heart come evil thoughts, murder, adultery, sexual immorality, theft, false witness, slander. 20 These are what defile a person. But to eat with unwashed hands does not defile anyone” (Matthew 15:17-20).

Out of the abundance of his heart, Rick Warren spoke when he referred to the religious leader as “the Holy Father.” And it’s not the first time he has spoken so lovingly about the leader of a false religion leading a billion people to hell.

“And call no man your father on earth, for you have one Father, who is in heaven” (Matthew 23:9).

Jesus, of course, was referring to spiritual or religious leaders. He was not referring to how one should or should not refer to one’s biological father. Only God the Father–only the one and only Triune God–deserves such reverential reference and adoration.

Rick Warren is a “poster child” for so much that is wrong in the unbiblical, non-Christian system known as “American Evangelicalism.” I fear for his soul.

As I tweeted shortly before writing this brief article, so I say, here. There is no reason for any soundly saved Christian to believe Rick Warren is a brother in Christ. Pray for his salvation.

I met Bentley and his grandfather Steve while fishing at Pride Lake, in Scott County Park. This is the story of God's gracious providence. A three-Fold Purpose For me, there is a three-fold purpose … END_OF_DOCUMENT_TOKEN_TO_BE_REPLACED