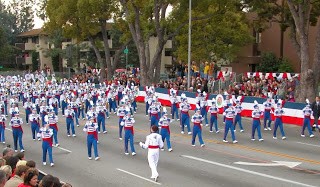 On what is forecasted to be a gorgeous New Year’s Day morning in warm and sunny Southern California, millions of people will gather on the streets of Pasadena and around their televisions for the 125th annual Tournament of Roses Parade. Elaborate floats, marching bands, and equestrian teams will slowly make their way down the parade route. Having seen the parade in person, and having watched it many times on television, the Rose Parade is a beautiful display of the God-given creativity of mankind, using God’s beautifully created flora to make massive, mobile works of art.

Sadly, this year it will all change. The last petal of the rose will fall on New Year’s Day, 2014. The beauty of every float, the talent of every marching band, the grandeur of every equestrian team will be marred by the shameless flaunting of man’s most prolific talent: the outward expression of the inherent love of sin and hatred of God.

I was disappointed but not surprised when I read the following in a Los Angeles Times online article:

Danny Leclair snapped a photo of two toy grooms holding hands. He then sent the photo via email to his longtime partner, Aubrey Loots, with a question:

“Do you want to get married on a Rose Parade float?”

Loots agreed, and on New Year’s Day the Los Angeles couple will become real-life wedding cake toppers when they say “I do” on a cake-shaped float in the 125th Tournament of Roses Parade.

The AIDS Healthcare Foundation’s float, “Living the Dream: Love Is the Best Protection,” was created to celebrate victories in 2013 for gay marriage advocates, including Supreme Court decisions upholding the repeal of California’s Proposition 8 and striking down a key part of the Defense of Marriage Act.

Foundation spokesman Ged Kenslea said the organization supports legally sanctioning same-sex marriage because it encourages more stable relationships among gay men as well as behavior that will prevent the spread of HIV.

“We believe that marriage saves lives,” he said.

People have contact the Tournament of Roses to voice their displeasure about the upcoming public defilement of marriage as two men are joined in unholy matrimony atop of a wedding cake made of roses and other flowers. A Facebook page has been dedicated to boycotting the Rose Parade. While recent history has shown us that some boycotts work, in the end, they are not the answer to righting social wrongs.

This is not to say that Christians shouldn’t involve themselves in boycotts. I have initiated and participated in a few. However, boycotts are merely band-aids on mortal wounds. Boycotts tackle the symptoms of a disease, but all-too-often ignore the disease’s pathology.

What leads two men to stand atop a rose-covered cake and profane the institution of marriage in front of millions of people is not love for each other; for they know not true love. Rather it is lust and the willful succumbing to their debased minds. What leads the Tournament of Roses Parade to allow such a depraved and blasphemous display is not anything noble. The Tournament of Roses Parade’s sanctioning of such an abase, public display is indeed tolerance, but it is not tolerance in a positive sense. It is tolerance in the sense of accepting that which is evil and calling it good (Isaiah 5:20).

Jesus Christ as Lord. He is the Alpha and Omega, the first and the last, the beginning and the end. He was with the Father in and at Creation. All things–all things—were created by Him, and through Him, and for Him. Nothing has ever been made that was not made by Jesus Christ. He is the sinless Lamb of God who came to take away the sins of the world. He is also the Lion of the Tribe of Judah who will judge both the living and the dead. He is King of kings and Lord of Lords. He is sovereign over all things. He owns every person, just as He owns the cattle on a thousand hills, and it matters not if, at present, the person is in wanton rebellion against Jesus Christ or one of His born-again, beloved children. Jesus owns it all. Jesus owns us all. God is. God is one. God is Three in One—Father, Son, and Holy Spirit—One God in Three Persons—the Triune One—the Trinity—God. And this God, for there is only one God, is the God before whom every person will one-day stand to give an account for their lives. Because God alone is truly and perfectly good, He will judge each person according to the perfect moral standard He has written on every human heart.

Everyone knows it is wrong to take the name of the Lord their God in vain, to bring his name down low and use it as an adjectival term of excitement, anger, sorrow, or fear, because they know God is Holy.

For the above reasons, and others, everyone who stands before God to give an account will do so without excuse. No one will be able to claim innocence or ignorance of violating God’s law–whether in thought, word, or deed. Because God is good, because He is holy, righteous and just, He must punish sin. The punishment God has ascribed for sin, all sin, is eternity in Hell. It matters not whether you, the reader, believe this. What matters is that it is true. Truth is not determined by what one believes. God is truth, though every person is found to be a liar. Truth is that which comports to reality, and any attempt to live life apart from the reality of God is to live a life of chaos, absurdity, arrogant denial, and sin.

This same God–again, for there is only one God–who is angry with the wicked every day, whose wrath abides upon the ungodly, who will judge the world in righteousness, is the same God who is loving, merciful, gracious, and kind. And He showed His great love for mankind when He sent His Son to earth in the Person of Jesus Christ—fully God and fully Man, yet without sin.

Jesus of Nazareth, born of a virgin just as the prophet Isaiah declared more than 700 years before Jesus’s literal, physical birth, lived the perfect, sinless life you cannot live. For some 33 years, Jesus lived a life in perfect obedience to the law of God–in thought, word, and deed–a life you and I could not hope to live for a mere 33 seconds. And then He voluntarily went to the cross.

Yes, it was the Jewish people who hatefully and viciously demanded Jesus’s execution. Yes, it was the Roman government that carried out the despicable act. But they were all merely instruments in the hands of another. For it pleased God the Father to crush God the Son under the full weight and fury of His wrath against sin. God the Father made God the Son, who knew no sin, to become sin on behalf of those who repent and believe the gospel so that through the sacrifice of His Son many would be made righteous in the eyes of Almighty God. In other words, on that great and terrible day God the Father looked upon God the Son as if He had lived the depraved life of a sinner and in exchange–a great exchange–God the Father looks upon those whom He has caused to be born again, to repent and believe the gospel, as if they had lived His Son’s perfect, precious, and priceless life.

Jesus shed His innocent blood on the cross. He died a literal, physical death on the cross. And He was buried in a tomb not His own. Three days later, Jesus forever defeated sin and death when He physically, bodily rose from the grave. And unlike every false god created in the imaginations of men–whether the false gods of Islam, Catholicism, Mormonism, Hinduism, Jehovah’s Witnesses, Oprah-ism, or Atheism (a religion like every other spiritual “ism”)–Jesus Christ is alive today and He will return at a time of the Father’s choosing.

What God commands of you, the reader, is the same thing He commands of me and all people everywhere, and that’s that you repent. Turn from your sin and turn toward God–and by faith alone receive Jesus Christ as your Lord and Savior. You must come to God on His terms. God does not negotiate with sinners. God will not be bribed by your religious practices or what you may perceive as “good works” acceptable to God. God will not weigh your “good” against your “bad,” for God does not see you or anyone else as good–good in keeping with His standard of moral perfection. All have sinned and fallen short of the glory of God.

If you do not read the gospel of Jesus Christ and see it for what it is, good news, it is because you love your sin more than you love God. It is because you love yourself more than you love God. It is because the love of God and the Truth of His Word is not in you. But if God causes you to be born again and extends to you the gifts of repentance and faith, which only He can give, then He will take your heart of stone and give you a heart of flesh. You will begin to love the things God loves and hate the things God hates. You will stop presuming upon God’s forgiveness as if it is something you have earned or deserved. Instead, you will have the confident assurance He has forgiven you–not on the basis of any deeds you have done in righteousness, but based entirely upon God’s mercy, grace, and love.

And why would God allow His one and only Son to die a sinner’s death He did not deserve in order to take upon Himself the punishment sinners rightly deserve for their sins against God, so that sinners could be forgiven and saved? “For God so loved the world, that he gave his only Son, that whoever believes in him should not perish but have eternal life” (John 3:16).

Please repent and receive Jesus Christ as your Lord and Savior, while God has given you time.

Questions and comments regarding this and/or any other article on this blog can be sent to: [email protected]

I met Bentley and his grandfather Steve while fishing at Pride Lake, in Scott County Park. This is the story of God's gracious providence. A three-Fold Purpose For me, there is a three-fold purpose … END_OF_DOCUMENT_TOKEN_TO_BE_REPLACED