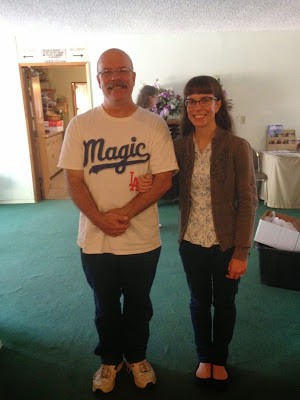 In 22 hours, I will walk my daughter, Marrisa Lynn, down the aisle. I will then lift her veil, say something to her (I don’t know what), kiss her on the cheek, and then place her hand into the hand of one Brian David Thompson–the man who will be her husband and my son-in-law.

This morning, we gathered at the church. My sister Cheryl and my niece Allison, along with Mahria, Michelle, and Amanda, decorated the church. It’s beautiful.

As we were getting ready to leave, I decided Marissa and I should practice our walk down the aisle. The wedding rehearsal is this evening, and there will be plenty of practice, then. But I couldn’t wait that long. I had to begin the process of giving my little girl away. I had to see what it is going to feel like, or might feel like (I won’t know for sure until tomorrow morning), to walk my precious daughter down the aisle.

We joked (or should I say I joked). I scooped her off her feet to carry her down the aisle. I joked as I practiced my parade wave down the aisle, thanking the Queen of England for attending and asking the ushers to remove Barack Obama for crashing the party. Everyone laughed. It was all I could do to keep from hyperventilating and crying like a baby.

Marissa is my middle daughter and the first to be wed. Did I mention that Marissa is my “middle” daughter? Marissa has the dubious distinction in the family of being most like her father. She is strong-willed, out-spoken, determined, hard-working, tenacious, not easily swayed. She speaks with global terminology–words like: every, everyone, all, always, all the time. You get the idea.

But she has these eyes–these big, expressive, beautiful, deep, penetrating brown eyes. I remember the moment she was born and I first got to hold her close. “Look at those eyes!” I thought. I was captivated by her eyes. She has the eyes of a Precious Moments figurine or drawing. She had me wrapped around her finger, with her first glance upward, from her cradle in my arms.

As a baby, Marissa was not one to like to be held close, yet she has always wrapped herself in a tight, blanket cocoon when she sleeps. But when she did feel like snuggling, she would bury herself deep into my chest and arms. It was as if she couldn’t get close enough to me. Oh, how I cherished those moments.

I’ll share just one memory of a special moment with Marissa.

When Marissa was just a little girl, maybe seven-years-old, we went fishing at a local lake. It was the middle of the summer. It was later in the morning, so I didn’t expect the stock trout to be biting. I had a pole set up for Marissa. We weren’t there more than a few minutes when Marissa’s rod tip started bouncing up and down as if a tightrope walker was doing tricks while walking on the line.

Marissa, with some help from her dad, landed the fish. It was a beautiful and “BIG” rainbow trout. As the fish flopped around on the shore, Marissa bent down to take a closer look. And with the cutest, squeaky voice she said, “I’m going to name you Freddy.”

“Oh, no!” I thought. “She’s already bonded with her first fish! Now, what am I going to do?” Even during those early years, once Marissa had made up her mind about something, it was next to impossible to get her to budge. Did I mention that Marissa is a lot like her dad?

I looked at my elated, brown-eyed beauty; then I looked at the trout that was already showing signs of an ever-shrinking lifespan. “Freddy” had swallowed the bait and hook. The weapon of choice was deep in his gut. “Freddy” was not long for this world.

“Umm. Honey? You’re not going to be able to keep Freddy.” He’s hurt. We’re going to take him home and, well, he’s gonna be someone’s dinner.”

Well, that went over like a lead balloon. She looked at me as if I was “Gru” from the first “Despicable Me” movie and I just made her a balloon toy and popped it with a pin. And then she started to cry. Crocodile tears flowed from those gorgeous, expressive, now very sad brown eyes.

I had to think fast. I had to do something to salvage what should be a wonderfully memorable moment for dad and daughter.

“Hey!” I quickly shifted into homeschool dad mode. “Have you ever seen the inside of a rainbow trout?”

“No.” she replied, with her “boo-boo” face in full operation.

“How about we go home and we take a look inside Freddy?”

Those big brown eyes began to twinkle. Sentimentality was immediately placed with a look of fascination and inquiry.

Whew. So much for Freddy becoming a pet floating on its side, in a bucket, on our patio.

With Freddy in tow, now relegated to a science experiment, Marissa and I headed home. On the way, Marissa could not stop talking (and she hasn’t really stopped since). Her mind and her mouth were filled with “I wonder…..” statements. “I wonder what he looks like inside.” “I wonder if he’s a boy or girl.” I wonder…..”

We prepped the kitchen sink and Freddy for surgery. “Can I cut him open?” Marissa asked.

“Umm. I think dad should do it, honey. This fishing knife is very sharp. And Freddy has some sharp bones inside.”

Taking on the role of a science teacher, I explained to Marissa what I was doing. I told her that Freddy was going to bleed. “I wanna see! I wanna see!”

I opened Freddy to discover that he…..was a she. I suggested changing the fish’s name to Freda, but Marissa wouldn’t have any of it. There would be no name change for this dead trout. I showed Marissa how I knew Freddy was a female fishy. Freddy was filled with hundreds of little yellow fish eggs. Marissa thought that was really cool.

I opened Freddy’s stomach and discovered far more than I expected. In addition to our brightly colored floating bait, Freddy had recently consumed a large, rubber bass lure. The lure was in the shape of a crawdad. I removed the lure from Freddy’s stomach and showed it to Marissa.

As far as I know, Marissa still has that weird little keepsake, almost 20 years later.

21.5 hours until I walk Marissa down the aisle.

I keep telling myself that it’s going to hit me on Sunday that my little girl is now another man’s primary responsibility. Frankly, the closer we get to the wedding, the more I think I’m not going to make it to Sunday. It’s hitting me, now.

I’ve made so many mistakes raising my three daughters–all three now adults. And I probably made the most mistakes with Marissa. So, with the excitement and anticipation and joy I feel about tomorrow, there is also a sense of mourning–mourning my sin, my failures, my missed opportunities, my blown opportunities. While I know I’m not losing my daughter, I find myself mourning my little girl no longer being under my roof.

I hope no one, here, in Starbucks, can see me crying.

Marissa is marrying a good, young man man–the man who, for many years, Mahria and I hoped she would marry. Brian’s love for Marissa is most evident in the way he seeks to protect and nurture her. I cannot think of a more worthy man into whose care I could place Marissa. And he fully understands it is no small honor and privilege to receive my daughter’s hand–not because of who her father is, but because of how special Marissa is.

Brian’s parents, David and Kristine, did a wonderful job raising Brian–raising him in the nurture and admonition of the Lord. We couldn’t ask for a better son-in-law. Mahria and I will only refer to him as our “son-in-law” when introducing him to someone who doesn’t know him. To us, he is a son.

In just a few hours, the wedding rehearsal will begin. I will again practice walking Marissa down the aisle. I will probably try again to keep things light, as much for myself as for Marissa.

I miss her already. I want her to go and start her new life, and I never want her to leave.

Today I was blessed with the opportunity of preaching the chapel message at Unity Christian School, in Fulton, IL. The invitation came through the school's choir director, Paul Hopkins. My … END_OF_DOCUMENT_TOKEN_TO_BE_REPLACED