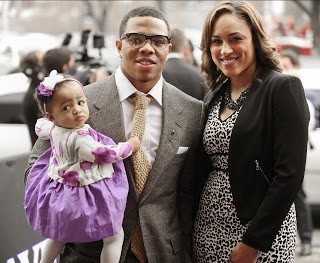 Who is Ray Rice?

Early in 2014 Ray Rice was videotaped striking his fiancée, Janay, in an elevator. After the doors opened, he dragged her off the elevator. The police saw it, arrested him and charged him. Apparently he spit on her as well.

Shortly thereafter, she married him. They also share a child together. Recently, the video was released publicly and everyone in the world was able to watch the events. A new public outrage ensued as the result of the video evidence. Ray Rice’s already criticized two-game suspension became more of a travesty than most people already felt it was. Ultimately, the NFL suspended him indefinitely and the Ravens released him from the team.

Underlying assumption #1: Allow me make it clear that what Ray Rice did was wrong. There is no excusing his behavior. This is important to remember.

First, allow me to point out a glaring inconsistency in the worldview of most people. The evidence is clear: Ray Rice struck a woman. For my entire life, there has been an unwritten rule that men do not hit women. For good reason, even secular people abhor when a man abuses a woman. In our culture, it is not a dishonor for two men to fight; but no matter what a woman does to a man our culture generally accepts that it is intolerable to hit a woman.

Yet, ours is the culture that wants to redefine gender roles and make general claims about equality which are irreconcilable with the idea of judging a man for hitting a woman. (If you think I am arguing for tolerance of striking a woman, refer back to underlying assumption #1). What I am saying is that you cannot simultaneously hold the position that men and women are completely equal, that is, not different in a fundamental way based on gender, and hold the position that it is inherently wrong for a man to punch a woman because of gender. You must have another basis for your judgment of Ray Rice.
Again: men hitting women is wrong. Basing your judgment on standards you deny is irrational.

So what is your standard? Should NFL players not be allowed to hit girls? What about if Michael Sam punched his boyfriend? The storm of irrationality which would follow would at least be more entertaining than most reality TV. It would be interesting to see if Michael Sam could ever publicly be considered to do anything wrong; that’s another topic. But the obvious and unacceptable inconsistency in the general logic of our population isn’t the point of this article.

Secondly, why does the video all of a sudden make it worse? I saw a tweet which summed up my sense of the issue. It went something like this. “We now know exactly the same thing that we knew about Ray Rice before seeing the video.”

For some reason, seeing the evil act made it worse in people’s judgment. No one got any new information, but now his behavior is outrageous–even to his former team. Is there any rational explanation for how the video honestly changed someone’s opinion of the events?

This is a serious problem in our visual culture and the Church. There has never been a time in history where people have had more access to movies about the Bible and, at the same time, more illiteracy concerning the Bible. This is yet another symptom of the modern day downgrade, where the Word of God has become insufficient in the minds of men, so it is replaced by visual stimulation. The fact that the same problem is exhibited in the Ray Rice situation is simply more evidence that many professing Christians are really just acting like nonbelievers. Intelligent, discerning people are able to believe truth and make adequate judgments with or without visual aids.

Again: men hitting women is wrong. Judging the action differently based on a textual description or a video is irrational.

Nevertheless, although it is pathetic that we are a culture where reading about hitting a woman is not taken as seriously as seeing the video, that isn’t the point of this article.

Thirdly, I also want to point out an obvious fact which does not excuse Ray Rice’s behavior, but might help explain it. Ray Rice does a job in which he and hundreds of other men are heftily paid and rewarded for brutality. There is a saying that if you did most of what goes on in a football game on the street, you’d be arrested. We are becoming a more violent culture where things like ultimate fighting challenges and, yes, even the holy grail of football are becoming more popular than skill sports like baseball or basketball. I understand that it is a controlled violence to an extent, but let’s face the fact that there isn’t a week that goes by where a young man isn’t seriously injured. Men are committing suicide and battling mental illness as the result of the alteration of their brains from years in this game. Could this be an indication we are approaching a time more like the time before God sent the flood when every thought in the heart of man was violence?

Be honest. Have you ever felt a tinge of excitement or happiness when a player on an opposing team was injured? Admit it to God if you have! I saw it at a high school game once while sitting amidst a group of moms. I observed a sickening lack of care for the fact that a 16 or 17-year-old boy was in pain and injured on a field–all because he played for the opposing team in a pretty fierce rivalry. They were actually happy he was on the ground, hurt!

Again: Men hitting women is wrong. Being utterly shocked men who are paid to be violent end up violent even when off-duty–away from the field of play–is irrational.

There are a host of other contributing factors to incidents like Ray Rice’s. Alcohol and drug use, a culture which exalts the exploitation of women as sex objects, and the creation of more deviant and available pornography all contribute to the eventual acceptance of Ray’s type of behavior. Thank God for the apparent irrationality of so many people who have no basis by which to judge Ray Rice, yet still do. But the fact that we are a nation which is incrementally and increasingly encouraging all sorts of violence is not the point of this article.

Fourthly, we are all Ray Rice.

That’s right. Ray Rice is not the problem. Humanity is the problem. Ray Rice is simply an example of someone who lived out man’s depravity in a more extreme way that most people are ready to accept. Again, there is some apparent irony in a society that almost totally embraces and celebrates homosexual lifestyles and abortion yet condemns Rice’s actions.

Do you really believe Rice is the first wife/fiancée/girlfriend-beater in the NFL? How many NFL players would be suspended for life now if they were in the seemingly unfortunate circumstance in which Rice found himself–probably the worst moment of his life (he is not the victim)–was recorded on video?
How many men beat and abuse women regularly or even once and are never caught or reported? What if every moment of your life was recorded? Would you be so quick to point out Rice’s wrongs?

We need to face the facts, Matthew 10:26 says “For there is nothing covered that will not be revealed, and hidden that will not be known.” Ray Rice is paying a penalty in this life for his sin. Maybe, at this moment, you feel you are getting away and are going to get away with yours. Perish the thought! Cast yourself on the mercies of Christ this moment, if you have not. I seriously hope Ray will.

Would your employer want you around if he saw the way you spoke to (yelled at) your spouse or children? How about your spouse, would she be excited to be intimate with you if she looked through your eyes as you browse the Internet or saw how your eyes wander where they shouldn’t as you walk down the street? What about your kids? Would they look up to you if they knew how little effort you put in at work or toward your Bible reading and daily prayer? Dear Christian, aren’t you glad Sunday service isn’t a video review of your week?

Again: Men hitting women is wrong. Being shocked and lashing out at Ray Rice, while practicing sin in your own life, is not only irrational; it is ungodly.

But there is something wrong with believing Ray Rice’s sin is unforgiveable. Do not make that mistake. Jesus Christ is more able to forgive sins than Ray Rice is able to committing them. Thank God that is true, dear reader.

That’s right. I am Ray Rice. There is a singular night in my past where I acted as Rice acted that night. But there were neither cameras nor police present, only a forgiving female and a fraternity that didn’t care enough to judge me. All the factors I cited above contributed: a fantasy rape culture fueled by porn, alcohol, marijuana, and a party lifestyle that created opportunity for the conflict. What were missing from my incident were a video camera and, sadly, any remorse on my part. It was almost a decade before I even cared about what I’d done. How despicable is that?

By the providence of God alone no one was hurt. A simple nail sticking out of a wall where a picture frame should have been could have changed my life forever. But that wasn’t how God planned it. It is one of the hundreds of times in my life in which I was fortunate that I did not end up killing someone or myself. I’m not exaggerating. It isn’t an “I was a worse sinner than you” contest. I offer that number to give you an idea of the exceeding greatness of a God-Man, Jesus Christ, who could satisfy the wrath a sinner such as I deserved, through His sacrificial death on the cross and His glorious resurrection.
Is Ray Rice redeemable? He’s as redeemable as you and I. His redemptive worth is not based on himself, but on the worthiness of the Redeemer, Jesus Christ. Do you know Him? Are you saved by grace, through faith, because of the death, burial, and resurrection of the Christ? Repent and turn to Jesus today for He is always ready to forgive sinners, and he will not cast out any who come to Him!

Christian: how much time have you put into prayer for Ray Rice’s soul? Do you truly want to see him and his wife restored and raising their daughter to know Jesus?

I am Ray Rice. The Ray Rices of the world are our mission field. I thank God He never ran out of patience with me. I thank Him for the people who brought the gospel to me. I’m thankful I could not out-sin God’s grace, no matter how vile and wretched I was.

Again: men hitting women is wrong. Telling people who hit girls about forgiveness and salvation available only through Jesus is what Christians are called by God to do.

This is the point of the article: I am Ray Rice. You are Ray Rice. We are all Ray Rice. May God have mercy on our souls.