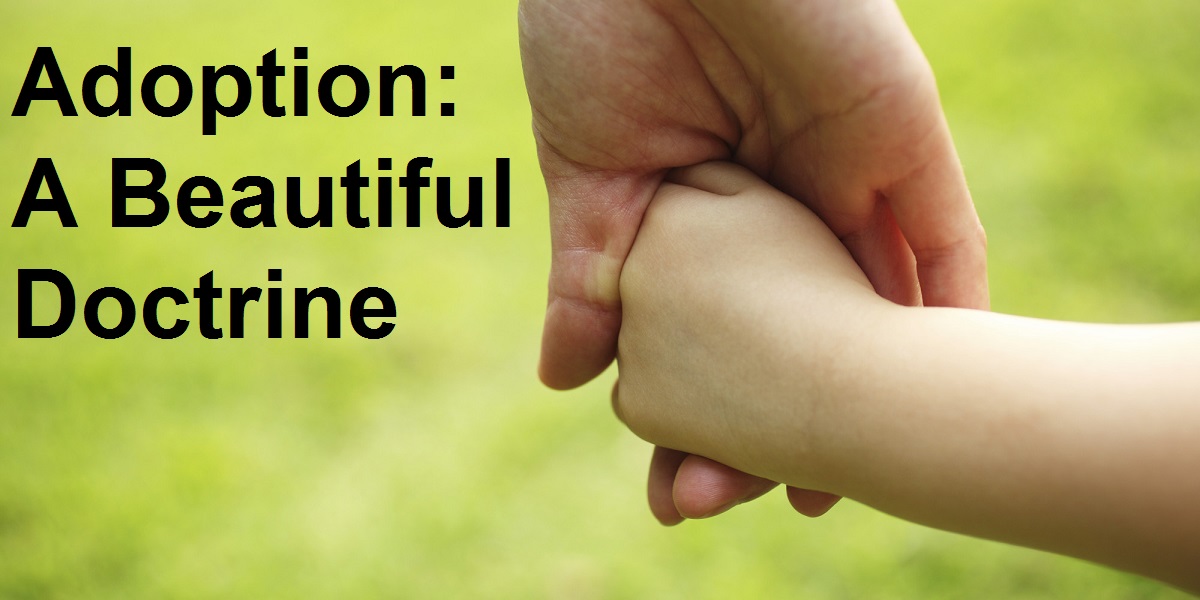 It was Tuesday, March 8. A dozen men and I had just finished a full day of ministry on the UCLA campus. We returned to Santa Clarita and refreshed ourselves at Corner Bakery, having a couple hours to kill before dinner. As we talked about the day, and life in general, we soon discovered a number of us had more in common than our love for Christ, His Bride, and the lost. The other common thread woven through the lives of several of us was adoption.

What a blessed time of testimony and praise to our adoptive Father, God Almighty! Danny shared about his four adopted sons (all biological brothers) from Uganda. Pastor Mike shared a precious story about something he and his adopted daughter do together each night at bedtime. Nick talked about the decision to change not only the last name of his adopted children, but also their first names. I boasted about the musical talents of my two nieces adopted from Liberia and my nephew adopted from Uganda. And Simon told us about the process he and his family are in right now to adopt two foster children.

When the impromptu, round table discussion quieted a bit, I shared something with the men that I have used often in open-air preaching and one-to-one conversations to illustrate the love of God, as seen in His adoption of those He has, with eternal predetermination, elected to save. It’s the adoption of abandoned, orphaned, or otherwise displaced children. What better way to paint a picture of the Doctrine of Adoption than with the physical adoption of children.

So, here it is, Simon. I hope this encourages you, brother, as well as anyone else who may read it. And if you are an evangelistic Christian (there shouldn’t be any other kind), try using this illustration in your next gospel conversation.

“So then, brothers, we are debtors, not to the flesh, to live according to the flesh. For if you live according to the flesh you will die, but if by the Spirit you put to death the deeds of the body, you will live. For all who are led by the Spirit of God are sons of God. For you did not receive the spirit of slavery to fall back into fear, but you have received the Spirit of adoption as sons, by whom we cry, ‘Abba! Father!’ The Spirit himself bears witness with our spirit that we are children of God, and if children, then heirs—heirs of God and fellow heirs with Christ, provided we suffer with him in order that we may also be glorified with him” (Romans 8:12-17).

“But when the fullness of time had come, God sent forth his Son, born of woman, born under the law, to redeem those who were under the law, so that we might receive adoption as sons. And because you are sons, God has sent the Spirit of his Son into our hearts, crying, ‘Abba! Father!’ So you are no longer a slave, but a son, and if a son, then an heir through God” (Galatians 4:4-7).

“Blessed be the God and Father of our Lord Jesus Christ, who has blessed us in Christ with every spiritual blessing in the heavenly places, even as he chose us in him before the foundation of the world, that we should be holy and blameless before him. In love he predestined us for adoption as sons through Jesus Christ, according to the purpose of his will, to the praise of his glorious grace, with which he has blessed us in the Beloved. In him we have redemption through his blood, the forgiveness of our trespasses, according to the riches of his grace” (Ephesians 1:3-7).

The same is true of the loving, benevolent, gracious, merciful, kindhearted Creator–God the Father. Every one of His children–all but One, that is–are adopted. The only One who was not adopted is Jesus Christ–the eternal, uncreated Son and second Person of the Triune God.

“Have this mind among yourselves, which is yours in Christ Jesus, who, though he was in the form of God, did not count equality with God a thing to be grasped, but emptied himself, by taking the form of a servant, being born in the likeness of men. And being found in human form, he humbled himself by becoming obedient to the point of death, even death on a cross. Therefore God has highly exalted him and bestowed on him the name that is above every name, so that at the name of Jesus every knee should bow, in heaven and on earth and under the earth, and every tongue confess that Jesus Christ is Lord, to the glory of God the Father” (Philippians 2:5-11).

“He is the image of the invisible God, the firstborn of all creation. For by him all things were created, in heaven and on earth, visible and invisible, whether thrones or dominions or rulers or authorities—all things were created through him and for him. And he is before all things, and in him all things hold together. And he is the head of the body, the church. He is the beginning, the firstborn from the dead, that in everything he might be preeminent. For in him all the fullness of God was pleased to dwell, and through him to reconcile to himself all things, whether on earth or in heaven, making peace by the blood of his cross” (Colossians 1:15-20).

No human being, no son or daughter of Adam born with an inherited sinful nature (Romans 5:12-14), is born a child of God. All people, you and me, are born children of wrath (Ephesians 2:1-3). It is not the love of the Father that abides on people in their unregenerate state. It is the wrath of God that abides on them (John 3:36).

The selection of the child, having been made by God the Father; the process having been completed by God the Son; the seal of adoption having been set by God the Holy Spirit, the adopted child is officially and eternally a member of God’s family.

The adopted children of God, those He has caused to be born again to a living hope (1 Peter 1:3), are no longer called:

The adopted children of God, those He has caused to be born again to a living hope, are no longer clothed in the filthy garments of sin (Romans 13:14), but are clothed in the righteousness of Christ (Romans 4:1-25; 2 Corinthians 5:21; Philippians 3:8-11).

Adoption and the Doctrines of Grace

When Christians adopt children, it is a beautiful expression of their own salvific adoption into the family of God. Adoption, as far as I’m concerned, is one of the most beautiful doctrines in Scripture. The Doctrine of Adoption beautifully illuminates the precious Doctrines of Grace.

The adoptive parents sacrifice a great deal to make the adoption happen, but their sacrifice is not for every orphaned, abandoned, and displaced child. Their sacrifice is only made on behalf of the child (children) they chose to adopt.

Adopted children, when faced with the reality of a new life away from poverty, degradation, and hopelessness as an abandoned, displaced orphan is not dragged away kicking and screaming into the loving arms of their adoptive parents. They run into the arms of the ones who, with outstretched arms, say, “We love you. We want you to be part of our family. Come with us.”

And adoption isn’t a trial run. It’s a lifetime commitment. The adopted child leaves the lonely life of uncertainty, brokenness, and void of family attachment to begin a life of assurance knowing they were chosen by their parents–knowing they will never be abandoned again.

The same is true of the loving and gracious God who saves children of wrath and makes them children of His beloved family–not on the basis of anything they have done in righteousness, but rather according to His mercy (Titus 3:4-7). No child of wrath is worthy of God’s love through adoption. God determines who He will adopt. He sacrificed His Son Jesus Christ to secure the adoption of those He has chosen. His adopted children, having been given a new name, new clothes, and a new home run into the Father’s love. Such grace is irresistible. And God’s adopted children live with the assurance that once having been adopted by the Father, will forever be co-heirs with Jesus Christ the Son of God.

Have You Been Adopted?

Yes, adoption is a beautiful doctrine. Have you been adopted by God the Father, through faith in God the Son? If not, if you’re not sure, please follow the below link to learn how you, too, can be adopted into God’s forever family.

If Christian Nationalism succeeds (I don't believe it will succeed nor do I hope it will), then American Christians will be robbed of something many American evangelicals do everything they can to … END_OF_DOCUMENT_TOKEN_TO_BE_REPLACED