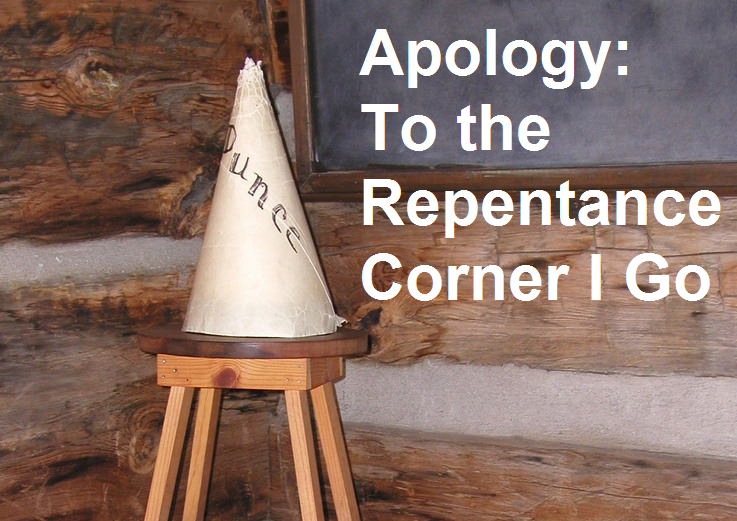 Yesterday was Election Day in the United States. Like tens of millions of Americans, I went to my local polling place to cast my votes. I did not vote for any Presidential or the US Senate (CA) candidates. But I did vote for candidates in other races and for (or against) local bond and legislative measures. I got a sticker and everything. This morning as the political dust settles and I look back on my social media presence throughout the night I find myself once again in the place where an apology is in order. When it comes to speaking my mind, still too often I have more in common with the Sons of Thunder and Luther than Paul and Spurgeon.

As for many evangelists throughout the country, yesterday was a very busy day. I distributed hundreds of gospel tracts in parking lots, on the streets, and at my local polling place. I walked almost five miles and dodged a municipal code enforcement officer in the process. I spent a couple of hours in 90-degree heat (November in SoCal) standing on corners holding a sign that read: “No Matter Who’s President, Jesus Is King.”

After dinner with Mahria and the girls, I settled in to listen to the election returns on the radio (we don’t have cable TV in our home). I also followed the process on my social media feeds (Facebook and Twitter).

Before long, I was posting my thoughts about the election, American Evangelicalism, and the country on my social media feeds. This is sometimes a good thing, but not always.

A Failed Attempt at Satire

As the hour got later and my mind and fingers started to roll, I tried my hand at satire–you know; the whole Babylon Bee thing (I enjoy the site). Some folks ate it up. People were liking, commenting on, and sharing my posts. Yeah, I went there. With each satirical post, my rhetoric sharpened and my mood darkened. I should have stuck with Plan A: turn off the phone and radio, and read my Bible.

When I awoke this morning, I still had a little sarcasm in the tank. I fired off a couple more satirical shots across American Evangelicalism’s proverbial bow.

At 7:00 AM, my sister called me and asked if we could grab a cup of coffee together. As we sat across the table from one another, catching up on each other’s lives, I showed her a couple of my Tweets from the night before. My sister–one of my toughest, most honest, most loving critics (and encouragers)–didn’t laugh. Not even a little. So, that got me thinking.

The Forethought of Friends

After I said goodbye to my sister, I got in the car and began to ask myself if I might have gone too far with my social media pugilism. I went home, took care of a few things, and then headed out to run a couple errands. Before leaving my first stop, I checked my email. Waiting for me was the following email from a friend:

“Hey Brother, Gotta hit you with a tough one because I truly care. You are getting wound up way too tight on all this political stuff. I am not saying you are incorrect in your theological assessment. But you are coming off very negative and dangerously close to sarcasm directed to fellow believers. I think I understand what you are saying but two people who really think a lot of you and read everything you write have told me they have hid you on FB because of the negativity and sarcasm. OK, here is my opinion (which is only mine) of why you are going in that direction. And I see it in myself sometimes. You are hardcore on the streets daily; you have genuinely surrendered and sacrificed all to Him. You are truly living an obedient life to which He has called you. You have, and are, paying a price for this obedience. It is not part-time for you and your family, it is full-time and real. I know you count it all a joy. As such your tolerance for timidity and secular obsessions such as politics in the life of a professed believer is minimal. It is easy to become like this. I have Christian friends that barely pay attention to spiritual conversations but bring up Hillary and they explode. Brother, you are too much of an encouragement to too many people to get sidetracked. Avoid the fatal funnel of bitterness and becoming hard. Keep your scan going and maintain your spiritual situational awareness! …with gentleness and love…. God bless.”

And then another friend sent me this short note:

“I really respect you as a law enforcement officer like myself & as a pastor but your tweets don’t sound very pastoral.”

I can’t and won’t argue with forethought like that. Believe it or not, I really appreciate correspondences like the ones above. I have a great deal of respect for people, even people I don’t know well, who contact me to hold me accountable, with gentleness and respect. Again, believe it or not, I try to listen with a humble and discerning ear. Saying “I try” implies occasional failure, which I readily admit.

I decided to go back through my tweets and posts from the last couple of days and delete all of those directly related to politics, whether they were fiery or not. And then I came across this one…..

Talk about adding salt to a well-deserved, open wound! I guess I should place myself at the front of that apology line.

I have learned that genuine repentance is more than making an apology. For repentance to be genuine, it must also include the seeking of forgiveness. While what follows is written as an apology, please know that I am seeking the forgiveness of anyone (saved or unsaved) I offended with my posts. I am seeking the forgiveness of any brothers or sisters in Christ I caused to stumble, whether the stumbling manifested in the form of anger or stumbling right along with me by enjoying and/or sharing my tweets and posts from last night.

Close friends, good friends have told me for years that I have a certain amount of influence, at least in my little corner of a small village (biblical evangelism), in the Christian world. I continue to deny it. I don’t know if it is a failed attempt at false humility, or if I simply want to deny it because it somehow removes the responsibility to be a better leader with my mouth and pen. Either way, I am getting too old and time is growing too short for me to keep sinning and apologizing in this area of my life. There’s no getting around it; it’s a character flaw.

Every time I find myself making a public apology it upsets some. I think the reason is that reading my public apology forces them to deal with similar sins in their own lives. If this describes you, please stop kicking against the goads. Follow me only to the extent I follow Christ. Please don’t use my sin as a justification for your own or as an excuse for a lack of repentance in your own life.

Help Me; Don’t Hinder Me

Some of you may read this and think: “Wait a minute. I read all of Tony’s tweets and posts from last night. I didn’t find anything wrong with them. He doesn’t need to fall on his sword. He was telling the truth. I’m gonna let him know.”

If this is you, please don’t contact me to “let me know.” Oh, I know you mean well. I certainly don’t question your intentions. Not at all. But it’s not helpful to me to have people tell me I’m being too hard on myself when I need to mortify sin in my life. It’s a hindrance to me. It’s too easy for me to believe you and minimize my own sin.

You can help me by letting me know when I fall short of God’s glory on social media. If you’re right–not according to any arbitrary standard I set, but according to the Word of God and the review of what I’ve said or done by the spiritual leadership and accountability in my life–then I must repent. I want to repent. And I will thank you for your help.

Again, if I offended you or caused you to stumble by my social media presence over the last couple days (or longer), I ask for your forgiveness and I hope you will accept my apology.

I met Bentley and his grandfather Steve while fishing at Pride Lake, in Scott County Park. This is the story of God's gracious providence. A three-Fold Purpose For me, there is a three-fold purpose … END_OF_DOCUMENT_TOKEN_TO_BE_REPLACED