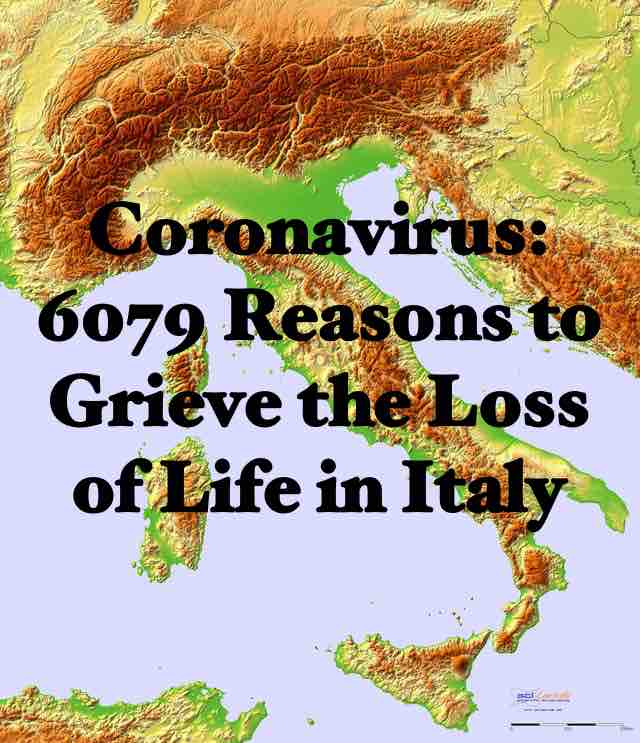 The Coronavirus is on everyone’s mind and in the bodies of no less than 536,374 people. This morning I have at least 6079 reasons to grieve the loss of life in Italy.

As of the writing of this article, there are 536,374 confirmed Coronavirus cases, worldwide. Of those, 80,589 are in Italy. Sadly, 8,215 Italians have died. That’s 1/3 of all the current worldwide Coronavirus-related deaths. The first deaths in Italy occurred on my birthday, February 22.

For some perspective, at least for my fellow Iowans, Iowa presently has 179 confirmed Coronavirus cases, with one virus-related death. This does not trivialize the 179 or the one. Every life matters.

I’ve tried to be on the streets every day during the Pandemic. Most of my street evangelism time has been spent crosswalking and manning my Prayer Stand. During this time I’ve had a reoccurring thought–one that grieves me.

While more than 8,200 Italians have died from the Coronavirus, at least 74% of them (6079) likely professed to be Roman Catholic. And that’s been the focus of my grief.

When a Catholic Coronavirus Victim Breathes His last

As I’ve stood on various corners in my community holding my “Stop and Talk” cross and waving to passing motorists, I’ve thought about the Roman Catholic who, having succumbed to the Coronavirus, found himself or herself standing before God and shocked by at least two specific realities: 1) Mary never interceded for him or her; 2) not a drop, not a speck of grace flowed to him or her through Mary.

Not one “Hail Mary,” not one recitation of Ave Maria benefited, in life or in death, the now-deceased Roman Catholic. Mary wasn’t listening. Mary wasn’t helping. Mary wasn’t interceding. Mary is not full of grace. In a moment, in the final closing of their eyes, every Roman Catholic, whether in Italy or elsewhere,  if they died from the Coronavirus believing these heresies involving Mary, was brought to the crushing, eternally-damning reality that Mary is not their co-redeemer.

This leaves me heartbroken. My Christian brethren: this should break your hearts, too.

Only the Gospel Saves

But if you’re reading this article, it’s not too late for you. Please read the following carefully.

You have sinned against this God. You have broken the Law He has written on our heart, in thought, word, and deed.

Because God is good, because He is holy, righteous, and just, He must punish your sin. He must punish every instance when you broke His Law. And the punishment God has determined for all sin is an eternity in hell.

2,000 years ago, God the Father sent His Son to earth in the person of Jesus Christ–truly God and truly man, yet without sin. He lived a perfect life, as God-in-the-flesh, from cradle to grave–a life that you cannot possibly live. Jesus perfectly obeyed the Law of His Father, in thought, word, and deed.

Yet even though He knew no sin, at a time appointed before the foundation of the world, Jesus Christ, God the Son, voluntarily submitted Himself to a horrific, bloody death on a Roman cross. He literally took upon Himself the punishment those who would believe in Him rightly deserve for their sins against God. He bled; He suffered; He died; He was buried. And three days later he forever defeated sin and death when He rose from the grave. He is alive today, and He will return at a time of the Father’s choosing.

What God requires of you is that by faith in Jesus Christ alone you repent and receive Him as your Lord and Savior.

If God does His miraculous work in you, if He literally causes you to be born again–born from above, He will forgive your sins against Him. You will be reconciled to the God you have spent your life offending by your sin. And you will have the assurance of eternal life–not on the basis of anything you have done to earn it or deserve it, but rather on the basis of God’s love that would allow His one and only Son to die on behalf of sinners like you.

God commands you this day to repent and believe this gospel. You can only be saved by the grace of God alone, through faith alone, in Jesus Christ alone. Neither church attendance nor good works can save you. Only Jesus Christ and His once-and-for-all-time sacrifice on the cross can save you. Only Jesus can forgive your sins. No mere man can do that.

Turn to Christ and live while God has given you time.

NOTE: I started writing this article a little over an hour ago. During this time, 20,000 more people have been confirmed infected with the virus, and hundreds more have died. This shouldn’t be a cause for panic among Christians. But it should increase our urgency to proclaim the gospel to all people, including Roman Catholics. If you are not in Jesus Christ, if you have not received salvation by faith in Him alone, then you have a reason to fear. More than contracting a virus, you should fear the Lord.

Reaching Roman Catholics with the Gospel

With the above in mind, and since this article has focused on Roman Catholics, allow me to share with you some tips and resources for communicating the gospel to Roman Catholics.

Never assume the Roman Catholic person standing in front of you either knows or believes the myriad heretical teachings of his or her false religion. Take the time to learn what the person believes by asking him what he believes about life, death, and eternity. Many Roman Catholic laypeople are ignorant of the extent of false teaching and the ramifications of it in their religion.

Don’t begin the conversation with a Roman Catholic by attacking Mary, the pope, or the church. That is tantamount to you approaching me to talk about marriage and beginning the conversation by telling me how ugly you think my wife is. The conversation isn’t going to last long.

There may be an appropriate time later in the conversation (or during subsequent conversations) to discuss the various heresies of Roman Catholicism and why it is at least a false religion and likely a cult. But your ability to argue against the worship of Mary, the Papacy, the Rosary, the Mass, the Confessional, etc., will not win a single Roman Catholic to Christ. None of these arguments (all important and have their place) are the power of God for salvation. Only the gospel has that power (See Romans 1:16).

Winning the argument should never be more important than winning the soul.

Stick to the Law and the gospel. Use the Law of God as a mirror to show the Roman Catholic in front of you that they are not good, according to God’s perfect, moral standard. Lovingly let them see that because of their sinful condition there is nothing they can do to merit or maintain the love of God and the salvation He gives through faith in Jesus Christ. Communicate to him or her that salvation is only by the grace of God alone, through faith alone, in Jesus Christ alone.

Christian: if you are new to verbally communicating the Law and the Gospel to lost people, you will find a detailed presentation, HERE.

Here are some helpful resources for bringing the gospel to Roman Catholics:

Over two million of these tracts have been distributed. “Roman Catholicism: Scripture vs. Tradition,” by Mike Gendron, is probably the best gospel tract of its kind. If you are going to be engaged in evangelism where it is likely you may run into Roman Catholics, you should have a supply of this tract on hand. This gospel tract is also available in Spanish.

There are only two worldviews in existence: 1) with God; 2) without God. Biblical Christianity falls into the first category. Everything else, including Roman Catholicism, falls into the second. My friend Sye Ten Bruggencate has developed a series of gospel tracts that address the well-known religious systems of the world. Sye’s Questions for Roman Catholics tract is an excellent resource.

I met Bentley and his grandfather Steve while fishing at Pride Lake, in Scott County Park. This is the story of God's gracious providence. A three-Fold Purpose For me, there is a three-fold purpose … END_OF_DOCUMENT_TOKEN_TO_BE_REPLACED