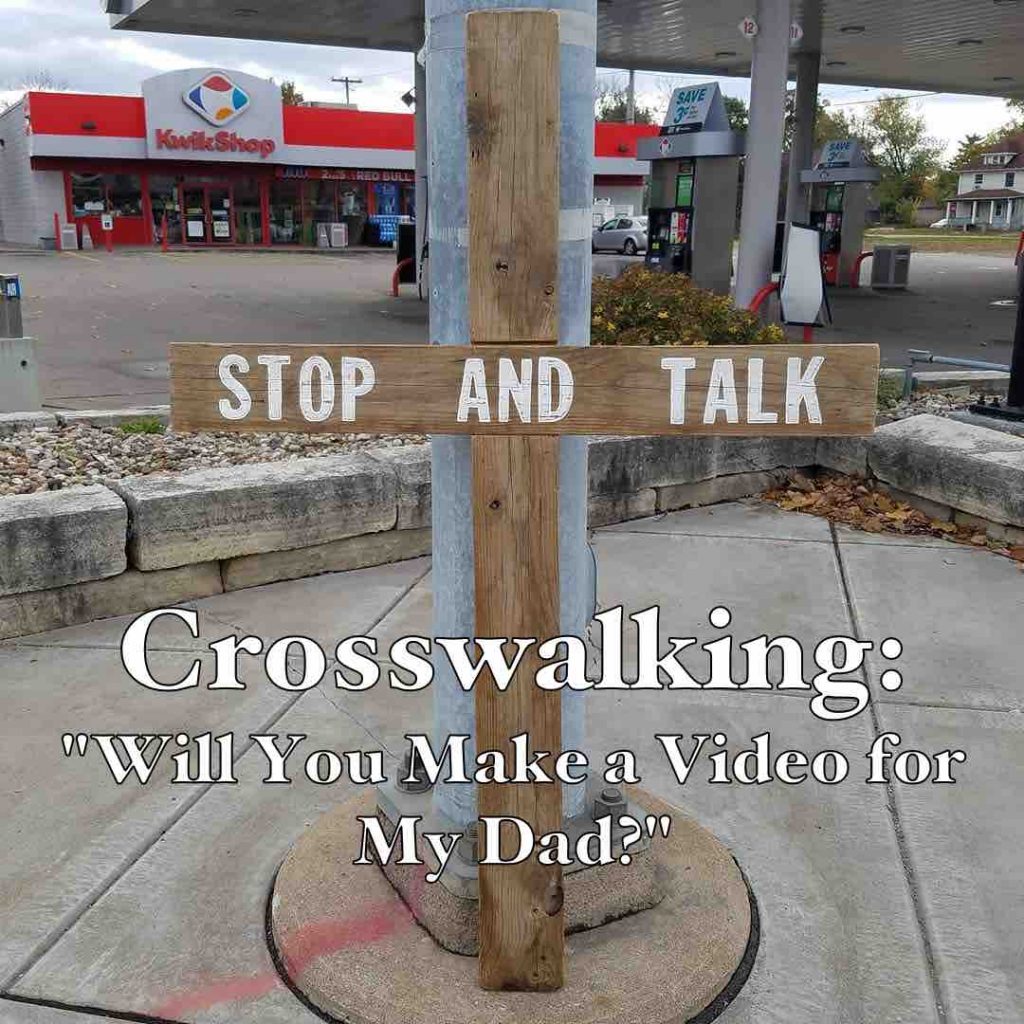 On this particular day, Allison saw a man carrying a cross. She stopped to talk to me hoping the God who created her would hear my prayer for her dad.

Crosswalking at Locust and Marquette

After a full morning outside the Planned Parenthood abortuary in Iowa City, Donnie (my son-in-love) and I spent a couple of hours at the corner of Locust and Marquette, in Davenport. We were there to engage in crosswalking and sign evangelism.

Traffic was lighter than usual, no doubt a result of the state of the nation and our city due to the Coronavirus Pandemic. Yet, there were still plenty of cars on the road. In the two hours Donnie and I were there, hundreds of motorists saw my “Stop and Talk” cross and the gospel signs Donnie held.

What had started as a cold and cloudy day turned out to be mild and sunny—mild, that is, by Iowa standards for late March. Due to the low position of the sun in the sky, I had to squint to see if northbound motorists were returning my waves. Some did. Some gave approving honks. Others drove by with their heads locked forward, making sure not to make eye contact with either of us. Still, others intentionally looked in the opposite direction as if to say, “If I can’t see you, then you can’t see me.”

It was a typical afternoon of crosswalking, as far as motorist behavior goes. Sadly, that typical behavior includes the occasional motorist who finds some way to heckle me. This afternoon, in addition to a few “one-finger waves,” one man threw a lit cigarette at me. Another young man rolled down the passenger window of the car in which he was riding. He motioned with his hand as if he was trying to make something waft out of the car. As the car got closer to me, I could smell the unmistakable odor of burnt marijuana emanating from the passenger compartment of the car, via the open passenger window.

That last sentence read like one of my old arrest reports.

Whether proponent or antagonist, motorists received the same response: a friendly wave and a smile.

A Car Pulls Into the Lot

While standing on the corner holding my cross and waving at passing motorists, I looked behind me, which I often do. Traffic noise is such that it makes it difficult to hear people walking up behind me. I like to stay vigilant (not paranoid) to be aware of my surroundings. If someone means to do me harm, I at least want to see it coming. I also don’t want to miss a gospel tract or conversation opportunity.

At one point, as I turned to look toward the parking lot, I saw a small red car pull into the parking space closest to where I was standing. Whitey’s Ice Cream parlor, the business to which the parking lot belonged, was only serving drive-thru orders due to the state-mandated shut-down of all dine-in restaurants. The driver wasn’t wearing the customary Whitey’s employee garb. Therefore, I knew the young lady behind the wheel wasn’t a customer or an employee of the establishment. The reason she stopped was to talk to me.

I waited for the young lady to motion for me to walk over to the car. Even though I was confident why she pulled into the parking lot, I didn’t want to make a wrong assumption and thus make her nervous by walking toward her car, uninvited. As I anticipated, the young lady rolled down her window and motioned with her hand for me to approach her car.

I slowly walked toward the car, lowering my cross as I proceeded. Again, since I was approaching a young lady I had never met, I wanted to make sure I was as non-intimidating as possible.

“Allison,” was her reply.

“Oh, I have a lovely niece named Allison,” I told her, as I handed her a gospel tract.

I noticed a small child in a car seat, in the back seat of Allison’s car.

“Has it been a good two, or a terrible two?” I asked with a grin.

“Oh, it’s been a terrible two,” Allison answered with a roll of her eyes.

A Request for Her Dad

Allison slowly raised her cell phone into the open window area of her car door, so I could see it.

“Would you be willing to make a video for my dad to let him know you will pray for him?” Allison asked, somewhat sheepishly. “My dad has had a pretty tough week.”

I’ve seen and heard a lot of things on the streets while engaged in evangelism. This year marks ten years of crosswalking and 16 years of open-air preaching and other forms of street evangelism. I can unequivocally assert that no one has ever made the request of me that Allison had just made.

Just tell me when you want me to start,” I said.

“You can start now,” she instructed.

“Okay. Hi, Mark. My name is Tony. I’m a member of Grace Fellowship Church, here, in town. Allison told me, without going into any details, that you are having a tough week. She asked if I would pray for you. Well, Mark, I would be glad to pray for you. And I want to encourage you to look to Christ. Cling to Jesus Christ. He is where you will find hope and peace in these troubled times.” I said.

Allison put her phone down.

“Thank you so much,” she said with a smile.

“My pleasure,” I replied. “Do you have any particular spiritual beliefs?” I asked.

“No,” she said. “I believe that if you do good, then good things will come back to you.”

“Allison, can I ask you something?” I asked.

“You said you don’t have any spiritual beliefs,” I reminded her. “Then why would you ask me to pray to God for your dad?” I asked.

“He’s my stepdad. I never knew my actual father. He’s the only dad I know, and I love him very much.” She explained. Allison now had tears in her eyes.

Allison didn’t actually answer my question; but, then again, she did.

You see; like every other human being—past, present, and future—Allison knows that God exists.

“For the wrath of God is revealed from heaven against all ungodliness and unrighteousness of men, who by their unrighteousness suppress the truth. For what can be known about God is plain to them, because God has shown it to them. For his invisible attributes, namely, his eternal power and divine nature, have been clearly perceived, ever since the creation of the world, in the things that have been made. So they are without excuse. For although they knew God, they did not honor him as God or give thanks to him, but they became futile in their thinking, and their foolish hearts were darkened. Claiming to be wise, they became fools, and exchanged the glory of the immortal God for images resembling mortal man and birds and animals and creeping things.

“Therefore God gave them up in the lusts of their hearts to impurity, to the dishonoring of their bodies among themselves, because they exchanged the truth about God for a lie and worshiped and served the creature rather than the Creator, who is blessed forever! Amen” (Romans 1:18-25).

Allison stopped to ask for prayer for her dad, not because prayer is just another rabbit’s foot in her collection of superstitions (even if she were to argue that way, which she didn’t). She knew better, even though she asserted she didn’t have any spiritual beliefs.

Allison knows that the God of the Bible exists. And she has a relationship with Him. Right now, the relationship she has with God is one in which His wrath abides upon her because she is outside of Christ. She does not know Jesus Christ as her Lord and Savior.

On this particular day, Allison saw a man carrying a cross. She stopped to talk to me hoping the God who created her would hear my prayer for her dad.

Allison Hears the Law and the Gospel

“Allison, can I take a few minutes and share with you what I believe?” I asked.

Allison and I Have Something in Common

“Allison, I’m 56 years old. I’m probably older than your dad. (She nodded in agreement.) You and I are very different people. We come from different generations, different backgrounds, and different places. But you and I have at least two things in common. Like every other human being, we know that God exists because He testifies to His existence and power through His creation. We know God exists simply by looking at the world around us. We also know God exists because He has written His Law on our hearts. He has given us a conscience. We both know the difference between right and wrong.

Allison, you and I have both sinned against this God—the God we both know. We have broken the Law He has written on our hearts, in thought, word, and deed.

Allison, because God is good, because He is holy, righteous, and just, He must punish our sin. He must punish every instance when we broke His Law. And the punishment God has determined for all sin is an eternity in hell.

I then spent a couple of minutes taking Allison through the courtroom analogy.

“Allison, what would you think of a judge who would make that kind of sacrifice for you?” I asked.

“I think it would be strange,” she said.

“What I just shared with you is a picture of what God did. 2,000 years ago, God the Father sent His Son to earth in the person of Jesus Christ—truly God and truly man, yet without sin. He lived a perfect life, as God-in-the-flesh, from cradle to grave—a life that neither you nor I can possibly live. Jesus lived a life of perfection. He perfectly obeyed the Law of His Father, in thought, word, and deed.

“Yet even though He knew no sin, at a time appointed before the foundation of the world, Jesus Christ, God the Son, voluntarily submitted Himself to a horrific, bloody death on a Roman cross. He literally took upon Himself the punishment those who would believe in Him rightly deserve for their sins against God. He bled; He suffered; He died; He was buried. And three days later he forever defeated sin and death when He rose from the grave. He is alive today, and He will return at a time of the Father’s choosing.

“What God requires of you and me, Allison is that by faith we repent and receive Jesus Christ as our Lord and Savior.

“If God does His miraculous work in you, if He literally causes you to be born again—born from above, He will forgive your sins against Him. You will be reconciled to the God you have spent your life offending by your sin. And you will have the assurance of eternal life—not on the basis of anything you have done to earn it or deserve it, but rather on the basis of God’s love that would allow His one and only Son to die on behalf of sinners like us.

“Does that make sense?” I asked.

“Please take time to think about this, Allison,” I pleaded.

“You’re welcome,” I replied. And thank you so much for stopping and giving me the chance to talk to you.”

With that, Allison rolled up her window, backed out of the parking stall, and drove away.

Join me in praying for Allison and her dad, Mark.