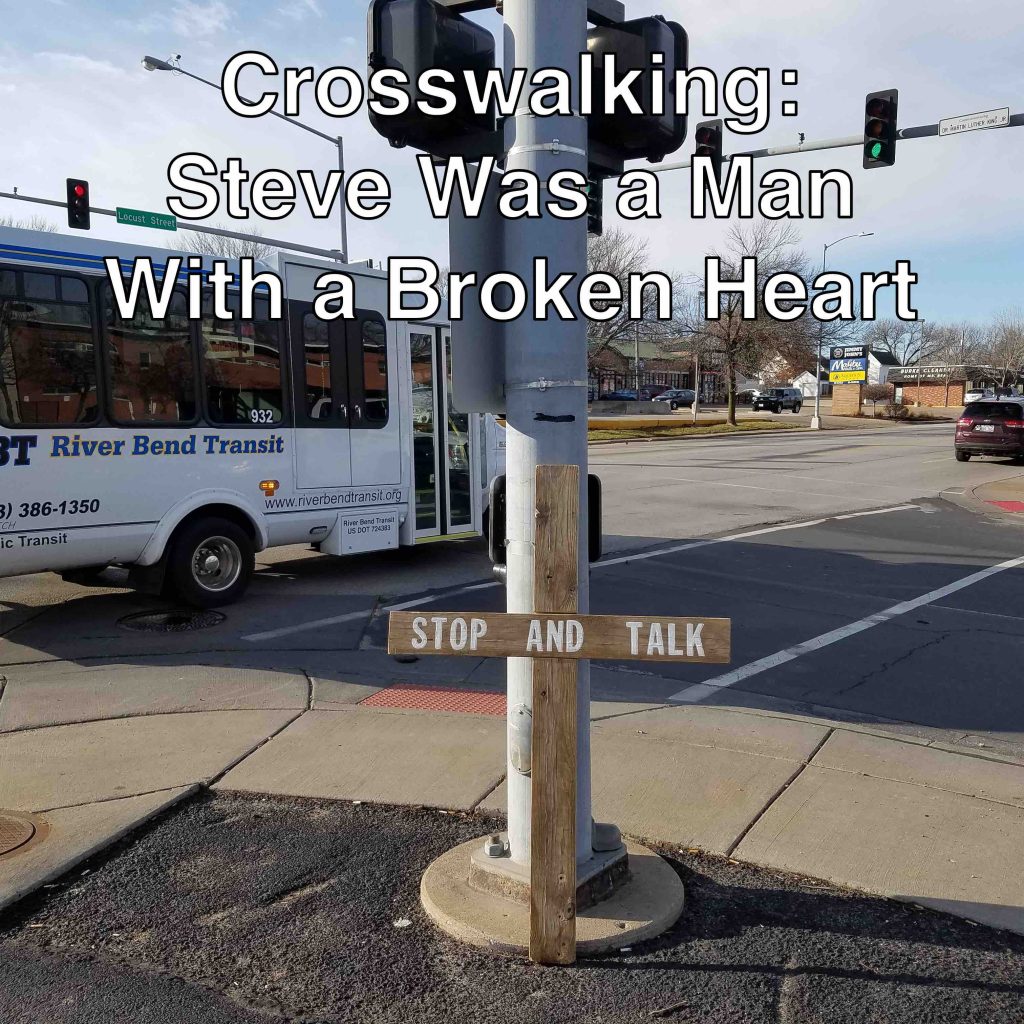 I was crosswalking at the corner of Locust and Marquette. A man named Steve approached me. Steve was a man with a broken heart.

I had just finished an amazing gospel conversation with a couple when Steve approached me at the corner.

“I see you out here all the time,” Steve said, “And I had to stop and talk to you today.”

“Do you have any particular spiritual beliefs?” I asked.

“I do. I’m Lutheran, but I don’t believe everything Lutherans believe. I believe in reincarnation.” Steve answered.

“I came by because our first granddaughter was born on Christmas Eve.” Steve, a large man, started to cry. His voice cracked. “And we’ve already buried her.”

Without saying a word, I put my arms around Steve and held him tight for a few moments.

“I’m so very sorry for your loss, Steve.” I said, trying to console him.

We talked for a few minutes about life and family, and then I asked, “Steve, from where does your belief in reincarnation come?”

“When I was only five-years-old, I had a reoccurring dream,” Steve told me. “It was so vivid. I was dressed in a camouflage uniform and I had a rifle. In the dream, I was in a very wooded area. I was laying down behind something. There were other men with me.

“Because of that dream, I believe I’m a reincarnated Vietnam vet.” Steve said.

“Wow. That was quite a dream for a five-year-old.” I remarked. “I used to have a reoccurring dream, too.

“I served as a deputy sheriff in Los Angeles County for 20 years. Early in my career, I started having this reoccurring dream.

“I was in a very dark alley. A dark figure, dressed in a black cloak and hood slowly walked toward me. The only features I could make out were the person’s bright, yellow eyes. As he got closer, I ordered him to stop, but he just kept walking toward me. I drew my weapon and order him, again, to stop. He just kept coming.

“Fearing for my life, I fired my gun. To my horror, the bullets just dropped out of the front of the barrel, of the gun, and fell harmlessly to the ground.

“The person let out a blood-curdling laugh and rushed toward me. As he attacked me, I woke up with a start, and breathing heavy.

“While I didn’t have that dream every night, I had it several times, and it was exactly the same. Then, in 1993, I was actually involved in an on-duty shooting. After that incident, I never had that scrary dream again.

“I share that with you just to let you know I understand how very real dreams can seem.” I said.

I Believe I Have a Million Dollars

“What we believe.” Steve answered.

“Okay. What if you approached me and introduced yourself and I told you that I believed you were a 3-9, 90-pound, Asian woman? Would that be true?” I asked.

Steve, looking a bit taken aback, said, “Well, it would be true to you.”

“No.” Steve answered, with a smile.

“No, you’re not,” I said. “No matter what I think or believe about you, you are Steve–a large, white man. Right?” I offered.

“It doesn’t matter what I believe about you, Steve. What matters is what’s true about you. Does that make sense?” I asked.

“Yes, it does.” Steve answered.

“How about this,” I offered. “What if I went down the street to US Bank, made out a withdrawal slip, approached the teller, and said, ‘I would like to withdraw a million dollars, please?’

“The teller looks at me kinda strange and says, ‘Um. Mr. Miano, you only have $28 in your account.’

“Steve, if we believe something and it doesn’t agree with what God has said in His Word, should we believe God or believe ourselves?” I asked.

“We should believe God.” Steve answered.

“Steve, God says nothing in His Word (the Bible) about reincarnation. God is true, though every person is found out to be a liar. The Bible is true. And Jesus said, ‘I am the way, and the truth, and the life; no one comes to the Father accept through Me.’

“The Bible says that it is appointed once for a person to die, and then judgment. You are going to one of two places when you die–heaven or hell. You won’t be coming back here as something or someone else. So, while I appreciate how real your dream seemed, especially having it as a five-year-old boy, you’re not a reincarnated Vietnam vet.” I explained.

Steve thought about what I said for a moment, and then slowly nodded his head.

“Where Will You Spend Eternity, Steve?”

Steve returned to the subject of his recently-deceased granddaughter.

“I’m sure glad we had the baby baptized before she died. I’m sure she’s in heaven.” Steve said.

Not wanting to get mired in a debate, at a very sensitive time for Steve, over the issue of infant baptism and what it means, I said, “Steve, there is nothing wrong with having the hope that your granddaughter is in heaven. Hold onto that hope. But, Steve, more important for you than where your granddaughter is right now is where you will spend eternity.” I gently said.

I communicated the law and the gospel to Steve.

“Yeah, it’s a cold one today!” I exclaimed while thinking, surely this big man is not as cold as I am.

I gave Steve another hug.

“Thanks a lot for talking to me.” Steve said.

“My pleasure. You take care.” I said.

With that, Steve walked back to his car. And I rejoiced at another opportunity to communicate the gospel to a person in need of Jesus Christ.

I met Bentley and his grandfather Steve while fishing at Pride Lake, in Scott County Park. This is the story of God's gracious providence. A three-Fold Purpose For me, there is a three-fold purpose … END_OF_DOCUMENT_TOKEN_TO_BE_REPLACED