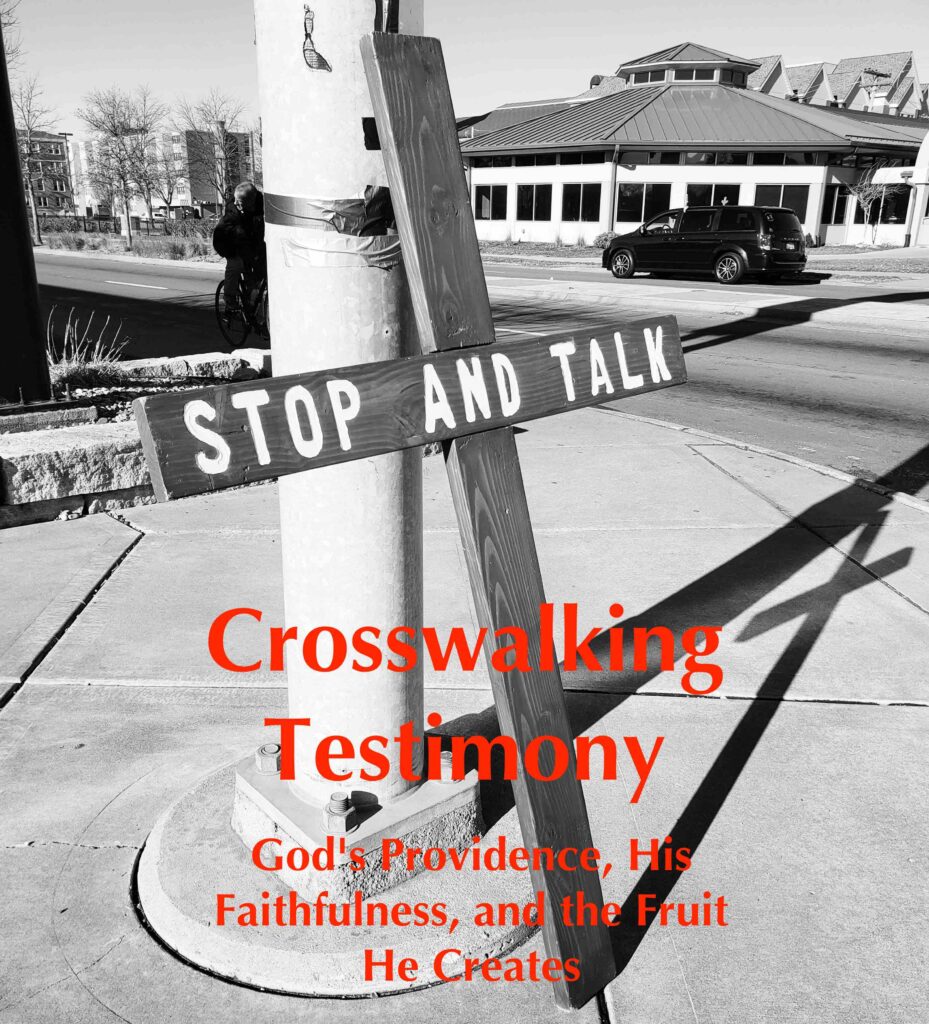 Sometimes the fruit from my crosswalking efforts doesn’t happen on a street corner. Sometimes God’s providence leads to the unexpected.

From time to time, my Morning Devotions broadcast on YouTube is interrupted by an unreliable Internet connection. It has been happening more frequently, as of late. So, I put in a call to my Internet provider and made an appointment for a technician to come to the house.

Today was the day for my appointment.

The technician called me before his arrival to let me know he was on the way.

“What seems to be the problem?” He asked.

I explained the situation to him and he said he would arrive in a few minutes.

The Writing on the Wall

I opened the door as the technician walked up the stairs and invited him to come in.

As he put slipcovers over his shoes, he looked up to a sign on the wall above the stairs leading down to our bottom floor. It reads: “Grateful, Thankful, Blessed.”

“I bet your broadcast is religious,” the technician remarked.

I showed the technician upstairs to our main floor and directed him to our Internet gear.

“My wife’s a strong Christian,” he offered. “She’d read the Bible for hours if she could.”

“That’s what I do on my broadcast,” I said. “I read the Bible. People from around the world join me for prayer and Bible reading. This is my sixth year doing it.”

The technician began checking the router and doing whatever technicians do.

“My wife has a gay brother who’s Muslim. She’s trying to get him to come over to Christianity,” the technician offered.

That’s not something you hear every day.

“You said your wife is a Christian. How about you?” I asked.

“How did you come to faith in Christ,” I asked.

“I was born into it,” he answered.

“But when did your faith become your own? When was it no longer your parents’ faith and you going to church because you had to?” I asked.

“Probably about four years ago when I met my wife,” he answered.

The technician continued his work, explaining to me why he was installing a larger splitter. He paused, gave me a long look, pointed his finger, and said, “Hey; you’re that guy on the corner, with the cross!”

I smiled and said, “Yep; that’s me. The crazy old guy on the corner with a cross.”

“I’ve meant to stop and talk to you a couple of times. What a coincidence that I’m in your house,” he remarked.

‘It’s no coincidence,” I corrected him. “It’s God’s providence.”

“Ya know; I have a video of a wonderful conversation with a Muslim when I was ministering up in Calgary several years ago,” I said thinking about the technician’s wife’s gay, Muslim brother. “Maybe your wife could send it to her brother. It’s an hour-long, though.”

“Oh, she’ll watch the whole thing and then probably send it to her brother,” he replied with assurance.

“Well, if you wouldn’t mind giving me your phone number I will text you the link,” I offered.

The technician started to tell me his number and then paused. “You are one of the very few people who have my number,” he said. He recited the rest of his number.

I texted him the link to the video, which he immediately forwarded to his wife. Moments later he said, “She’s watching it now.”

And just a few moments later, I heard the theme music for my Street Fishing podcast coming from his phone.

“Is this you, too?” The technician asked.

“Where did you find that?” I asked in return.

“My wife just sent it to me,” he answered.

I mentioned that I haven’t done a podcast episode in quite some time and I explained to him the premise of the program.

Thankful for the Fruit of Crosswalking

“My wife is probably going to watch every one of your videos,” the technician asserted.

“Umm; there are hundreds of videos on my channel,” I explained.

As the technician finished his work, I grabbed copies of my books: “Take Up The Shield” and “Cross Encounters.”

I shook his hand, thanked him for the work he did, and told him it was good talking to him. I handed him the books. “Here; these are for you and your wife. I hope they encourage you.”

“You write books, too?” He exclaimed. “Thanks. We’ll read these.”

I saw him to the door and let him know that he shouldn’t hesitate to call on me if I could be of any encouragement to him.

As I watched him drive away, I thanked God for his providence as seen in the way he orchestrated the ministry opportunity I had today. I thanked Him for His faithfulness and for another example of the fruit He created through something as simple as a guy standing on the corner with a cross.

Not long after the technician left my home, he texted me.

“She really likes your videos. She wants to meet sometime so we can all talk.”

I called Mahria to tell her what God was doing and that I was going to invite our Internet technician and his family to dinner.

The giving and receiving of hospitality is a spiritual discipline in which God has graciously allowed Mahria and me to grow. My sister and brother-in-law modeled the discipline well for us, for many years. They are two of the most sacrificially hospitable people I know. Other Christians modeled it, too. But hospitality was never a priority or, if we’re honest, even a desire. As I’ve testified before, it wasn’t until we moved to Iowa and joined Grace Fellowship Church that we learned the importance of hospitality. We learned how wonderfully different (and admittedly sometimes challenging) life can be when you are part of an imperfect community of Christians who believe to the point of practice that God’s command to be hospitable matters.

I continued to exchange texts with the technician in an effort to work out a suitable evening for him and his family to join us for dinner. Then I got this text:

“This is Jane (not her real name). I’m reading your book. Just finished the part about the burglar and the judge. All so good! Can’t wait to meet you. I’ve driven by [you] many times and always said to myself praise God. Maybe [we] can join you some time to do the footwork with you. I would love to.”

In what appears to be more of God’s wonderful providence and faithfulness, we are scheduled to have the technician and his family to our home for dinner, on Saturday.

Mahria, Amanda, and I are looking forward to Saturday evening. I’m looking forward to hearing their testimonies, allowing them to hear ours, and more fully communicating the gospel to them. I hope by the end of the evening we are all affirming each other as brothers and sisters in Christ.

Please pray for us.

Ten years ago I had a conversation with a Boise State University student named Mohammed. The Lord is still using it. A Recent Email Recently, I received an email from a man named Ali--a Christian … END_OF_DOCUMENT_TOKEN_TO_BE_REPLACED