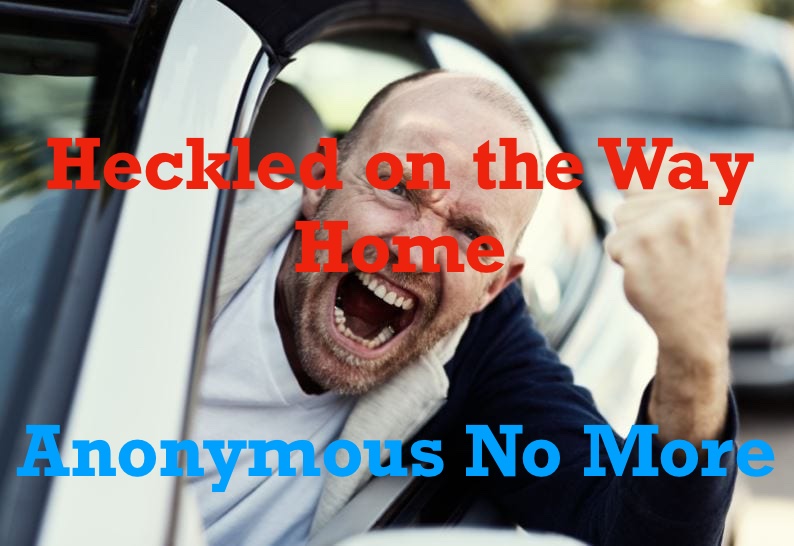 Something happened not long ago–something that filled me with joy and showed me that I cannot live an anonymous Christian life.

Heckled on the Way Home

Caleb and I enjoyed lunch and a couple of games of chess at our local mall. We were celebrating Caleb’s upcoming 15th birthday. Caleb is one of the younger members of our church.

We were heading westbound on Kimberly Road, approaching the intersection where I would make a right turn onto Caleb’s street. It was a nice day (finally) so I had my window down.

As I slowed to make the turn, I noticed a blue sedan traveling eastbound on Kimberly, coming toward us. The vehicle seemed to slow down as if the driver was trying to match my speed. It wasn’t slowing to make a left turn onto the same street. It would continue straight through the intersection. The driver’s window rolled down as the car came closer to us. Working patrol and years on street corners engaging in evangelism have taught me to be cognizant of such things.

As the car passed by, the driver angrily shouted out the window, “Hail Satan!”

The Cowardice of Drive-Bys

There are lots of cowards in the world. Few are more cowardly than the person who does a “drive-by.”

As a deputy sheriff, working in the capacity of a patrol deputy and also as a gang and juvenile crime investigator, I had the occasion to investigate a few drive-by shootings. One, in particular, stands out. It occurred late at night (which is typical), in an area known for gang activity, on the east side of town. A carload of gang members slow-rolled past a group of people as one person in the vehicle fired a shotgun at the group. No one was killed. One person was struck in the ankle by the gunfire.

My partners and I worked for several days to identify the several suspects in the drive-by vehicle.

We finally got a break in the case when we developed information that led to the identification of the driver. My partner Joe and I made the arrest, transported the suspect to the station, booked, and interrogated him. Joe and I developed an effective, even comical ruse, which led to a full confession from the driver, the identification of everyone else in the car, including the shooter, as well as information about the location of the weapon used in the crime.

My other partner John and I (our unit worked well as a team) spent days literally chasing the weapon–a camouflaged shotgun–around town, as it passed from hand to hand. The shotgun eventually ended up in the possession of a man who purchased it, not knowing it was used in a crime, who subsequently got nervous having it in his possession. Not knowing what to do with the weapon, he decided to bury it. He told us where he buried it and we recovered it.

Our investigation resulted in the arrest of five suspects. The case never went to trial. All five pled guilty to felony charges and received lengthy prison sentences. The defense attorneys cited the detail of our investigation and the intricacy of the ruse we employed as a couple of the reasons why they recommended their clients not go to trial.

Anyone who points a gun out of a vehicle and fires it at people is a coward.

Over the last 18 years of street ministry, especially while crosswalking, I’ve been subjected to countless drive-bys. Cowards in cars (men and women) have thrown everything at me from liquids (hot and cold), trash, food, coins, and spittle. More often than not, drive-by hecklers hurl words: “Hail Satan!” “God doesn’t exist!” “Get a job!” “You’re an idiot!” “F— Jesus!” “I oughta stop and kick your a–!”

One angry woman once threw a crucifix necklace at me. And then there was the day when two elderly Hasidic rabbis snuck up behind me and blew a shofar in my ear. Yeah; that actually happened.

Whether with a gun, trolling on the Internet (that’s an article for another time), or with words out an open car window, drive-bys are the work of cowards.

Overjoyed to be “Shot” At

As I made the right turn toward Caleb’s house, I was at first stunned by what had just happened. But as I played the scene again in my mind, astonishment was replaced with excitement and joy.

Why? Why would I be joyful that someone, a stranger, just drove by me, took a verbal shot at me, and shouted, “Hail Satan?”

The Joy of Persecution

“Blessed are you when men hate you, and exclude you, and insult you, and scorn your name as evil, for the sake of the Son of Man. Be glad in that day and leap for joy, for behold, your reward is great in heaven. For their fathers were doing the same things to the prophets” (Luke 6:22-23, LSB)

“Indeed, all who desire to live godly in Christ Jesus will be persecuted” (2 Timothy 3:12, LSB).

When the guy drove by and mocked me (and blasphemed the God he knows) I was filled with joy because Jesus tells me in His Word that such persecution is a blessing–a reason to be glad and leap for joy. The incident reminded me that the world’s hate testifies to the truth that this world is not my home and Jesus chose me out of it. And while I am not as godly as I can or should be, the venom-filled drive-by reminded me that the election of God, the imputed righteousness of Christ, and the sanctification of the Holy Spirit are godliness-producing realities in my life.

Yes, indeed. The drive-by was cause for great joy. Praise the Lord!

The Joy of Lost Anonymity

The drive-by heckler was a stranger to me. However, I apparently was no stranger to him. And he didn’t heckle me while I stood with my cross at one of several intersections in town. He didn’t heckle me outside our community’s farmers’ market. He didn’t heckle me outside one of our local colleges or universities. His drive-by didn’t happen while I ministered outside of my local police department. While traveling at a good speed and coming in the opposite direction (the rate of closure is often double or more than the speed of travel), the man recognized me.

Many professing Christians are enslaved to anonymity because no one recognizes them as Christians:

It’s easy to be an anonymous Christian. That’s why so many professing Christians do it. It’s certainly easier than being a faithful Christian, a godly person. It’s easy to praise the Lord on Sunday in the safety of a church’s sanctuary and then live the anonymous Christian (a contradiction of terms) life Monday through Saturday.

“Indeed, all who desire to live godly in Christ Jesus will be persecuted” (2 Timothy 3:12, LSB).

There’s no way around it. If you are faithful, if you seek to live a godly life, you WILL be persecuted. People will want to kill you–if not actually, in their hearts and minds (John 16:2; 1 John 3:13-15). And how will the world know to hate you? Shed the faux safety of anonymity, open your mouth, and declare Jesus as Lord. Proclaim the gospel. That’s all it will take. And you will be free from the spiritual enslavement that unfaithful anonymity brings.

According to Scripture (see again 2 Timothy 3:12), you cannot live a truly godly life in anonymity. You must give the world a reason to hate you. Children of their father the devil should want to kill you.

With Freedom from Anonymity Comes Responsibility

All those places mentioned above–places where many professing Christians live the anonymous life (work, school, grocery stores, post offices, etc.)–are places where I must exercise appropriate and genuine care to live what I profess to believe.

The person who drives by and waves at me while I’m crosswalking might be standing in line behind me at the grocery store.

The person who drives by and gives me a one-finger wave or slings a “Hail Satan” might be standing in line behind me at the post office.

The person who drives by and does nothing might be the person driving behind me as I’m running errands. Am I speeding? Am I tailgating? Do I flash a frustrated or disgusted look to the person I have to go around because they’re driving slower than I like? Have I just played the hypocrite–smiling and waving while holding a cross, but behaving badly when I’m behind the wheel?

Such responsibility isn’t a burden to a Christian. It’s an exercise of freedom–the freedom the Christian has in Christ.

I’m blessed to be sent out by my church to do the work of an evangelist. It has made it easier for me to lose my anonymity in my community. But you don’t have to be a full-time evangelist to be freed from anonymity. You just have to open your mouth. You just have to live a godly life–a life that, by definition, includes evangelism.

There are no secret ambassadors.

What will you do today to lose your anonymity?

And in what areas of your life do you need to be more godly now that your anonymity is gone?

Ten years ago I had a conversation with a Boise State University student named Mohammed. The Lord is still using it. A Recent Email Recently, I received an email from a man named Ali--a Christian … END_OF_DOCUMENT_TOKEN_TO_BE_REPLACED