Mahria took a day off work this week to sort through, purge, and organize years of family documents. During the several-hours-long effort, she came across some papers I had written during my time as a student at The Master’s Seminary. The stack of papers she handed me included my Letter of Acceptance from the seminary and a paper titled “Philippians 4:6-7 — Overcoming Anxiety and Knowing Peace Through Prayer.” 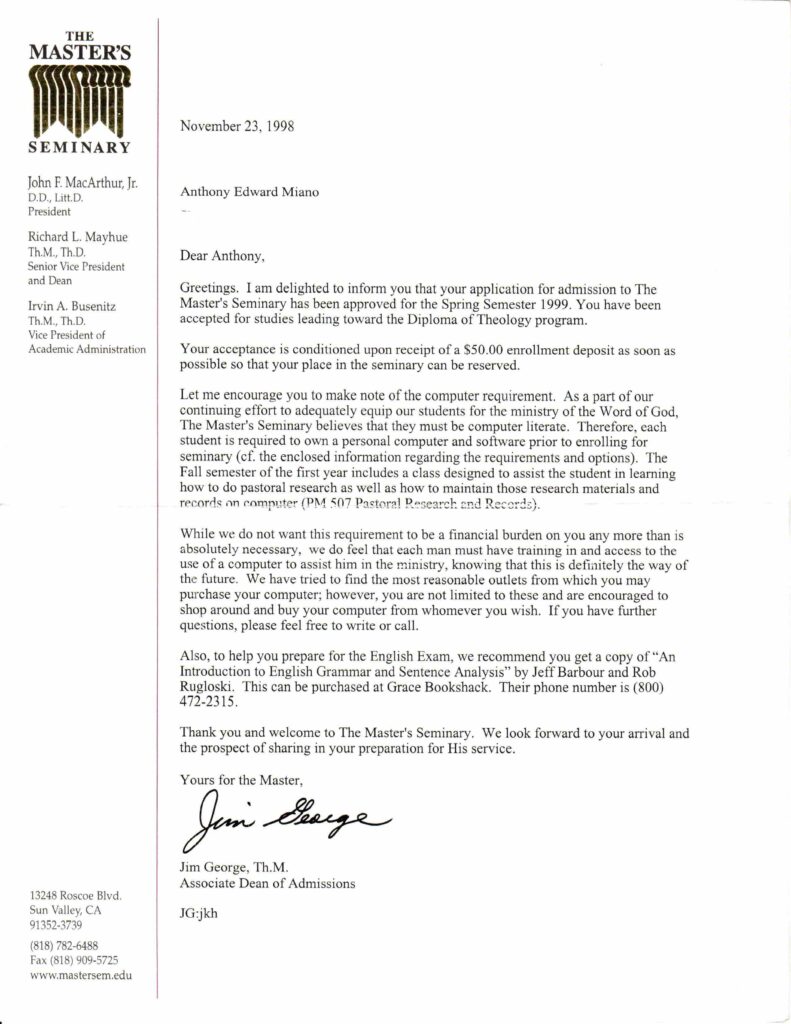 I was 35 years old when my time at the seminary began, which made me older than most of the students. I started seminary with only a high school diploma to my name. My only official college credit prior to my first day of seminary was a one-unit choir class at my local community college. That’s where I met Mahria, my wife of 35 years. When people ask me if I’ve been to college, I quip, “Yep. I graduated with a degree in Mahria.”

All of my “higher learning” took place as a deputy sheriff working the Los Angeles County Jail and a patrol car. While useful in its own way, my law enforcement education did very little for me in the lofty towers of theological academia. I was the proverbial fish out of water.

It had been 17 years since I had seen the inside of a real classroom. The only other time I wore a suit if I could help it was when subpoenaed to testify in court. I remember that first day of my first semester–seeing “the kids” in their suits hurrying from class to class, walking the same grounds as John MacArthur and sitting under his teaching during chapel, awestruck by my first visit to the seminary library. I’m sure I asked myself more than once, “How did I get here?”

Two of my classes during that first semester were Hermeneutics and Biblical Exposition of Prayer. Both were taught by a professor named James Rosscup. Dr. Rosscup went home to be with the Lord last year.

I tried to learn what I could about my professors before the semester started. The run-down on Dr. Rosscup went something like this:

One of the kindest, gentlest, godliest men you will ever meet, but don’t ever be late to class or even think of turning in a paper late. And if you think you’re a good writer, get used to disappointment. No one grades papers harder than Dr. Rosscup.

This compiled student review was backed up with a story.

Thinking Dr. Rosscup would surely give him an extension considering the circumstances, the student picked up the phone (before the days of cell phones) and gave Dr. Rosscup a call. The student, maybe with a winded and pleading tone, explained to Dr. Rosscup that his wife was in labor and that they would soon head to the hospital. The student asked Dr. Rosscup if he could turn in his paper a day late.

Dr. Rosscup congratulated him for the pending birth of his child and just as quickly rejected his request for an extension.

The student tried again to plead his case. He explained that he had completed the assignment, but had not yet typed the paper. Dr. Rosscup again denied his request.

The student hung up the phone demoralized and in disbelief. He and his wife continued to ready themselves to head to the hospital and the student resigned himself to receiving a poor grade for a late paper.

Then came a knock on the door.

The student answered the door to see Dr. Rosscup standing there.

The professor who wouldn’t allow the expecting father extra time to type an already written paper came to the young man’s house to type it for him. The student’s paper was submitted on time.

My First Offering Didn’t Impress Him

I turned in my first paper for Dr. Rosscup’s Biblical Exposition of Prayer class. The assignment was to write an analysis of a chapter from one of E.M. Bounds’ classic works on prayer. I felt what would prove to be overly confident. I doubted the legendary tales of Dr. Rosscup’s level of scrutiny on written work. I had by now met the man and talked with him. He led the discipleship lab of which I was a part. The stories of his kindness, gentleness, and godliness were in no way exaggerated. He was just as kind, gentle, and godly as reported. Maybe more so.

The time had come for Dr. Rosscup to return our papers. He said not a word as he made his way around the long tables, placing papers in front of anticipating students. He placed my paper in front of me.

What could have possibly gone wrong? The assignment wasn’t difficult. Then I read Dr. Rosscup’s note on the paper.

In permanent ink, he gently scolded me for being too harsh toward and critical of the saintly expert on prayer.

I was still in a bit of a Calvinistic cage stage at the turn of the century. I was now a student at the seminary of the man who introduced me to the Doctrines of Grace–Dr. John MacArthur. So, I thought I would impress my professor a bit by slapping around E.M. Bounds for what I thought were Arminian tendencies and leanings in his writings.

Dr. Rosscup was not impressed. Not at all. I don’t recall any other marks on my paper. No spelling or grammar corrections. No corrections regarding Scripture references. My poor grade was the result of a lack of charity for one of the 19th century’s greatest writers on prayer.

One of the most beloved and respected professors at the school, a giant in his own right in the school of prayer, gave me a “C.”

The Lord used the experience to unlock the door and let me out of my theological cage. It’s a cage, unfortunately, I’ve climbed back into a time or two. By God’s grace and with thanks to Him, it seems to happen much less often these days.

At the beginning of the semester, Dr. Rosscup gave us a list of prayer-related subjects from which we could choose our class project. I elected to write an exposition of Philippians 4:6-7.

While I had overcome the poor grade and discouragement that came with my first writing assignment, and while I was doing well in the class, I had no delusions of grandeur. I thought if I got a “B” on this final paper, I might still be able to pull off an “A” for the class. It would be close.

I turned in my paper, on time of course. And, like the rest of my classmates, I waited.

In the Library? What?

I’m sure I prayed as I waited for Dr. Rosscup to place my graded paper in front of me. I’m sure I also corrected myself for praying for something after the outcome, in God’s Providence, had already been determined.

The older man’s hand placed my 12-page paper face-down on the table, in front of me. I slowly turned it over with a wince and with one eye closed, with the hope of softening the blow.

I don’t know if it’s possible to pull an eye muscle, but I’m sure I came close when my eyes launched wide-open.

“A+
Excellent in organization, sources, relating of points.”

Dumbfounded. Speechless. Overjoyed. Hoping it wasn’t a mistake. Quadruple-checked to make sure it was my name at the top of the paper.

I did what was said to be impossible. I received what, at least at the time, was unimaginable: an A+ on a Dr. Rosscup-graded paper.

I couldn’t wait to tell Mahria.

I did my best to conceal my excitement from my fellow seminarians. After all, some of them might have been discouraged when they turned over their papers. And I still didn’t have any delusions of grandeur. While I could probably claim to be the oldest student in the class, I could in no way claim to be the brightest. Not by a long shot. Celebrating and sharing my grade with others would have been untoward, to say the least.

I slipped my paper into my briefcase and sat through the rest of the class. I doubt I heard anything the good doctor said that morning.

I returned to school the following week to expressions of congratulations, handshakes, and pats on the shoulder from a few of my fellow students. It wasn’t until it had happened a couple of times that I asked a well-wisher why he was congratulating me.

“For your paper in Dr. Rosscup’s class,” was the response.

“What paper? What about my paper?” I asked.

“You’re paper is in the library!” The student, almost incredulously, exclaimed.

“Why is my paper in the library?” I asked.

“Dr. Rosscup has made your paper available in the library to serve as an example of how to write a paper for his class,” the seminarian answered.

I’m sure I looked at the young man standing in front of me as if he was talking jibberish.

So, I have one claim to fame from my incomplete (that’s another story) seminary career. I wrote a near-perfect paper for Dr. James Rosscup.

Seeing my paper for the first time in many years brought back a flood of memories–almost all of them good.

It’s been 22 years since I wrote that paper. I’ve lived a lifetime during that 22 years. And there have been many times I have drawn from Philippians 4:6-7 for comfort, care, correction, and confidence.

I don’t want to share my paper with you so that I can boast about some academic achievement, small as it might be. I want to share it with you in the hope that there might be an encouragement in it, for you. 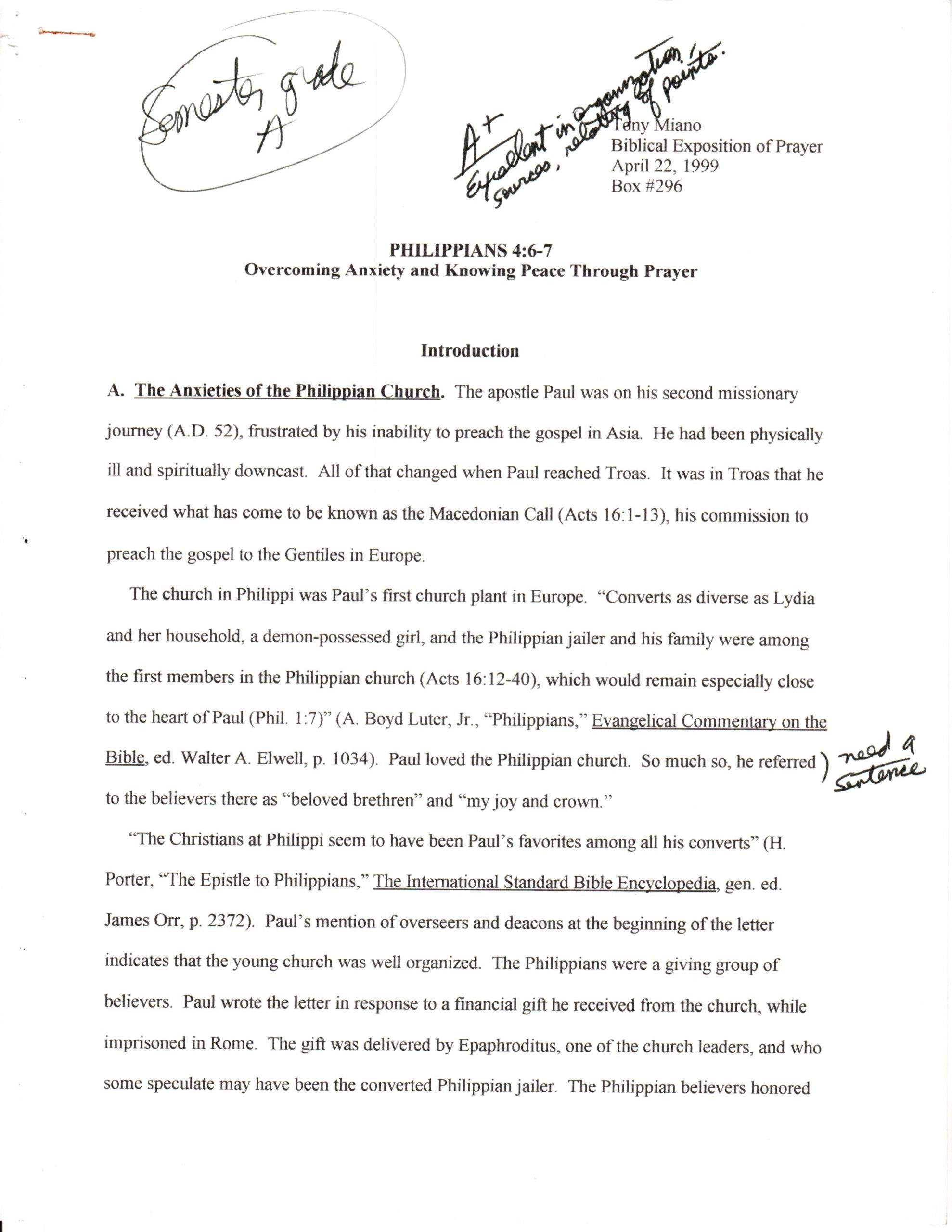 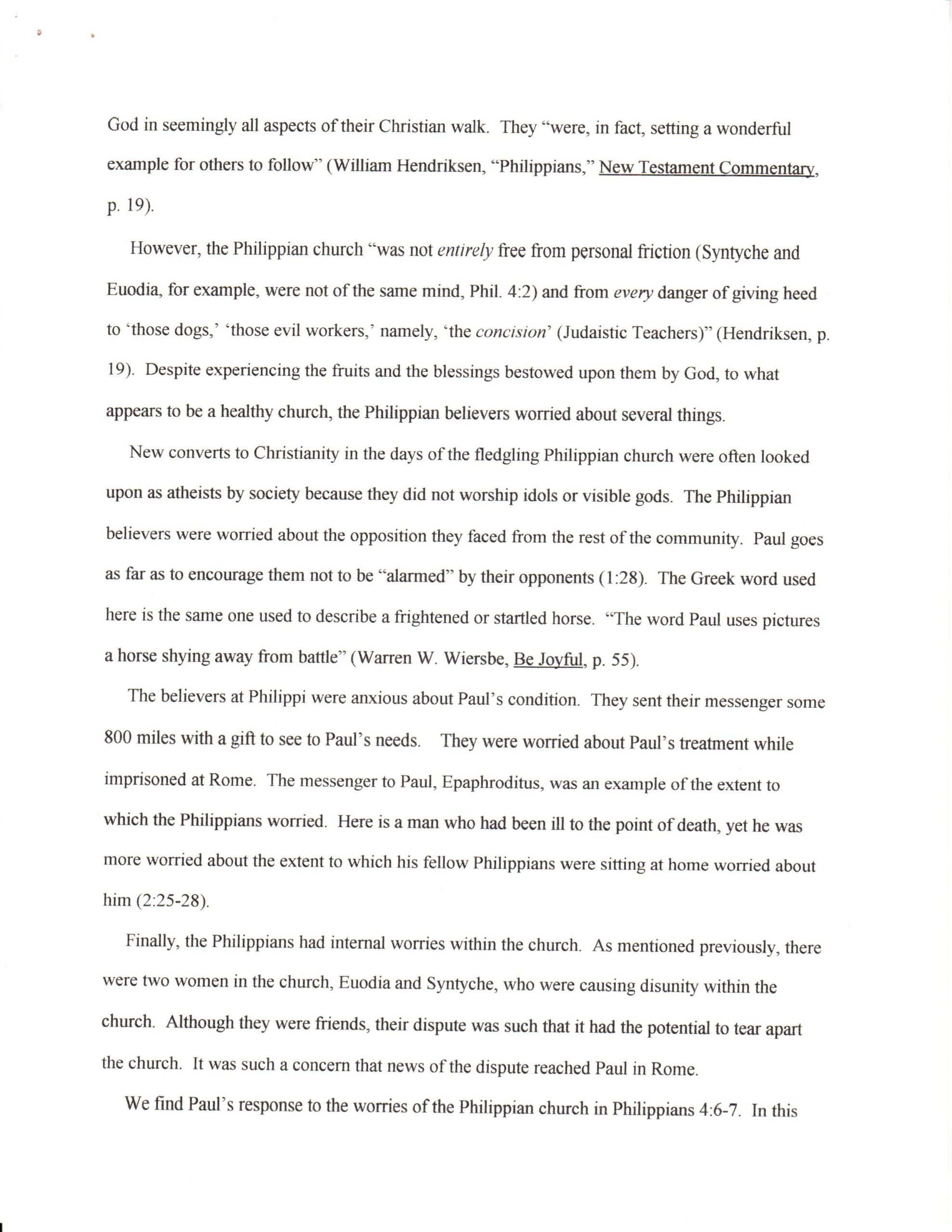 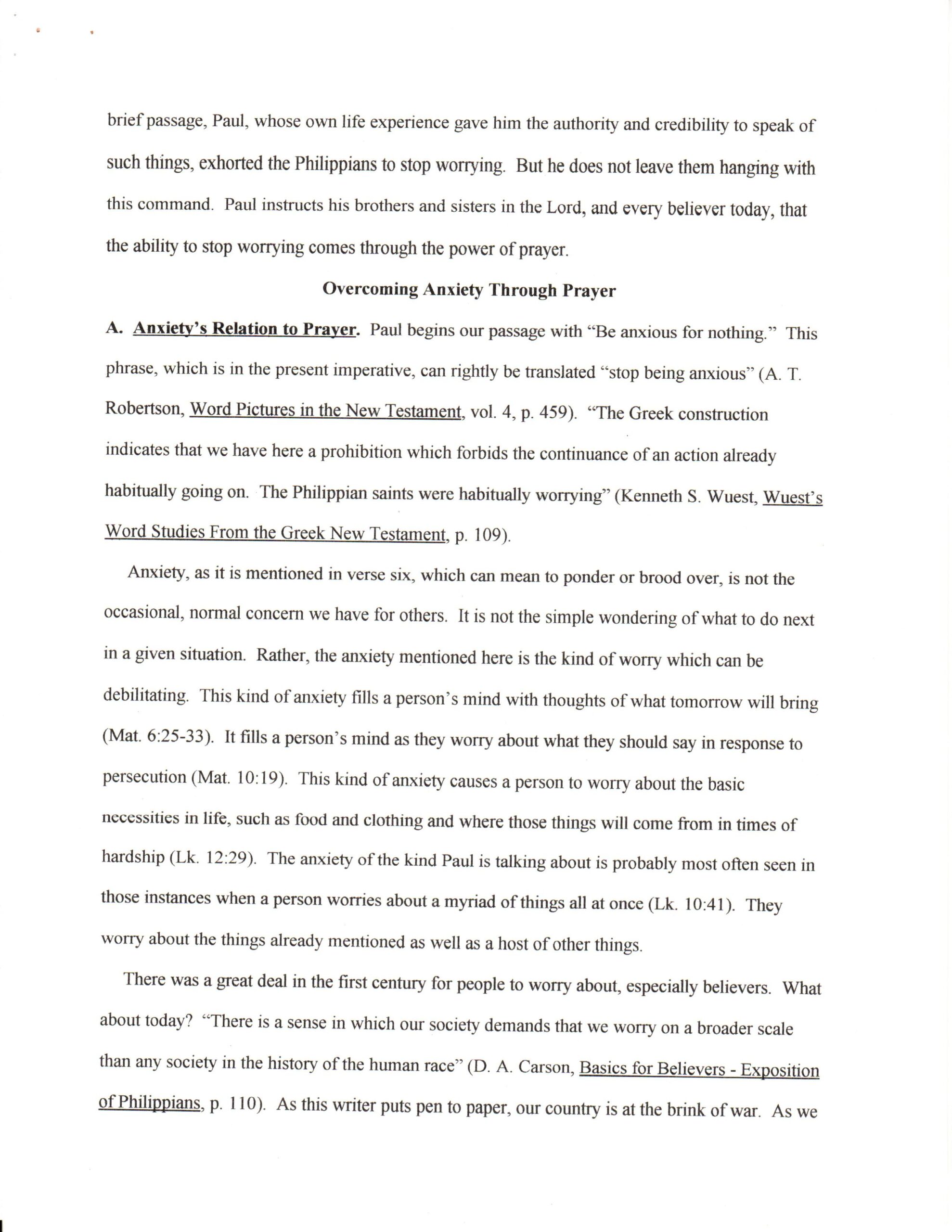 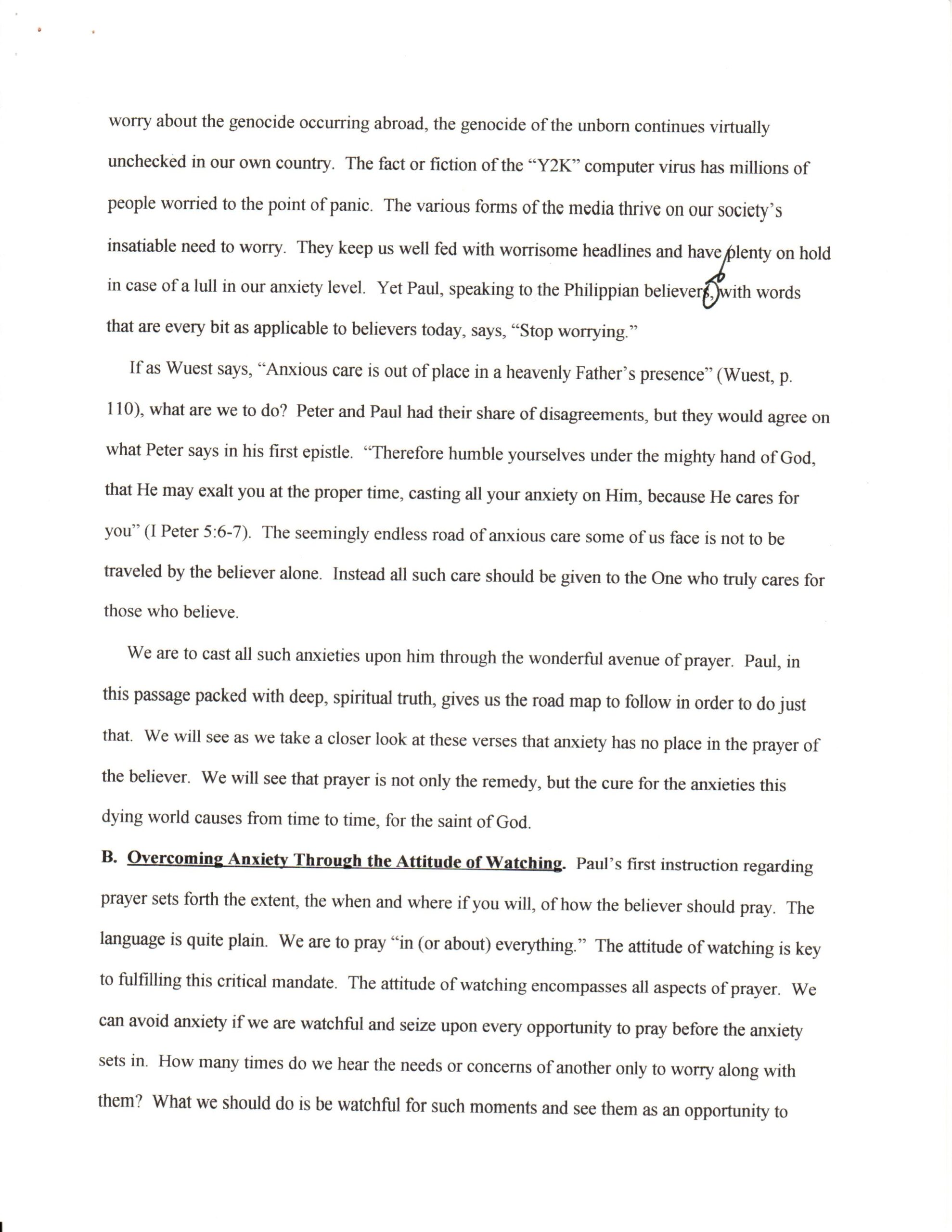 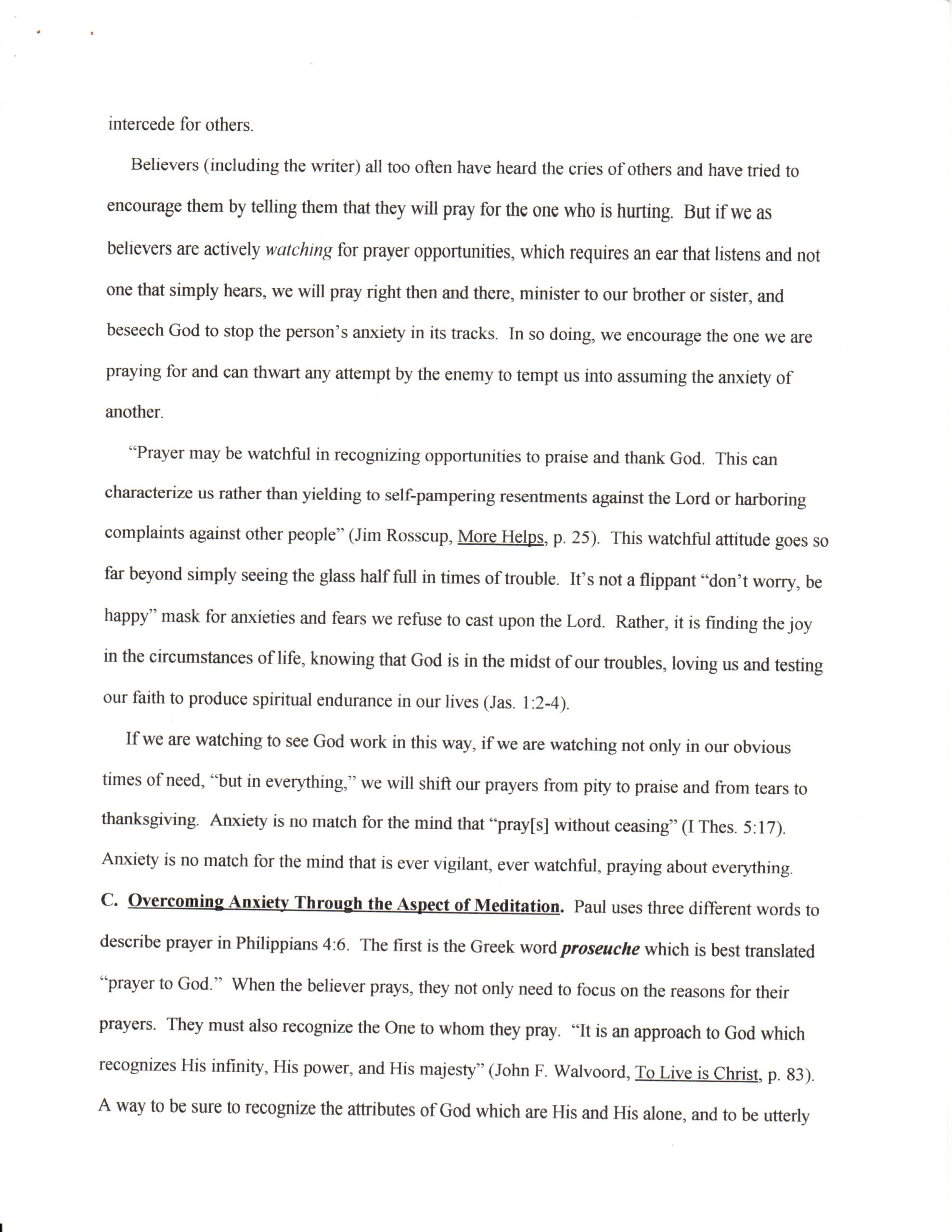 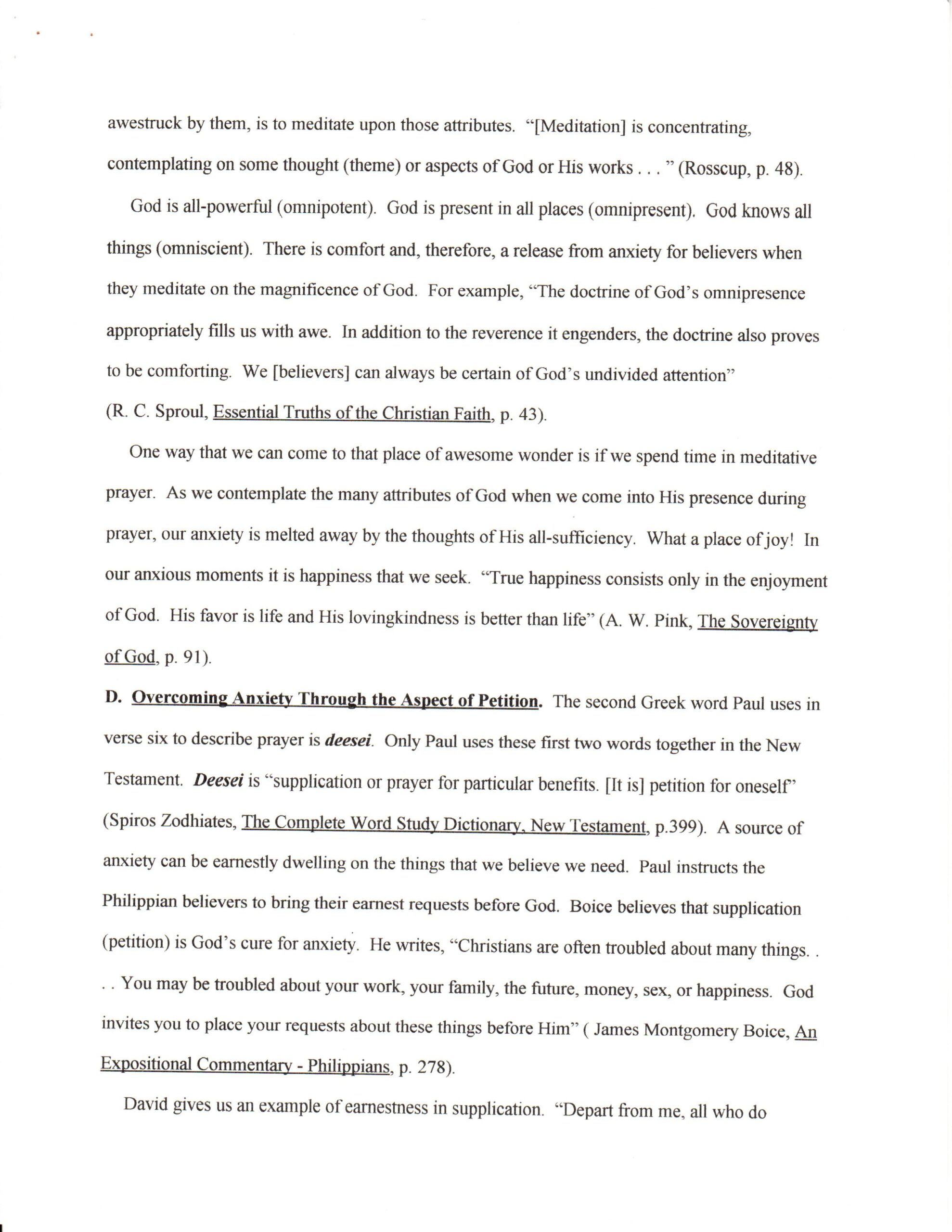 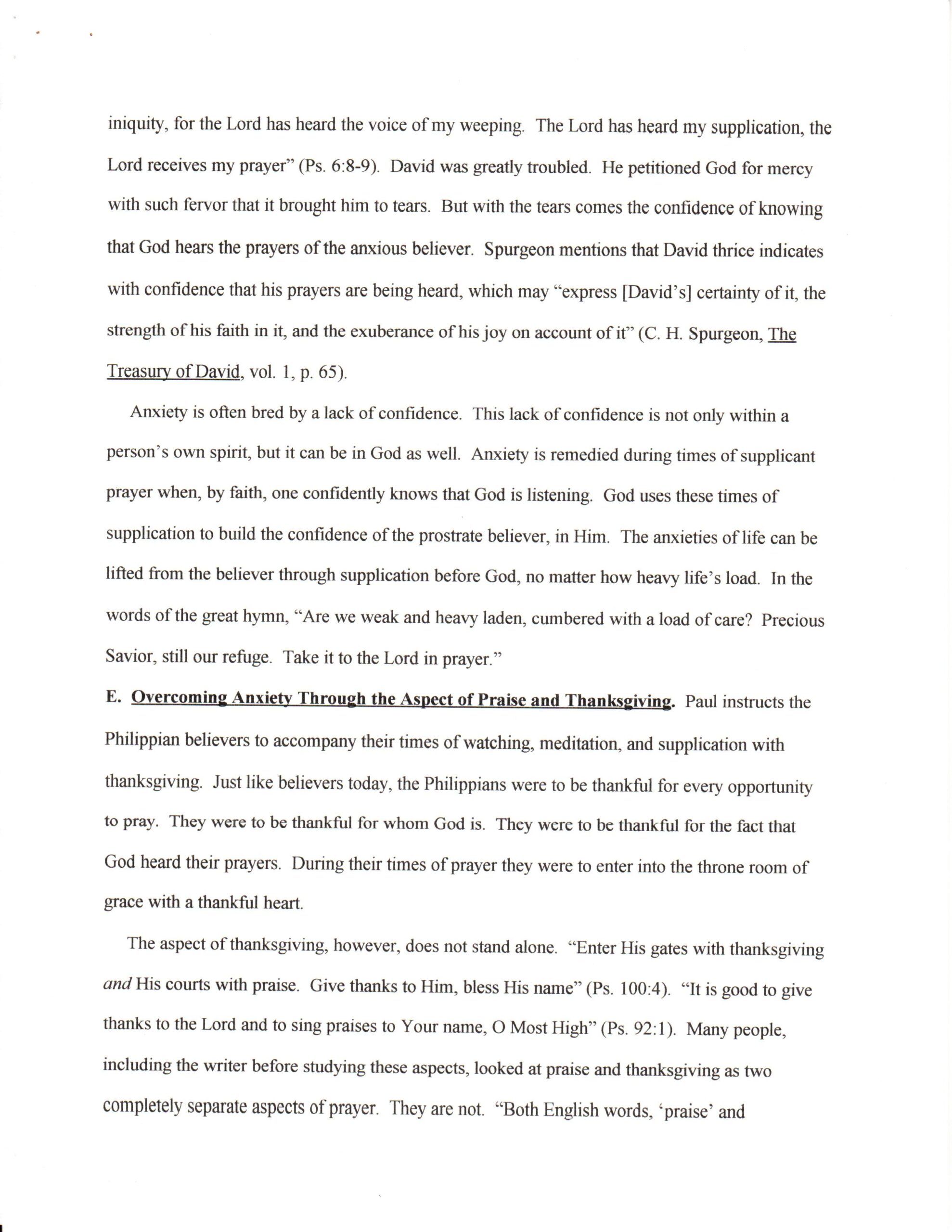 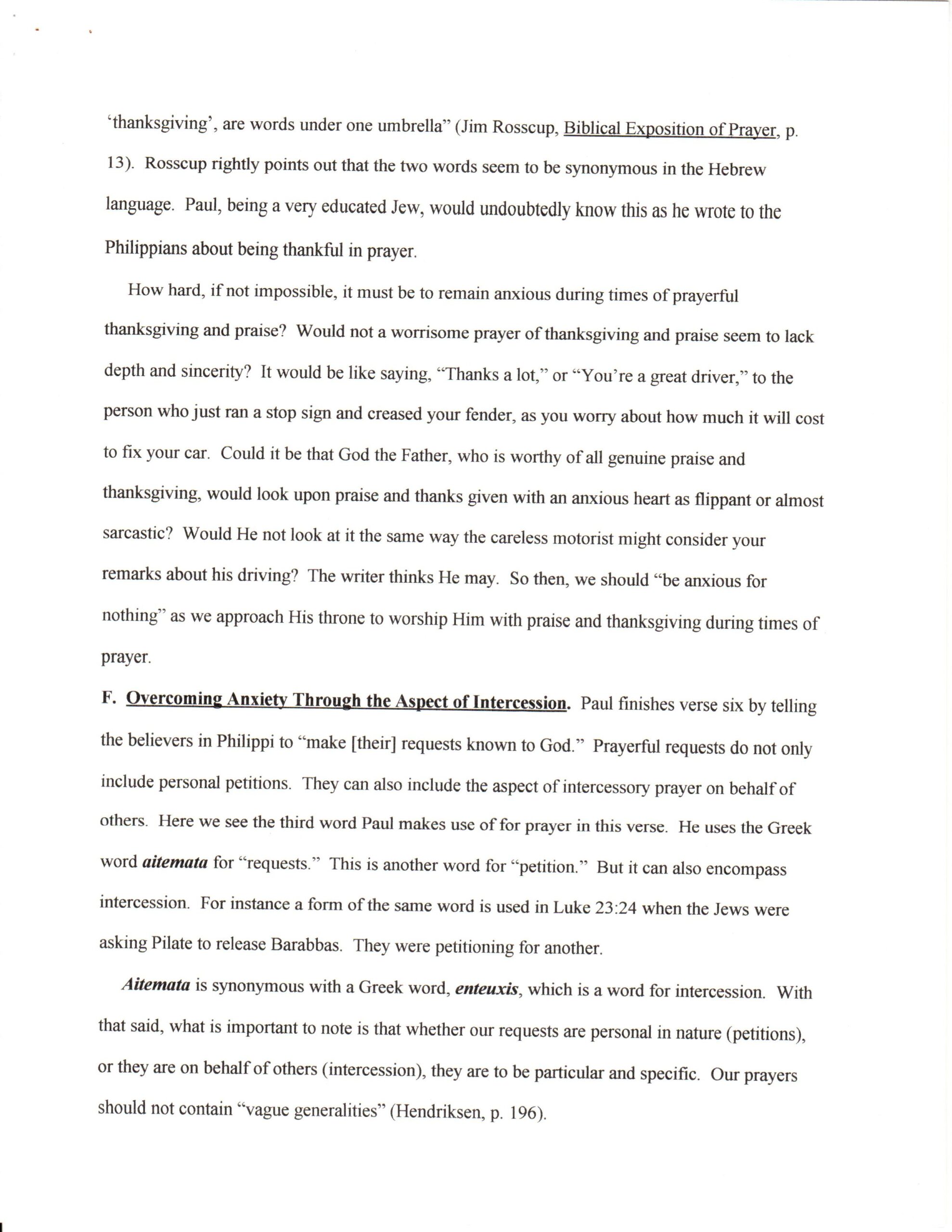 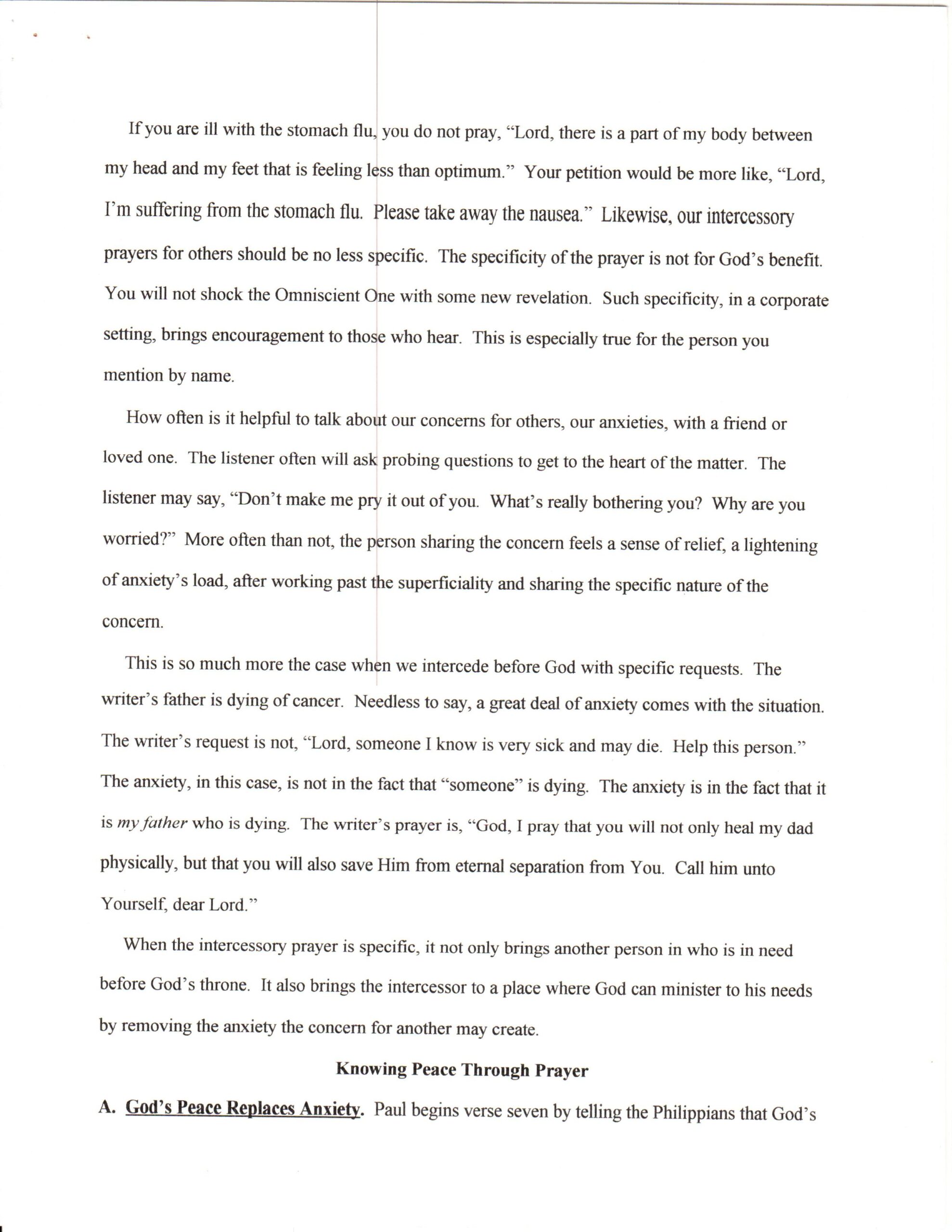 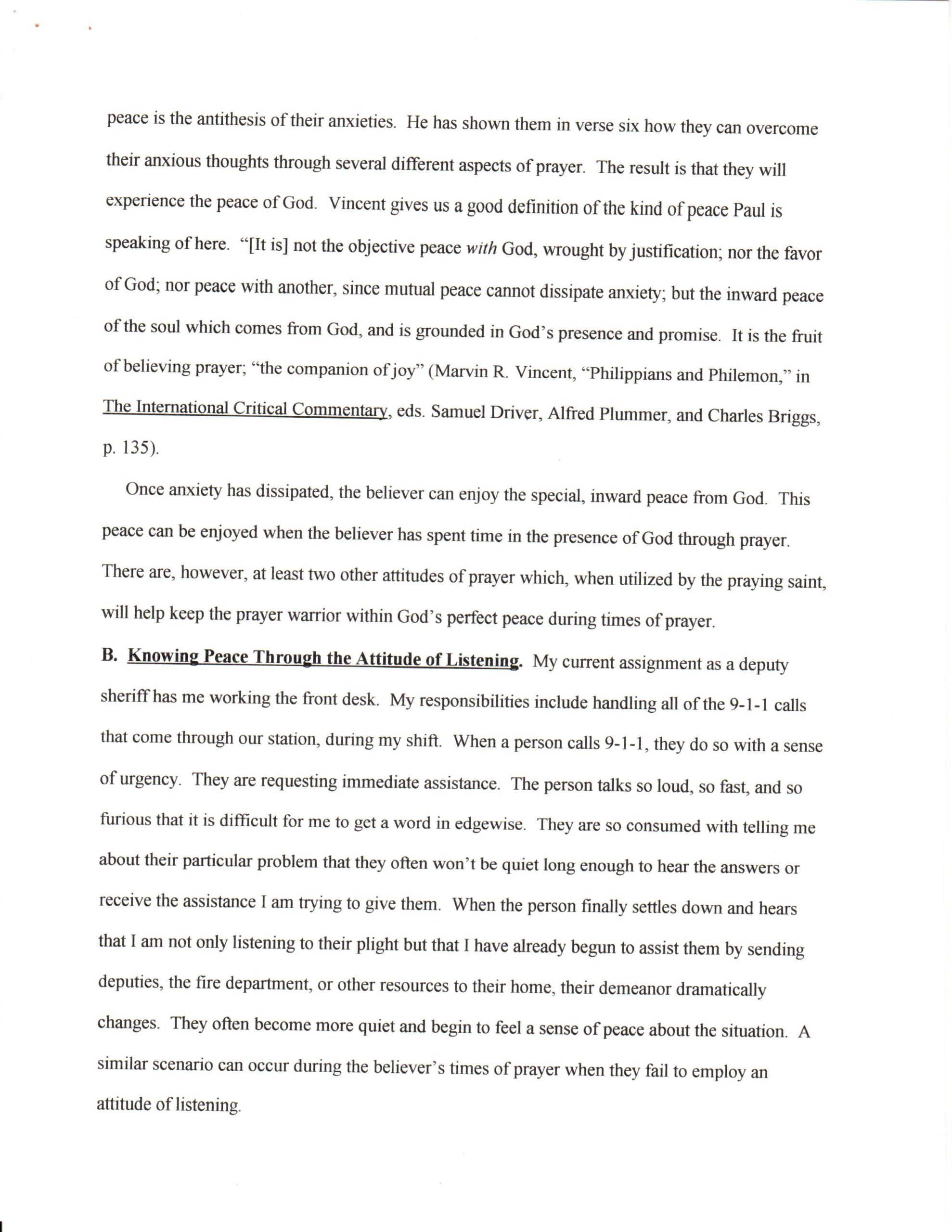 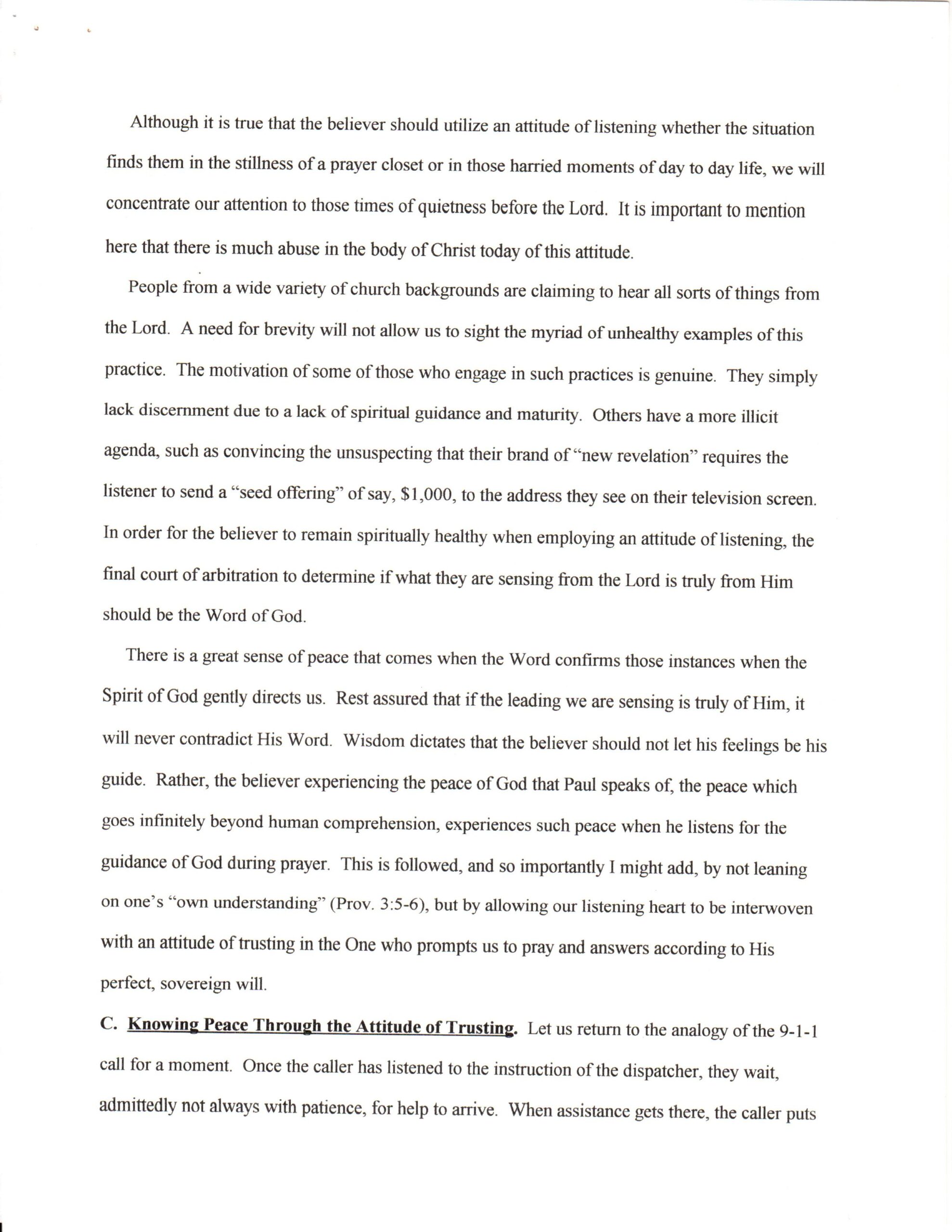 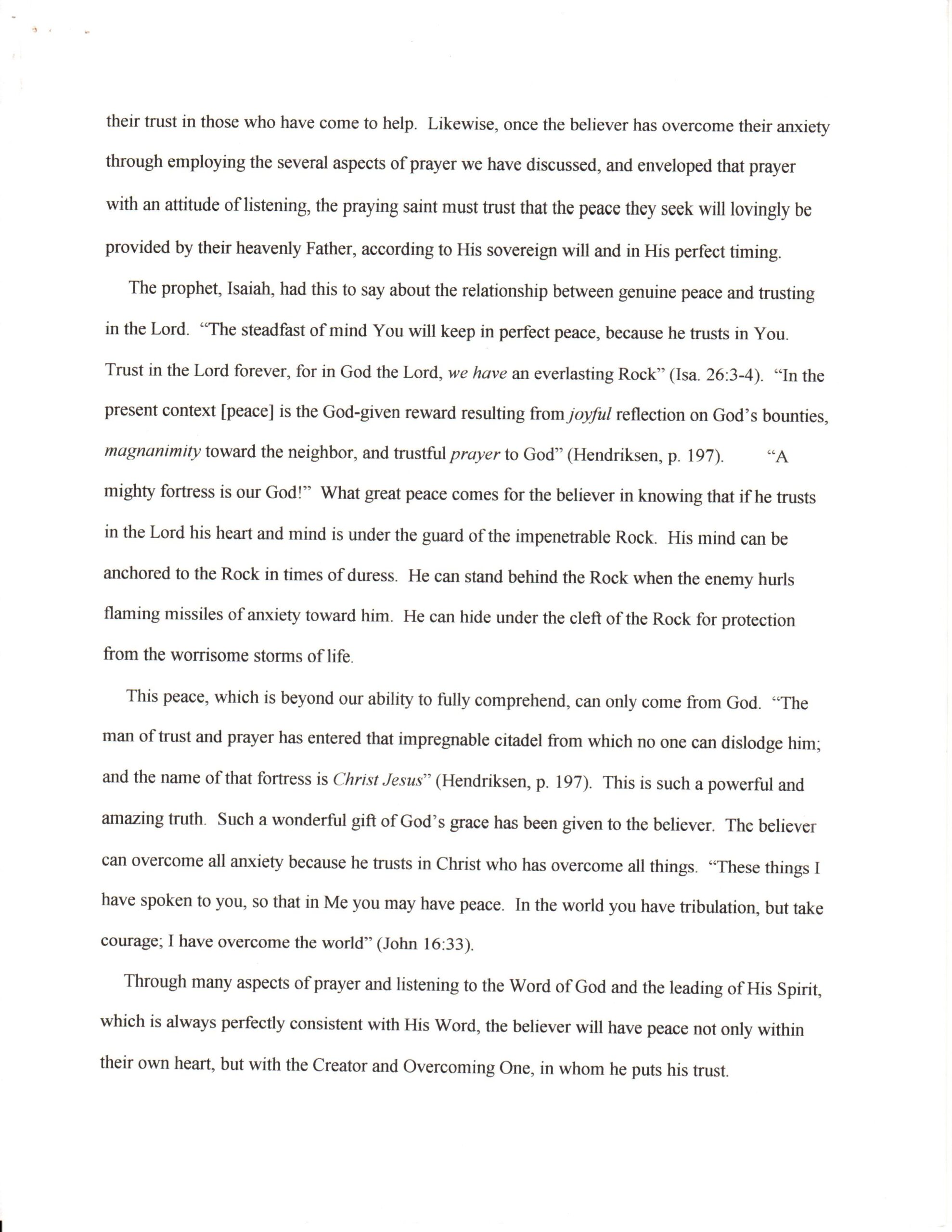 Ten years ago I had a conversation with a Boise State University student named Mohammed. The Lord is still using it. A Recent Email Recently, I received an email from a man named Ali--a Christian … END_OF_DOCUMENT_TOKEN_TO_BE_REPLACED