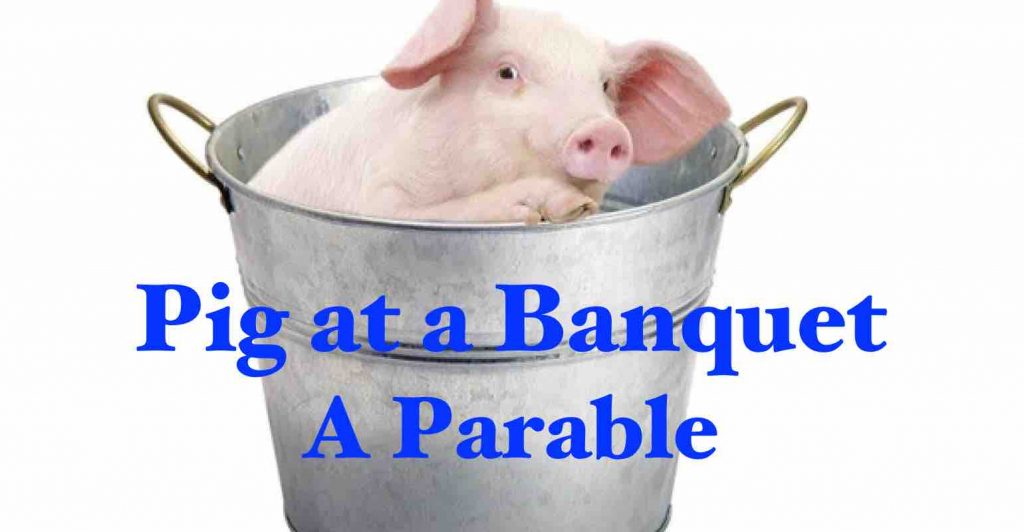 I recently used a modern-day parable to encourage a young man struggling with sin. It involved a pig at a banquet. Maybe it will encourage you.

Nothing New Under the Sun

In all likelihood, I’ve never had an original thought. This truism likely applies to the extra-biblical parable I’m about to share. While I’ve made it my own over the years, meaning I’ve added my own voice and imagery to the story, if this parable originated with someone else I have no idea to whom credit should go.

I’ve used this parable on several occasions to help professing Christians better understand the doctrines of sin, sanctification, and salvation. More often than not, the circumstances that lead to using the parable are conversations with people who are struggling with reoccurring sin and struggling with assurance of salvation. I believe this parable is useful and stops short of giving a false convert false hope or stripping the genuine Christian of the hope he should have.

Since I’m taking the time to write out this parable, I’ve taken the liberty to add a few more details beyond what I might share in a conversation.

With the above in mind, here’s the Parable of a Pig at a Banquet.

Pig at a Banquet

A farmer checked the mail one day to discover he had received an invitation to a banquet. While he didn’t personally know the host, he was familiar with him. The host was a very rich man known for random acts of generosity such as inviting complete strangers to his palatial home for fun, food, and fellowship.

Upon closer inspection, the farmer discovered that he was allowed to bring a guest. As wealthy as the rich man was, our invitee was eccentric and a bit of a loner. He couldn’t think of anyone to ask to accompany him to the banquet. Then he had an idea–a rather odd idea.

“I’ll take my pig,” the farmer said to himself.

It was the day of the banquet, which was a black-tie affair. The farmer dusted off his tux and had one custom-made for his pig. After giving the pig a good bath and dousing it with cologne, he dressed the pig in its tux. The pair was quite a sight.

“I’m here for a banquet,” the farmer replied, proudly handing the security officer his invitation.

Seeing that the farmer had a legitimate reason for being there, he opened the gate and waved the farmer through. “Enjoy the banquet, sir!”

As the truck pulled past the guard shack, the security officer got a better look at the pig. A startled look formed on his face when he saw the pig was dressed in a tux.

The farmer pulled into the large, circular driveway of the mansion. He was awestruck by the size of the home. As he came to a stop, one of several valets opened his door and welcomed him. The man stepped out of his truck, walked to the back, and lowered the tailgate. “Come on, pig. Let’s go.”

Needless to say, the tuxedoed pig had everyone’s attention.

The time came for the guest to join their host at the banquet table. The farmer made his way to his assigned seat. The open seat next to his was for his guest, the pig.

The farmer, with some strain, picked up the pig and placed it on the seat. On the floor next to the seat, the farmer placed a bucket full of foul-smelling pig slop. This got the other guests’ attention, too.

Glances, stares, and murmurs were directed toward the farmer and his pig.

A disciplined and well-dressed wait staff filled water glasses and began to arrange several courses of food in the center of the long, well-appointed table. Shortly thereafter, a dinner bell was rung and the host asked the Lord to bless the meal and the fellowship around the table.

Before taking his first bite, the farmer encouraged his pig to eat what was on the plate in front of him. However, the pig was distracted, not by the cacophony of sound around the table, but by the bucket of slop only a pig could love on the floor at his side. The pig glanced at the plate of food fit for human consumption and then at the bucket of slop on the floor. Back and forth the pig’s attention went for the next couple of minutes. He didn’t touch the food on the plate.

Finally, it became too much for the pig to bear. So, according to his nature, the pig jumped from the chair and shoved his head deep into the bucket of slop. The pig could easily be heard rooting and chomping over the sound of the table conversation. The noise the pig was making brought all conversations to a temporary lull as everyone’s attention turned once again to the pigging-out porker. People began to lose their appetites as the pig indulged his.

The host, although a good distance away at the head of the table, saw what the pig was doing and the effect it was having on his other guests. The host and the farmer made eye contact. The farmer could tell the host did not approve of what was happening.

Without a word, the host did something that many who were not at the banquet find, to this day, hard to believe.

No sooner had the pig become a man that the new man pulled his head out of the bucket and immediately began to vomit the slop in his stomach. He grabbed the expensive, linen napkin from the table and wiped the slop off his face. He swished water from his glass in his mouth and spit the contents onto the floor. The new man wasn’t worried about manners. He still had to learn those. He just wanted to get rid of the disgusting mess in his mouth.

The new man soon settled down, came to his newfound senses, and quietly sat at the table. The farmer, stunned and speechless like everyone else, quickly taught the new man how to use utensils.

The rest of the guests resumed their glances, stares, and murmuring, but now the conversation was distinctly different from what it was when a pig sat at the table. Now, the topic of discussion was speculation about how the host did it–how he changed a pig into a man. Before long, the concensus was the host performed a miracle. He simply willed the pig to become a man. There was no other explanation. The pig and the farmer certainly had nothing to do with it.

The new man enjoyed the gourmet meal in front of him. Occasionally he would look down in disbelief at what remained of the bucket of slop. “How could I have ever wanted that?” He thought. “Never again. Never again.”

Everyone was fascinated by the new man. The conversation turned light-hearted and jocular. At one point, the new man laughed so hard that he fell off his chair. Failing to catch himself, he landed head-first in the bucket of slop. As soon as his head hit the bucket, he violently removed his head from the bucket and used the sleeve of his tuxedo to wipe the slop from his face. Even though he hadn’t swallowed any of the slop, the urge to vomit was overwhelming.

The new man quickly returned to his seat and apologized to the other guests for the distraction. He then turned to the farmer and asked, “Can you get rid of that bucket. i don’t want it anywhere near me. It reminds me of who I once was and I don’t want to fall into it again.

The farmer smiled, politely asked to be excused from the table, picked up the bucket, and walked it out to his truck. He returned soon thereafter to enjoy the rest of the meal with the new man, the host, and the rest of the dinner guests.

It certainly was a banquet to remember.

How would you use this parable?

Let’s discuss it in the comments section below.

Today I was blessed with the opportunity of preaching the chapel message at Unity Christian School, in Fulton, IL. The invitation came through the school's choir director, Paul Hopkins. My … END_OF_DOCUMENT_TOKEN_TO_BE_REPLACED