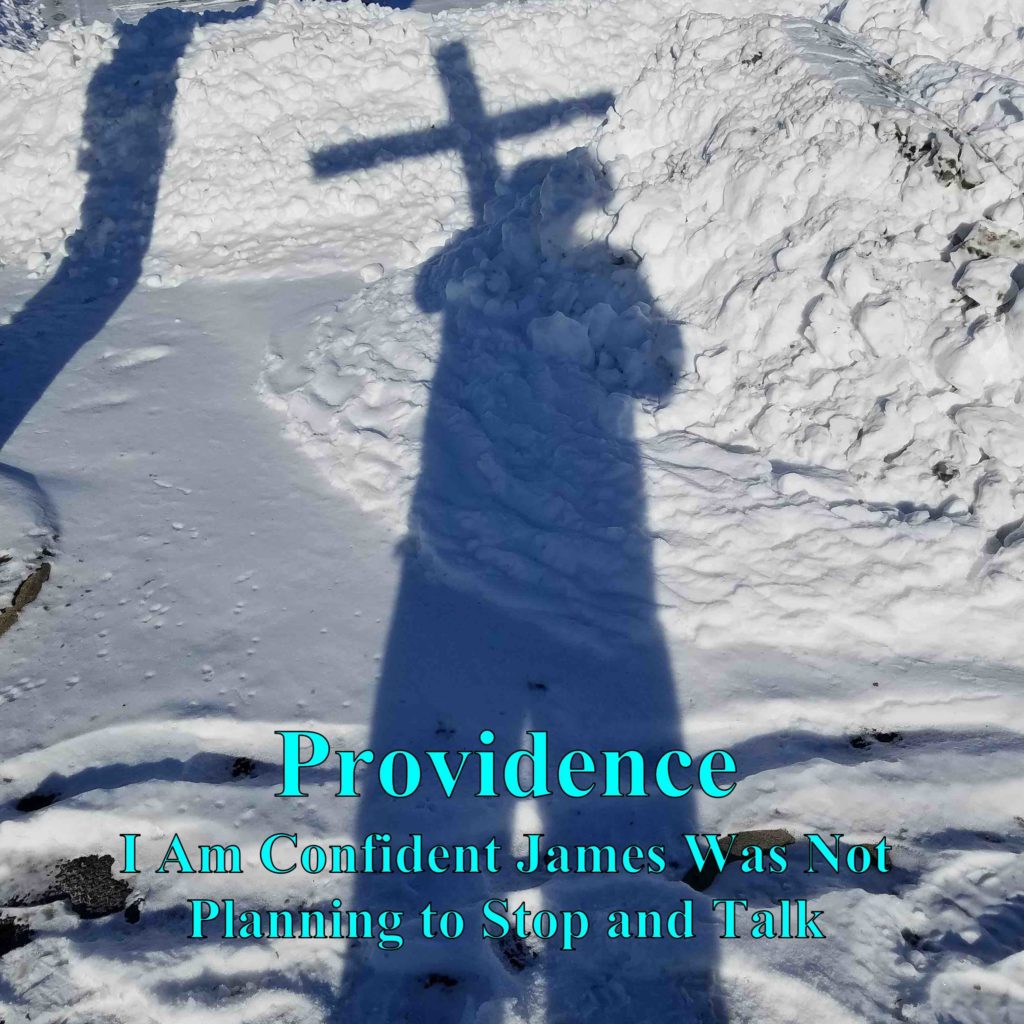 The skies were clear. The sun was bright. There was a gentle breeze. And it was bitterly cold. It was only 11 degrees. I would soon meet a young man named James. I’m quite confident James was not planning to stop and talk to me. I’m no less confident that our meeting was a visible example of God’s divine providence.

The 1828 edition of Webster’s Dictionary (every home should have a copy) defines “providence” this way:

My church’s confession of faith (largely based on the 1689 London Baptist Confession), defines the term this way:

“God, the great Creator of all things, does uphold, direct, dispose, and govern all creatures, actions, and things, from the greatest even to the least, by His most wise and holy providence, to the end for which they were created, according to His infallible foreknowledge, and the free and immutable counsel of His own will, to the praise of the glory of His wisdom, power, justice, goodness, and mercy.”

It is with the above definitions in mind that I now share with you a testimony of God’s providence.

An evangelist with more than 40 years of experience has often said, “Sometimes I leave the house dragging my feet, but I come home clicking my heels.” He was speaking about street evangelism.

My personal experience allows me to affirm this evangelist’s assertion. I, too, have often left the house dragging my feet, only to come home clicking my heels. There have been times when my wife, Mahria, has had to gently prod me to go and do the work of an evangelist. My helpmate wonderfully completes me in this area. It never seems to fail. At those times when I have left the house dragging my feet, I have come home clicking my heels with a story to tell Mahria. Today was one of those days.

Now that I am officially an Iowan (I’ve arbitrarily decided that a year of residency allows me to assume the title), I’ve come to realize just how spoiled I was living in Southern California. Roughly 360 out of 365 days each year were near perfect for street evangelism. I now live in an actual four-season climate where inclement weather is a way of life, during more than a quarter of the year.

It was cold enough today that it would have been easy to stay inside, write some letters or a blog article, or handle some ministry administrative tasks. My elders wouldn’t have minded. I doubt anyone in my church family would have faulted me. In fact, I’m confident inclement weather will keep me off the streets from time-to-time this winter.

However, I couldn’t shake the feeling, subjective as it was, that I needed to be out on the streets, if even for a short time. Even my subjective feelings are subject to God’s providence.

I love every aspect of evangelistic ministry in which I am engaged: open-air preaching, gospel tract distribution, one-to-one conversations, abortuary ministry, sign evangelism, and special events (sports, parades, etc.). However, the aspect of evangelistic ministry that has resulted in some of my most meaningful and interesting encounters with lost souls has been cross-walking.

Bundled from head-to-toe, I pulled my “Stop and Talk” cross out of the back of my car. I took my usual position on the corner of Locust Street and Marquette Street, in my home city of Davenport (IA). Hoisting my cross to a shoulder arms position, I began to wave to passing motorists.

At times the glare from the low, bright, winter sun made it difficult to see inside the passing vehicles. Since I waved to just about every car, I reply to those who show any form of kindness (a wave, a thumbs up, or a smile) by bowing my head. This lets the person inside the vehicle know that I saw their kindness.

Providence Coming Down the Sidewalk

I watch the traffic lights while cross-walking. I position myself to face whichever direction of travel has the green light. Doing this allows for the most motorists to see my cross, my waving hand, and my smiling face (although today most of my face was covered by a knit mask).

I turned west to face the eastbound traffic on Locust Street. Coming toward me on the sidewalk, on the north side of Locust Street was a young man on a bicycle. Like me, he was dressed for the weather.

The cyclist was traveling at a pretty good clip, considering the hard snow and invisible ice on the sidewalk. Within moments he was crossing Marquette Street. I wanted to make sure he had plenty of room to ride by me, so I stepped back off the sidewalk, into a small pile of snow.

The bike reached the handicap sidewalk ramp at my corner and immediately it hit a patch of ice. The cyclist lost control. His bike started to slip out from under him. He hit the brakes, which resulted in him being flung over the handlebars. He hit the ground with a loud thud.

All of it was divine providence: deciding to go cross-walking, being there at that time, the cyclist riding down the sidewalk when he did and losing control of his bike. There were no coincidences. Nothing was left to chance. God ordained what just happened in front of me, as part of His divine, unforeseeable plan.

The cyclist hit the ground close enough for me to reach out and grab his arm. I helped him to his feet and dusted him off. I asked him if he was okay.

“Are you sure? It looked like you hit your head.” I inquired.

“My name is Tony.” I said, extending my hand.

The cyclist shook my hand and said, “I’m James. Thanks for your help.”

I reached into my pocket and removed a gospel tract. The elders of my church have written and produced a few tracts. This particular tract is my favorite of the group. The tract’s simple title is “The Gospel.” It’s a beautiful trifold tract. It’s sturdy, colorful, succinct, detailed, biblical, and complete with our church’s information.

Near Loss of Life; Loss of Loved Ones

James looked at the tract, read the title, and said, “I lost two of my aunts and one of my uncles in the last week.”

I was taken aback by his response.

“Whoa. I’m sorry to hear that, James. Were you close to them?” I asked. I put my hand on James’ shoulder to console him.”

“Yeah, I was.” James replied, as he dropped his head to his chest.

James didn’t tell me how his three relatives died. It didn’t matter. The young man in front of me was hurting and he just experienced his own brush with death, whether he realized it or not.

James put his hand on my shoulder. “I’m definitely going to read this.” He said.

“Please do, James.” I replied.

“Well, I gotta get to work.” James said.

James made several attempts to put the gospel tract in his coat pocket. His heavy gloves made it difficult. I took the tract from his hand and slipped it into his pocket.

“Be careful. Stay upright.” I counseled.

“I will.” James answered.

James hopped onto his bike and rode away.

I prayed for his safety and his salvation.

A Story of God’s Providence

I pulled into the driveway. I jump-started both of my daughters’ cars (frozen batteries) before going into the house. We former Californians are still learning the Iowan ropes. Mahria was waiting for me at the door.

“It went great. I’ve got a neat story about God’s providence to tell you.” I said.

“God, the great Creator of all things, does uphold, direct, dispose, and govern all creatures, actions, and things, from the greatest even to the least, by His most wise and holy providence, to the end for which they were created, according to His infallible foreknowledge, and the free and immutable counsel of His own will, to the praise of the glory of His wisdom, power, justice, goodness, and mercy.”

Today I saw the great Creator uphold, direct, dispose, and govern James and I by His wise and holy providence. God ordained all that I experienced with James, according to His infallible foreknowledge and the free and immutable counsel of His own will. To the praise of the glory of His wisdom, power, justice, goodness, and mercy, God Almighty ordained James to crash his bike in front of me. He did it, so it appears, so that James would receive a moment of empathy and a gospel tract.

God is good and greatly to be praised. May He receive all the glory for and from this testimony.