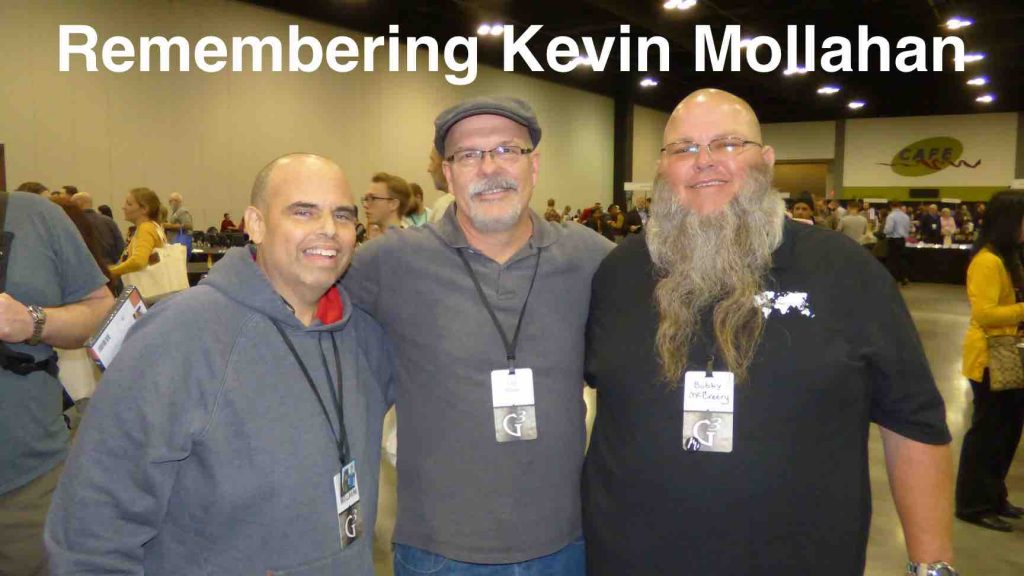 Kevin Mollahan loved the Lord; he loved the lost, and he loved to reach them with the gospel by distributing gospel tracts.

My Friendship with Kevin Mollahan

In 2007, part of my ministry was co-hosting a radio program (Last Words Radio), on KKLA, Southern California’s largest Christian radio network. Sounds impressive, doesn’t it? The show aired Saturday nights at 10:30 PM–the time of day when only close friends and family listen to your radio show because you asked them to.

One of our faithful listeners was someone from Topeka, Kansas, of all places. In our chat room, he went by the moniker “Zookeeper Kevin.” Kevin was a faithful listener (one of the few). He would call into the program with questions about evangelism and invariably had something encouraging to say.

That’s how I met Kevin Mollahan.

From 2008-2012, I served with Living Waters as the director of the Ambassadors’ Academy. I invited Kevin to participate in the academy in 2009 and again in 2010.

I’ve known Kevin for about a dozen years. Over the years, our friendship grew. Even though we would see each other only occasionally, usually at Christian conferences, we stayed in touch on social media. From time to time, Kevin would send my family a word of encouragement, in a card. And each year at Christmas-time we would receive a card–always with a Peanuts theme. My entire family grew fond of Kevin.

Kevin was a very kind and gentle person. He truly had the gift of encouragement. I loved him, as my brother in Christ. I still do. And I will see him again, in heaven.

Kevin Mollahan loves the Lord; he loved the lost, and he loved to reach them with the gospel by distributing gospel tracts.

Remembering My Friend with a Gospel Tract

I’ve given much thought to who Kevin was (a sinner saved by grace), who he is today (a fully glorified saint), and where he is now and forever (heaven worshiping his King). I thought an appropriate way to memorialize my friend would be to create a gospel tract that would honor his memory and encourage other Christians to do as Kevin did. I titled the tract “Kevin’s Message to You.”

Here is the text for the tract:

“Kevin Mollahan, known by family, friends, and in his profession as ‘Zookeeper Kevin,’ died on Sunday, December 8, 2019. He was 52 years old. As a zookeeper, Kevin loved black bears. However, Kevin loved God and people more than he loved bears. He loved Jesus and he loved to tell others about him. Kevin’s favorite way to tell people about Jesus was by distributing cards like the one you are holding. If Kevin could say anything to you right now, it would be this. Don’t miss heaven. One day you will die and stand before God, your Creator. On that day, God will judge you by the perfect moral standard He has written on your heart—His Law. God has given to you something He has not given to either black bears or the rest of the animal kingdom. He has given you a conscience. You know it is wrong to lie, steal, take God’s name in vain, engage in sexual immorality, or hate another human being. You know this because you were created in the image of God, and God is not a liar, thief, blasphemer, fornicator, adulterer, or murderer-at-heart. Because God is good—because He is holy, righteous, and just—He must punish sin. The punishment He has determined for sin is eternity in Hell. God has provided only one way for you to be declared innocent and receive His forgiveness. Your only hope is for Jesus, the God-Man, to save you from the wrath of God. God the Father sent His Son, Jesus Christ, to earth—truly God and truly man, yet without sin. He voluntarily shed his innocent blood and died on the cross, taking upon Himself the punishment you rightly deserve for your sins against God. Three days later, He forever defeated sin and death when He rose from the grave. So, turn from your sin and believe this gospel, as Kevin did, while God has given you time.”

Join Me in Remembering Kevin

Will you join me in honoring Kevin’s memory by distributing the gospel?

With the help of my dear friends, Esley Carrero-Stampek (artwork) and Marv Plementosh (publishing), this special gospel tract is now available for purchase and distribution.

I met Bentley and his grandfather Steve while fishing at Pride Lake, in Scott County Park. This is the story of God's gracious providence. A three-Fold Purpose For me, there is a three-fold purpose … END_OF_DOCUMENT_TOKEN_TO_BE_REPLACED