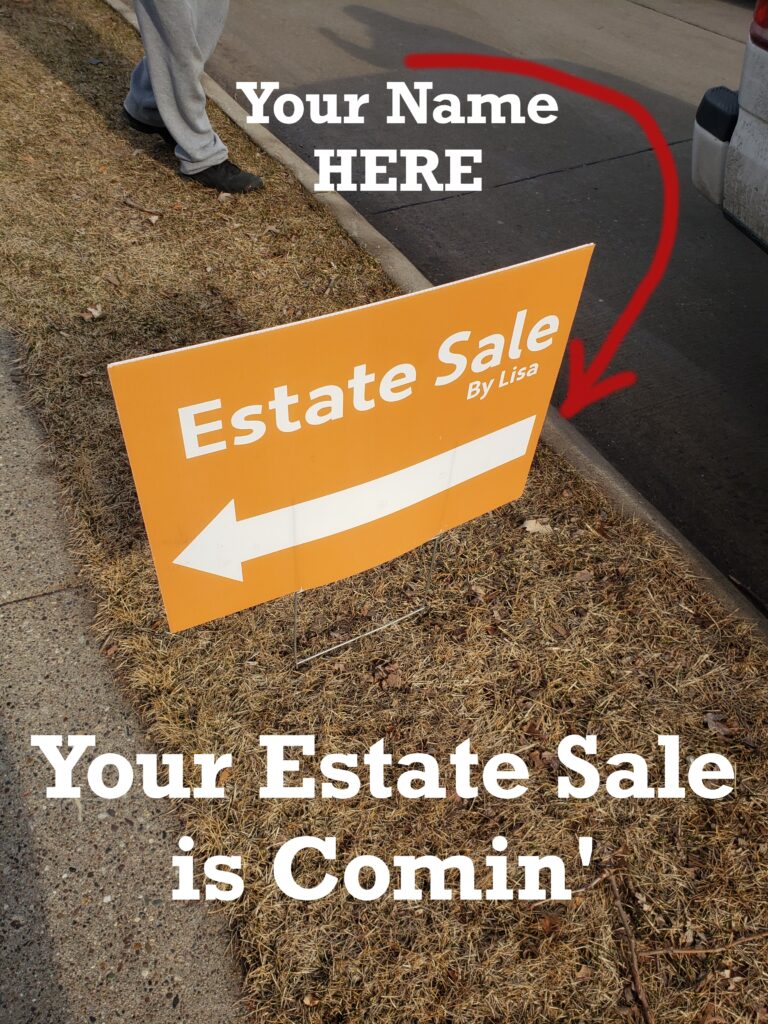 As I took Roxy for a walk yesterday, I saw parked cars lining both sides of a street. A small roadside sign in the distance read “Estate Sale.”

The Last of the Spirits

The scene unfolding before me took my mind to a couple of places. The first place, I will discuss shortly. the second place was to a similar scene in Charles Dickens’s classic work, “A Christmas Carol.”

Mrs. Dilber was next. Sheets and towels, a little wearing apparel, two old-fashioned silver teaspoons, a pair of sugar-tongs, and a few boots. Her account was stated on the wall in the same manner.

“I always give too much to ladies. It’s a weakness of mine, and that’s the way I ruin myself,” said old Joe. “That’s your account. If you asked me for another penny, and made it an open question, I’d repent of being so liberal and knock off half-a-crown.”

“And now undo my bundle, Joe,” said the first woman.

Joe went down on his knees for the greater convenience of opening it, and having unfastened a great many knots, dragged out a large and heavy roll of some dark stuff.

“What do you call this?” said Joe. “Bed-curtains!”

“Ah!” returned the woman, laughing and leaning forward on her crossed arms. “Bed-curtains!”

“You don’t mean to say you took ’em down, rings and all, with him lying there?” said Joe.

“You were born to make your fortune,” said Joe, “and you’ll certainly do it.”

“I certainly shan’t hold my hand, when I can get anything in it by reaching it out, for the sake of such a man as He was, I promise you, Joe,” returned the woman coolly. “Don’t drop that oil upon the blankets, now.”

“Whose else’s do you think?” replied the woman. “He isn’t likely to take cold without ’em, I dare say.”

“I hope he didn’t die of anything catching? Eh?” said old Joe, stopping in his work, and looking up.

“Don’t you be afraid of that,” returned the woman. “I an’t so fond of his company that I’d loiter about him for such things, if he did. Ah! you may look through that shirt till your eyes ache; but you won’t find a hole in it, nor a threadbare place. It’s the best he had, and a fine one too. They’d have wasted it, if it hadn’t been for me.”

“What do you call wasting of it?” asked old Joe.

“Putting it on him to be buried in, to be sure,” replied the woman with a laugh. “Somebody was fool enough to do it, but I took it off again. If calico an’t good enough for such a purpose, it isn’t good enough for anything. It’s quite as becoming to the body. He can’t look uglier than he did in that one.”

Scrooge listened to this dialogue in horror. As they sat grouped about their spoil, in the scanty light afforded by the old man’s lamp, he viewed them with a detestation and disgust, which could hardly have been greater, though they had been obscene demons, marketing the corpse itself.

“Ha, ha!” laughed the same woman, when old Joe, producing a flannel bag with money in it, told out their several gains upon the ground. “This is the end of it, you see! He frightened every one away from him when he was alive, to profit us when he was dead! Ha, ha, ha!”

“Spirit!” said Scrooge, shuddering from head to foot. “I see, I see. The case of this unhappy man might be my own. My life tends that way, now. Merciful Heaven, what is this!”

He recoiled in terror, for the scene had changed, and now he almost touched a bed: a bare, uncurtained bed: on which, beneath a ragged sheet, there lay a something covered up, which, though it was dumb, announced itself in awful language.

The third spirit showed Scrooge the possible, if not the likely scene of his personal possessions being sold before his dead body was even cold.

The Scene at 46th and Warren

My first thought as I saw the cars lining both sides of 46th Street was that someone–a person well-known to many–had recently died. People must have been gathering at the house to pay their respects. Or, the funeral had already taken place, and friends and loved ones were gathering at the deceased’s home to share memories and comfort the family.

Then I saw the “estate sale” sign. My thoughts and emotions quickly moved from compassion to a bit of contempt, especially as I overheard people talking, as they walked back to their cars–newly acquired booty in hand.

“You’re the big winner today!” One woman declared with a raised voice, calling to a man opening his car door across the street.

“Yeah!” He replied. He went on to announce what he paid for the item in his hand, how much it was worth, and how much more he hoped to get for it.

As I got closer to the house, I watched as people, like ants scurrying away from a picnic haul with pieces of food in their mandibles, items that once belonged to someone else. Pots and pans. Small appliances. Pieces of furniture. And other household items. Another line of empty-handed people made their way into the front door of the house, all hoping to leave with a little less money and a little more stuff.

Christian: Your Estate Sale is Comin’

Not everyone who passes away will precede an estate sale of their earthly belongings. However, everything a dead person ever owned goes to someone else. Family. Friends. The government. Charities. American Pickers. Other strangers. While some materialists request to be buried with their Harley’s (the ancient Egyptians called them “chariots”), you will likely never see a hearse towing a UHaul trailer.

The old adage is true. You can’t take it with you.

But, Christian, you already know this. Don’t you?

Yet, how are you living? Are you living as someone who will be clothed only in the righteousness of Christ (Romans 3:25-26; Galatians 3:27) when you stand before God? Or, are you living as one who hopes to bring at least a carry-on for that flight? Are you storing up treasures on earth or treasures in heaven?

Are you filling your earthly storehouses with personal trophies of accomplishment, wealth, hobbies, legacy, covetousness, and/or inheritances for future generations? Are you doing so well with that that you need the proverbial bigger barn?

And He told them a parable, saying, ‘”The land of a rich man was very productive. And he began reasoning to himself, saying, ‘What shall I do, since I have no place to store my crops?’ Then he said, ‘This is what I will do: I will tear down my barns and build larger ones, and there I will store all my grain and my goods. And I will say to my soul, “Soul, you have many goods laid up for many years to come; take your ease, eat, drink and be merry.” But God said to him, ‘You fool! This very night your soul is required of you; and now who will own what you prepared?’ So is the one who stores up treasure for himself, and is not rich toward God” (Luke 12:16-21).

God’s Word is clear. The person for whom worldly wealth and the gathering of goods is the priority, no matter how much he (or she) tries to gussy up the gluttonous pig called Gimme-More with the lipstick of spirituality, that person is not rich toward God.

Might I have seen you in line for the estate sale yesterday, Christian, not to pay your respects and condolences, but to pay for stuff–not to try to make a disciple through the proclamation of the gospel, but to make a deal? Might I have seen you there to buy a dead man’s stuff just to one day be the dead man whose stuff is sold?

“For where your treasure is, there your heart will be also” (Matthew 6:21).

Christian, your estate sale is comin’.

“Then He said to them, ‘Watch out and be on your guard against every form of greed, for not even when one has an abundance does his life consist of his possessions'” (Luke 12:15).

“I tell you that to everyone who has, more shall be given, but from the one who does not have, even what he does have shall be taken away” (Luke 19:26).

It is both temporally and eternally better to be rich toward God than to have barns filled with earthly treasures.

One Way to be Rich Toward God: Evangelism

There are certainly many ways to be rich toward God.

Another way to be rich toward God is by evangelizing the lost. Of course, you knew I was going to go there.

The two greatest commandments are to love God and to love people.

“But when the Pharisees heard that Jesus had silenced the Sadducees, they gathered themselves together. And one of them, a scholar of the Law, asked Him a question, testing Him, ‘Teacher, which is the great commandment in the Law?’ And He said to him, ‘”You shall love the Lord your God with all your heart, and with all your soul, and with all your mind.” This is the great and foremost commandment. And the second is like it, “You shall love your neighbor as yourself.” On these two commandments hang the whole Law and the Prophets'” (Matthew 22:34-40).

We do what we care about.

The first question in the Westminster catechism is: “What is the chief end of man?” Answer: “Man’s chief end is to glorify God, and to enjoy him forever.” All of the before-mentioned ways to be rich toward God have as their motivation and at their core the Father-given, Son-provided, Spirit-wrought desire to bring God glory. The great, eternal benefit of glorifying God is enjoying Him forever.

If we truly love God, if we want to glorify Him and enjoy Him forever, then we will be compelled to tell others about the greatness of our God. The struggle for the Christian shouldn’t be in what to say. Rather, the struggle should be to keep from talking about Him, extolling Him, exalting Him, declaring Him, representing Him, worshiping Him (publicly).

Sadly, for most professing Christians (so it seems), they have it backward. They struggle to make much of Christ outside a Sunday service, to a lost and dying world. And they don’t seem to struggle to keep their mouth shut.

Again, we do what we care about. Transversely, whatever we don’t do, when speaking of those things we should do according to God’s Word, we don’t care about. We don’t care, no matter how much we pontificate to the contrary.

Too often we as Christians fill our barns with meaningless treasures.

I want to be rich!

There; I said it.

You should want to be rich, too.

Like you, my fellow Christians, my estate sale is coming. I hope when that day comes there will be far less for the world to rummage through and far more that brings God glory.

“And the slave said, ‘Master, what you commanded has been done, and still there is room.’ And the master said to the slave, ‘Go out into the highways and along the fences, and compel them to come in, so that my house may be filled'” (Luke 14:22-23).

Ten years ago I had a conversation with a Boise State University student named Mohammed. The Lord is still using it. A Recent Email Recently, I received an email from a man named Ali--a Christian … END_OF_DOCUMENT_TOKEN_TO_BE_REPLACED